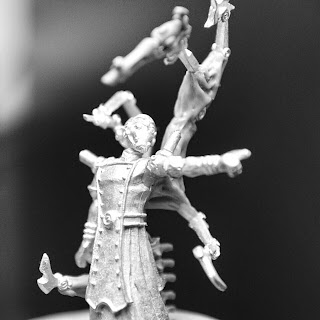 As soon as I saw these guys, I thought they'd make perfect Haemonculi.

In the fluff I've created for the Coven of the Unmarred, one of my main juxtapositions/weird and hideous bits of creative reasoning is that the Coven is obsessed with perfection. Well, at least the Coven's master Haemonculi/Coven Archon are. It's a kind of pyramid scheme, I guess, wherein the Dark Eldar at the highest level of Coven get to be pretty (or "unmarred") because of all the hideous experiments that have been attempted on the twisted creatures beneath them. 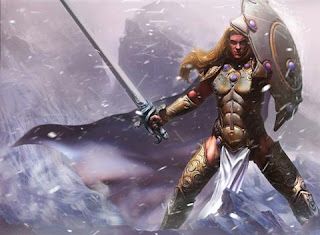 Narcysus, High Lord of Flesh, tolerates having his mutated and tortured disciples around him as his own beauty is reinforced in comparison to them, but he refuses to tolerate their marred faces. 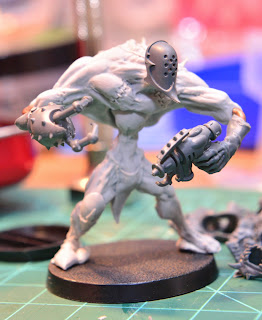 This is a good explanation for the masks worn by the Wracks and Grotesques naturally, and it also gives me a theme I can carry over to the rest of the Coven, where anyone who has their face uncovered must live up to Narcysus' standards of beauty. 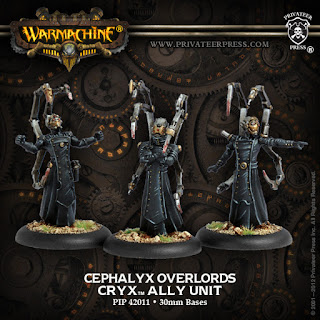 When looking for alternate Haemonculus models, I stumbled upon the cephalyx overlords, and I was instantly sold on their labcoat-like robes. They also fit my "anything hideous must be masked" fluff.

The only issues was that they were a bit too neat and tidy to be Haemies straight out of the box. Also, though their additional limbs were nice they were far too mechanical and needed to be fleshed up, and they needed a sump for them to be sprouting from.

Here's how my first Cephalyx Haemonculus came out. 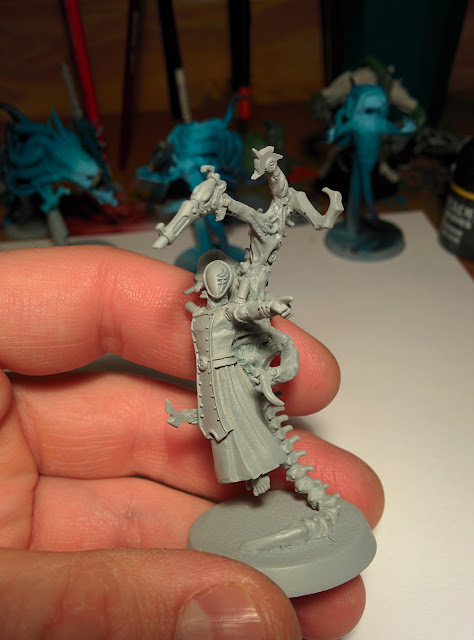 The cephalyx are a little short, so I added some height by picking up on the Haemonculus levitation/feet never touching the ground fluff. To make the levitation happen, I pressed a Nagash spine into service, cutting between the vertebrae, and using a pin vise to drill holes through them to accommodate a piece of wire. This let me re-position the spine as needed. I also used some Hellion bare feet to complete the levitation look since the Cephalyx models don't have feet. 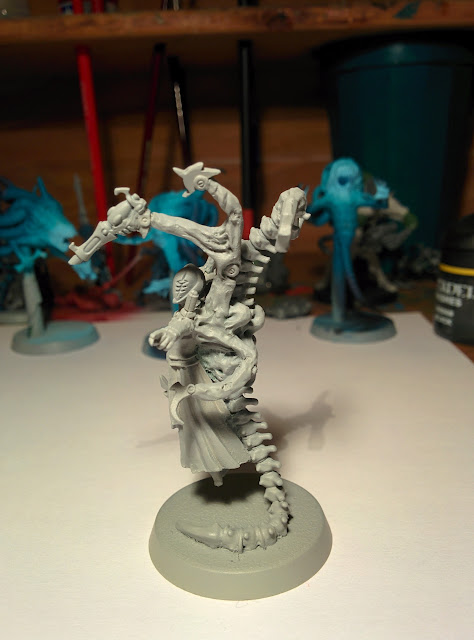 I added another spine above the first to extend it from the Haemonculus' sump, then crowned it off with a savage orc bow. I'm really happy with the effect as it's reminiscent as some of the really awesome spines illustrated in the Haemonculus Covens book. 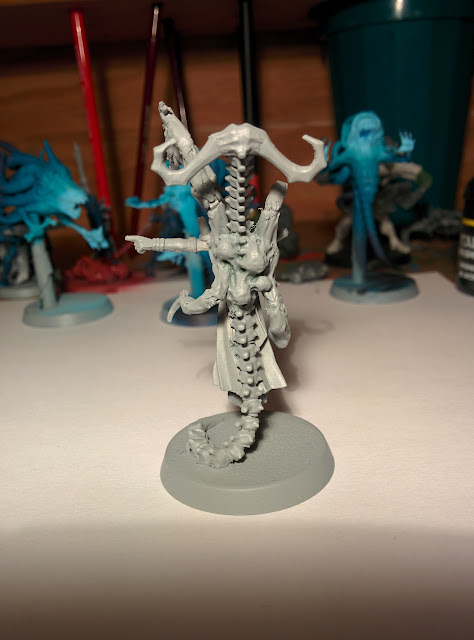 The goal with this Haemonculus was, well, to just have one done. I've spent months, off and on, over years converting Wracks, Grotesques, Raiders, Warriors, Wyches, Clawed Fiends and Urghuls, Mandrakes, Cronos for the coven, but I hadn't built a single Haemonculus! That seemed a bit wrong. I wanted to get this one done mostly as a proof of concept, so he isn't my best work, but, well, he's done.

He's also got a friend since I was so happy with the way he turned out once I added the spinal column and orc bow above his head that I wanted to try it on another model. Enter the Finecrap Finecast model that I was generously gifted by Thor on The Dark City in last year's Secret Santa Space Raid. 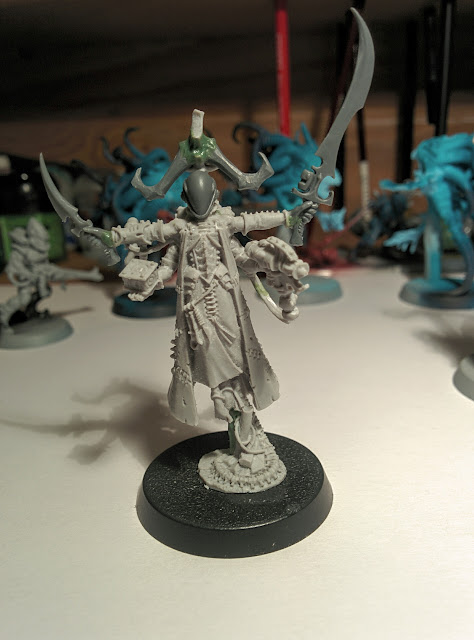 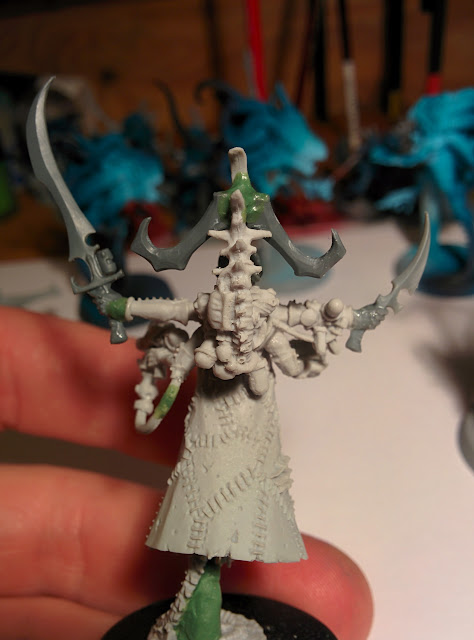 I can take no credit for the very imposing pose. I 100% cribbed it from this very nice Haemonculus conversion. I'm no longer sure where I found it, but I believe it was on the Dark City, and I wanted to give credit where credit is due because it makes the Finecrap Finecast Haemonculus so much better. 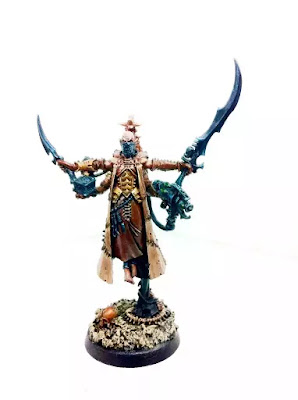 The creator also made the following Haemonculus, which is pretty nice: 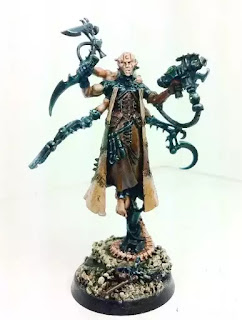 Here's a shot of the pair of my Haemonculi: 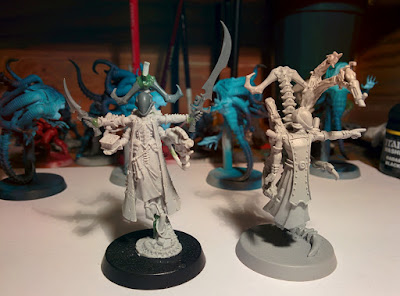 What do you folks think of them? As I'm trying to put together the coven to end all covens, they will likely be followed very soon by some more Haemonculus friends (I think I have six or ten Cephalyx to get through!).