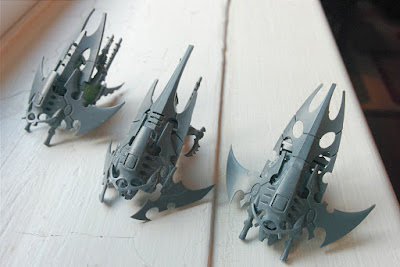 In my ongoing quest to convert haemonculus coven versions of every dark eldar unit in the codex, I've been rolling around the question of reavers for a long time. Well, I always knew that I wanted to convert them to look something like miniature Talos, but I wasn't sure how I was going to pull it off.

Until one day a couple of weeks back when I was just messing around with a Hellion skyboard and a reaver jetbike canopy. I placed the skyboard on top of the canopy, and—BY GOD—it just...fit. As in the two model components pretty much slid together like they were meant to be that way. 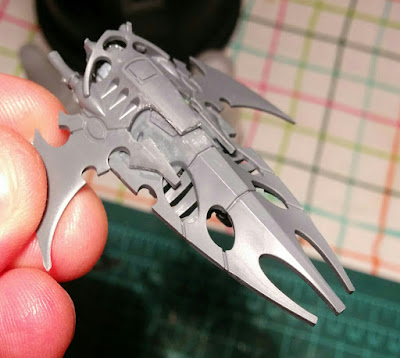 All that was required was some slight trimming of the underside, and VOILA! MICRO RAZORWING JET FIGHTERS!

I was ecstatic. So much so that I quickly slapped together two more of them from the reaver canopies I had lying around: 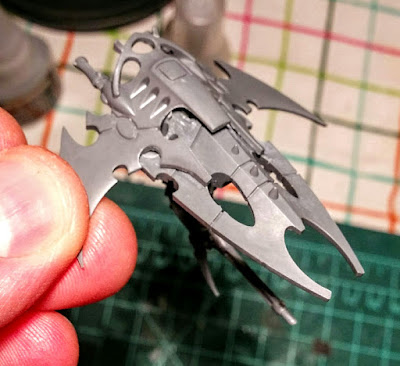 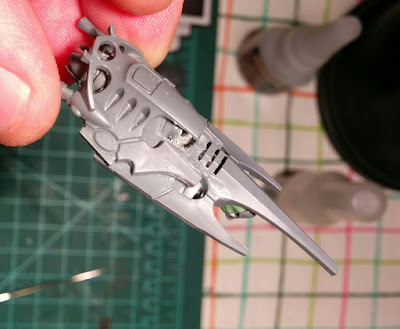 That last one had its "wings" facing the wrong direction, so it's awaiting a suitable graft of reaver bladevanes.

But what to do about the riders? Picking up on the Talos theme, I wanted the riders to be fused into the mechanics of the jet fighters underneath. It would imitate the way that the talos kind of hangs down from its mechanical carapace, and it wouldn't distract from the jet-like profile of the upper side of the model. In fact, it was as if my idea were meant to be as there is a little cavity beneath the canopies in the perfect place for a head!

I could have messed around with some torsoes to squeeze them in under the canopies, then fill in the rest with greenstuff, but my work on the coven mandrake conversions taught me that all that cutting down is more trouble than its worth.

So I filled in the space with aluminum foil (the cheap sculpting filler of champions), sucked it up, and tried sculpting some chest/stomach musculature for the pilots, and it came out way better than I had expected it would. 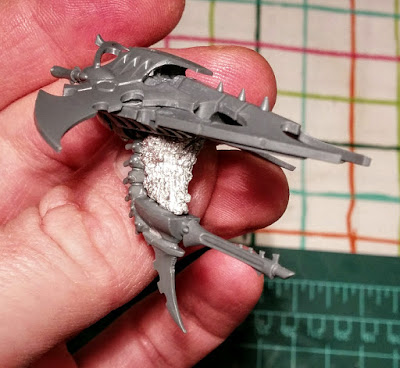 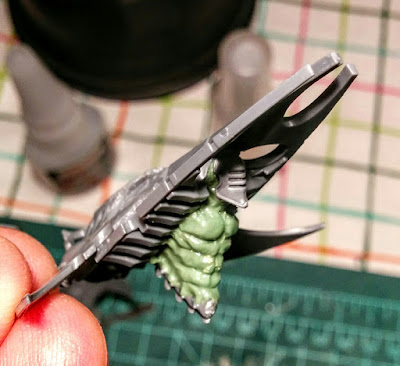 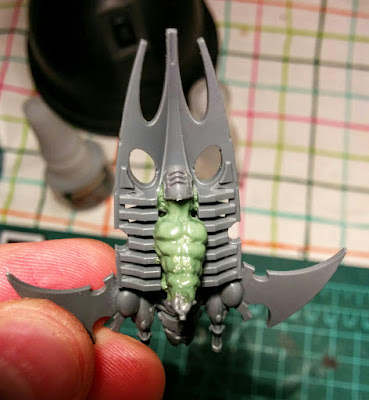 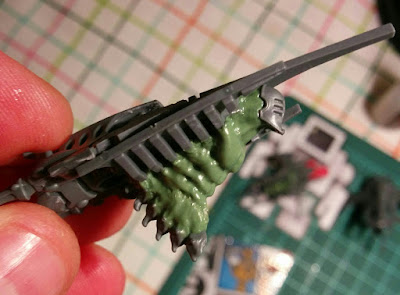 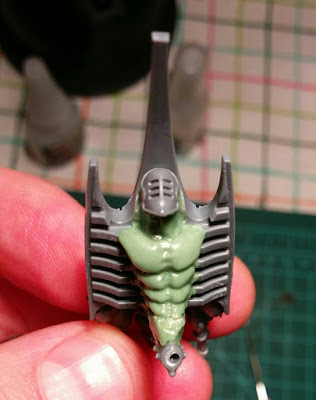 For the spinal columns on the back of the models that connected down to the weapon pod, I could well have sculpted that, too, but I had some Nagash spinal columns lying around, and they allowed me to count out vertebrae to make sure all the spines were a similar length. 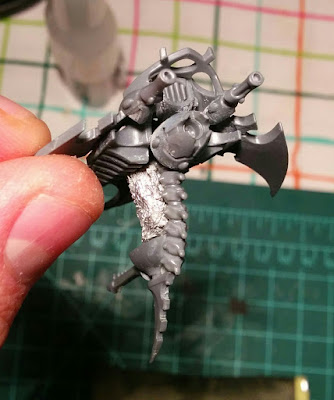 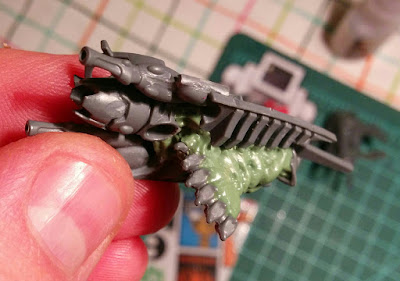 My main concern with the models, which I posted about on The Dark City forum, was whether they needed arms, to hold the requisite splinter pistol and CCW to identify them as reaver jetbikes, or whether that was already implied enough and I could leave aerodynamic stumps where arms should be. Here are the photos I gave for consideration: 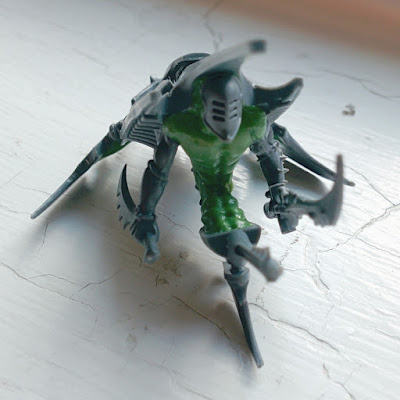 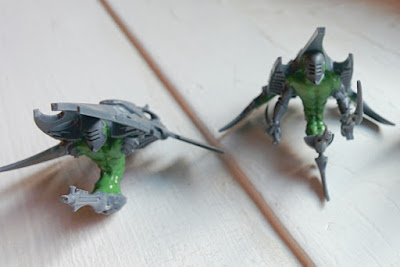 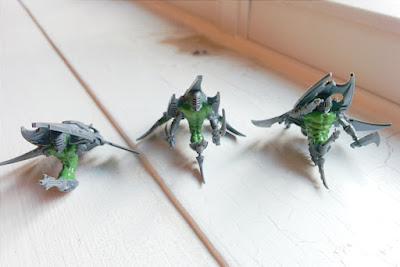 I'm leaning toward the more aerodynamically friendly while also horrific armless/stumpy wonder. I figure that, if you look at a reaver pilot, he/she isn't prominently holding a splinter pistol or a CCW, so why should I bother. If I do include arms, I will save them for the Arena Champions so that I can differentiate them.

What do you folks think?

I've been, quite literally, going like STINK on these models because I was so excited with them, so I only bothered to take some really poor cell phone photos of them completed before moving on to priming and painting. 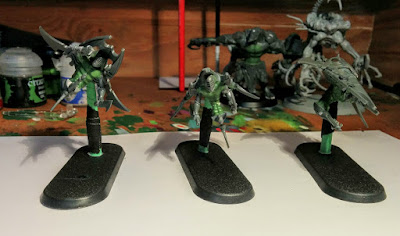 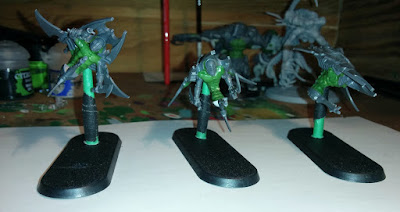 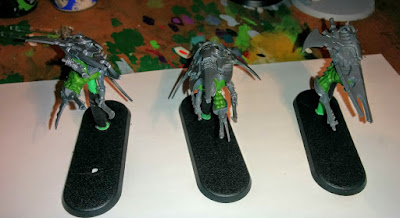 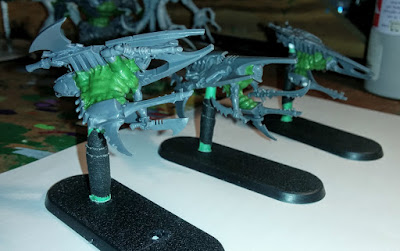 That being said, I have since passed these bad boys under the airbrush. Though they're one of my first airbrushed models, I don't know if I did it right, but I like the look of them >:) 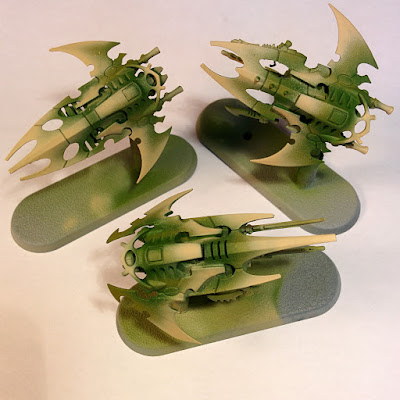