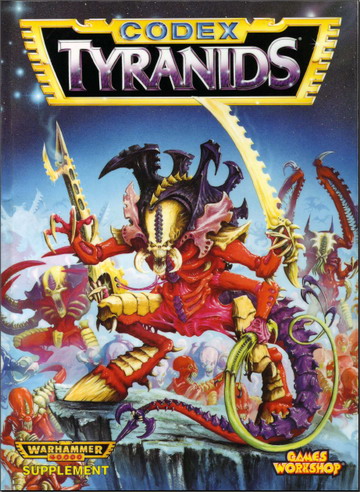 (Also known as Warhammer 40k, The Codex Era, and You Can Have As Many Of That As You Like)

The second generation of Tyranids was ushered in by the army's first codex. What a lovely tome that was, allowing everything from Warriors through to Lictors, Zoanthropes, Carnifexes, and Hive Tyrants access to Tyranid-specific Wargear called "biomorphs." As this was second edition, these biomorphs were not your simple +1 Str improvements, they were mad abilities like feedback-causing forcefields and ranged bioplasma attacks that you could mix and match on some of the larger creatures. They were as far beyond our current biomorphs as a conversion beamer is beyond a bolt pistol.

But I digress. This series is meant to be about the evolution of Tyranid models, not about the unique rules that we loved and lost along the way. However, it was a theme of the 2nd Edition of 40K that you could give units some pretty amazing options. This was also the era before force organization charts, when there were suggested ratios for how much of your force should be made up of troops or heavy support, and Hive Tyrants were limited to something like 1 per 1000 points, but you were still able to do mad, broken things like fielding 4 Lictors in one army. Come to think of it, 2nd Edition seems to be the last time that anyone would want to have 4 Lictors in one army.

Yes, second edition gave birth to the Tyranid army in earnest with the introduction of the Tyranid Codex. We received our first plastic kits in the form of Genestealers (though these probably first appeared in a space hulk revision), Termagants, and Warriors. 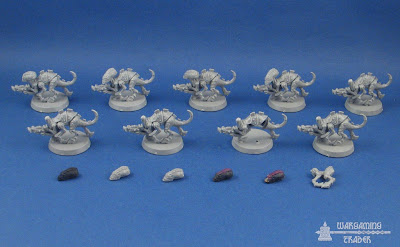 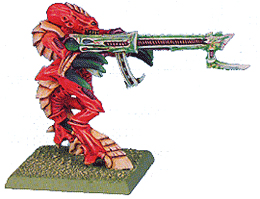 METAL WARRIOR W VENOMCANNON
Though we had to put up with the big, floppy, rubber-suit-looking warrior banana claws, the Tyranids had finally started to receive some half-way decent shooting support, which was further bolstered by the introduction of the first real general for the swarm: the Hive Tyrant. 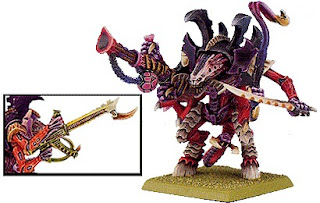 METAL HIVE TYRANT W BARBED STRANGLER, BONESWORD & LASH WHIP (INSET: VENOM CANNON)
He was a combat monster who could load up on biomorphs, psychic powers, combat weapons, AND some of the longest ranged weaponry we'd yet seen. Well, some of biggest guns we'd seen until a later release expanded the range to include the Biovore and Zoanthrope, two "gun beasts" that would become mainstays of hive fleets everywhere.

With all this added shooting, the close-combat nature of the Nids was not forgotten. Second edition saw the introduction of the one the sneakiest weapons in the Tyranid arsenal, the Tyranid Lictor. I still believe that all of the fear of lictors that remains these days has been carried over from way back in the day when a lictor could really tear you a new one. Lictors have never measured up to the terror their were in 2nd Ed., a fact that I believe is illustrated by the fact that I stripped all four of my lictors to repaint them for third edition, then never bothered getting around to it as each subsequent iteration of the Tyranid codex has made them less and less impressive. 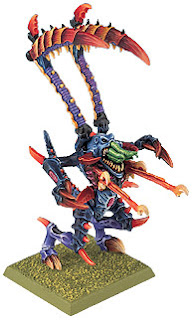 
Fun Fact: I once heard that when Jes Goodwin and another artist were coming up with the concept for the Lictor, they were heavily inspired by The Creature From The Black Lagoon.

Our combat organisms were also bolstered by a leap-y, cannon-fodder, combat unit to run along beside the cannon-fodder, shooty termagants: the hormagaunt.


Fun fact: these METAL models were the tippiest Tyranid models of all time until the 3rd edition Zoanthrope came around. I think they may have been the first models to force the invention of the practice of gluing washers to the bottom of bases to weight models.

What's that you say? Those Hormagaunts look a little something like Alien Xenomorphs from the Alien movies? Why--fiddledy-dee--whatever do you mean?


In second edition, the Tyranids received their first air support in the form of Gargoyles. These metal models were hell for mounting on flying stands as they'd easily tip over, often snapping off the flight stands when they did so. That being said, they were kind of hell on the battlefield as well, coming equipped flamespurts, one of the first tyranid weapons to use the flamer template and, as far as I recall, the only shooting weapon that would force all those covered by the template to move to the edge of the template if they survived. What's more, the gargoyles could fly high: essentially disappearing one turn only to deep strike back onto the board the next. 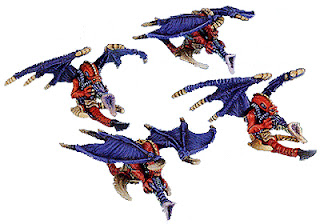 METAL GARGOYLES
Then there were the models that were so aesthetically impressive and whose rules were so inspiring that I forgot to add them to this post and no one noticed they were missing until GW cheakilly recast them in finecast: the Ripper Swarm. The only thing to write home about when it came to ripper swarms in second edition is that they could eat any terrain that was organic, removing it from the board. A friend bought me a pack of these as a birthday gift because he knew I didn't have any. I asked him if I could return it in exchange for something useful like a pewter warrior. 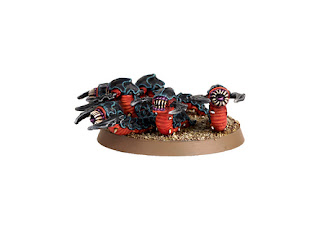 RIPPER SWARMS. THE UNLOVED CHILD OF SECOND EDITION.
To round things out, we had the reintroduction of my favourite model, the Screamer Killer, now as a living creature rather than a biological walker with armour values. He was now called a Carnifex, he had ten wounds and a 2+ armour save that was rolled on 2 dice (effectively rolling it out of 12, which was how Terminator armour used to operate...though in 2nd Edition we used armour save modifiers of -2, -3, etc, rather than the current system of an AP of X negating saves entirely--but I digress). He had a shooting attack in the form of Bioplasma (36" range), and he could make four close combat attacks at Str 7 or combine all four to make a single attack at Str 10. Basically, it was his job to kick ass and take names, which made it all the more hilarious when one of my female friends, upon seeing the model with all those curving, hug-y arms dubbed him "the love bug." 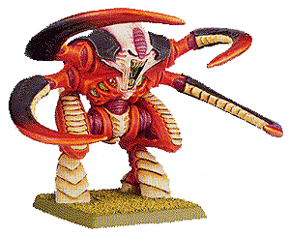 METAL CARNIFEX
And, with the exception of some Genestealer Cult models that I'm not really sure where to slot-in yet, that was the full Tyranid line in second edition. However, second edition was a bit of an Age of Wonders. Not only did you ludicrous rules and wargear that meant special characters who could carve their way through entire armies (don't believe it? I once had to spend half a Tyranid army bringing down Dark Angel Commander Azrael), but there was also Epic, with models so small that you could field entire Space Marine companies on a budget, and imaginations were coming to life in the western United States, where a company was granted a license from Games Workshop to dream bigger than anyone else ever had...

More on what these developments meant to the Tyranids on Friday.
Posted by Mr_Pink at 06:37