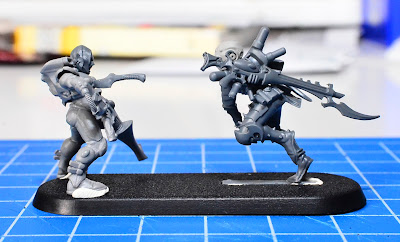 It's about time I got back to my All-Coven Dark Eldar army project. Today I finally get around to reimagining Dark Eldar Warriors from a Coven bent.
Thematically as well as tactically, it makes sense for a Haemonculus Coven that was trying to strike out on its own (as the fluff for mine suggests) to seek out some long-ranged firepower as this is something sorely lacking in all Coven units other than the Talos. Normally, a coven would just ally itself with some kabalites to solve that problem, but I wanted to come up with a team of kabalites who were exclusively dedicated to the Coven of the Unmarred. In exchange for certain enhancements that they wouldn't have otherwise had access to, these kabalite warriors have agreed to serve this one coven exclusively.

I called the unit "The Hunters," and I pictured them as the swift strike force the coven employs to make lightning raids and to harvest fresh meat for the flesh crafters.

Though I could have easily slapped exposed spinal columns and bone wracks on some standard warrior models, I figured there would already be a pile of gibbering, bloody horrors running around in this force, so I took this as an opportunity to dial the hellraizer vibe back a bit. I like the warrior models, so I wanted to use them without cutting them up too much, but I still wanted my models to be recognizably different from standard warriors.

I put this conundrum to Brood Brother Hydra on a 10-hour drive back from New York City last April. The man is a modeling genius, and he quickly noted that the easiest way to break from the Warrior aesthetic is to break up the standard lines of a warrior. He postulated that the easiest way to do this would be to move the splinter rifles from their hands to their backs, and to give them some other weapon to hold, like knives. 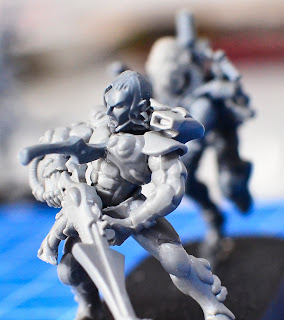 The idea fit perfectly with my concept of these dudes as hunters, so I squirreled it away in my concept bank and kept saying that I would come back to it and produce at least one model as a proof of concept.

Cut to nearly a year later, when I produced this proof of concept model earlier this week: 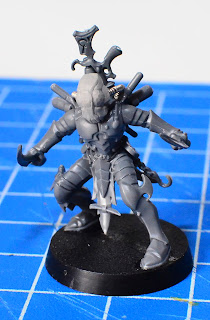 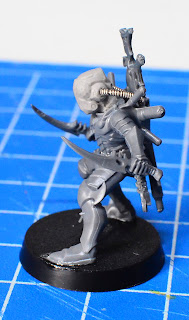 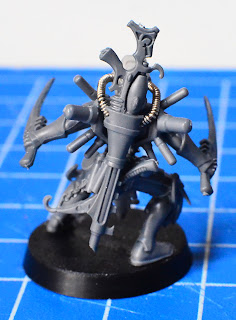 One of the easiest elements of the conversion that I believe pays strong dividends towards linking these guys with the Coven is the use of scourge torsos rather than standard warrior ones. All of those vials harken to the grotesques and wracks, and they go a long way toward illustrating the perks that these warriors get from their service with the Coven.

As for heads, I'm not sure if the insect heads spawned all of these mad ideas, or if they slotted in nicely after, but I love their creepy, bug-y feel. Dark Eldar they're not, really, nor are they, strictly-speaking, coven-like, but I think they do a decent job of representing a kind of heightened sensing array that the Haemonculi could have hard-wired into the Hunters' nervous systems.

Though the model still has a splinter rifle to identify it as a warrior, you can see that they prefer to use their dual knives. If I was concerned about tournaments, I'm sure there would be a problem with modeling a bunch of warriors with two close combat weapons, but as I've used third party heads, you can see I'm not that concerned.

Oh, and I believe that right handed knife is the only one in the Dark Eldar line, but I may have missed another one somewhere. One of the main challenges of this build was to convert up some more right-handed knives, but, fortunately, there are plenty of blades present on DE sprues.

Well, that proof of concept went so well that I was encouraged to bang out a few more warriors. Here's a shot of the first five squad members:

And here are the individual squad members: 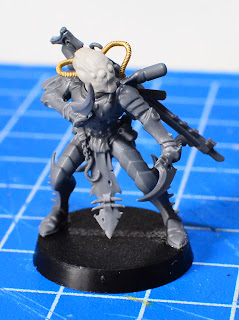 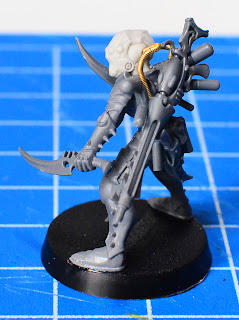 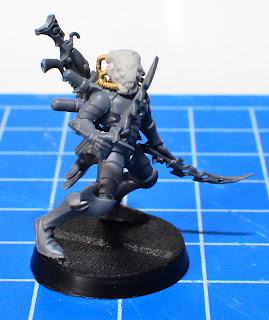 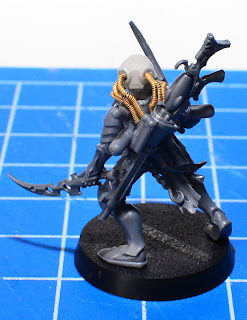 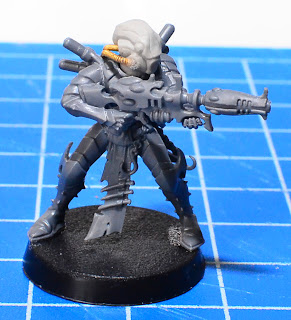 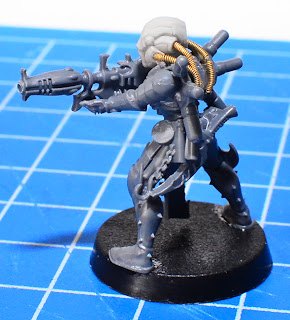 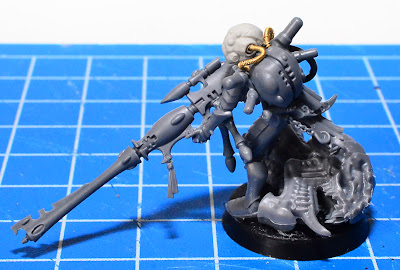 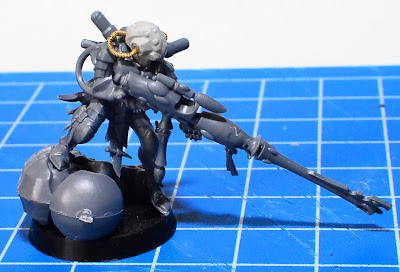 As a nid player, I've got plenty of Carnifex heads lying around for use as trophies/casualties, but if you've been around here for long enough, you've likely already seen that with my Kroot Tyranid Hunter: 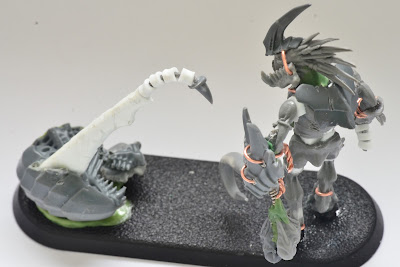 Speaking of trophies, I picture the roll of these Hunters as being, primarily, to harvest more living (if possible) samples for the Fleshcrafting labs back at the lair of the Haemonculi of the Coven of the Unmarred. This next model started out as a rather too ambitious attempt at another unique pain token marker, but I gave up on that concept and just elected to have him be a particularly narrative model: 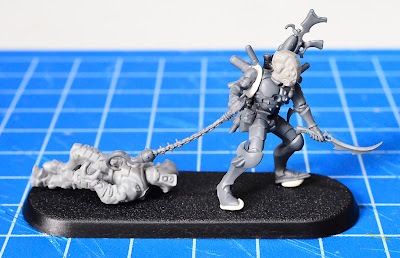 And, though the Hunters are meant to harvest living victims for the Haemonculi, sometimes they have to settle for freshly deceased victims: 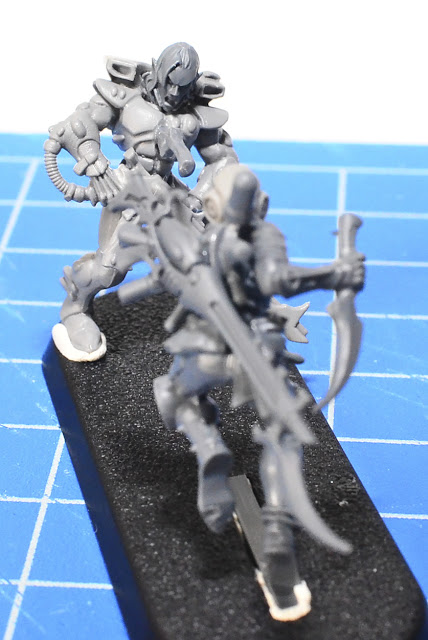 Brother Pink--er, PinkPonny, rather--suggested that it might be cool to have a victim who had just had one of the Hunters' knives thrown into him. As I'm obsessed with the way cavalry bases can be used to portray brief, cinematic, linear scenes, I made his idea a reality, and it is easily my favourite model in the squad! 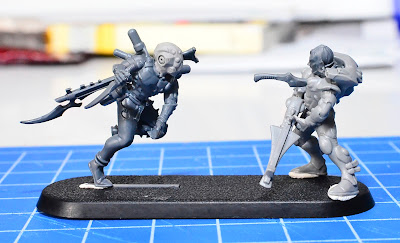 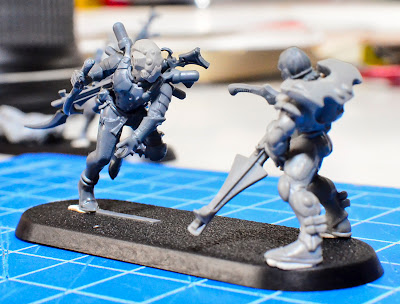 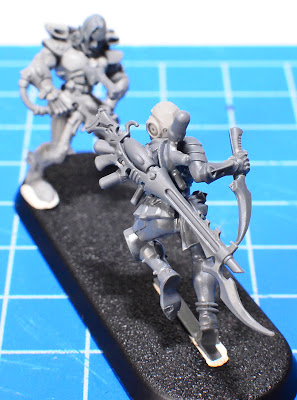 So here are the Hunters, all together, and just waiting for their Sybarite and a couple more members. 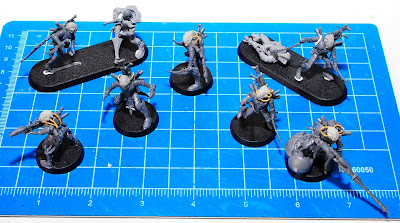 What do you think? Are they covened-up enough?
Posted by Mr_Pink at 12:41