3rd Generation (2001)
(Also known as the Birth of Mutable Genus or What Is The Least Number Of Genuses I Can Get Into An Army, We Can Get Them For You Cheap, and Screw This Grinfex: Where's My Plastic Carnifex?) The third edition codex brought with it a whole world of Tyranid evolutions that we still enjoy to this day. It created Scything Talons and Rending Claws where before there were just Random Slashy Things. The strength of ranged weaponry went from being absolute as defined by gun to being variable as defined by the bearer's strength (Venom Cannons, for example, fired at the strength of the creature carrying them +2, and a devourer on a carnifex was Str 8!). We were introduced to the importance of Synapse and the requisite consequences of Instinctive Behaviour. It was the birth of the Tyranid Monstrous Creature, with its ability to ignore armour and roll 2D6 penetration, and it was the first time Tyrants ever got wings. Genestealers, with their armour-munching rending claws, became the bane of many folks' existence. However, you were lucky if your genestealers ever made it to combat because the newly-introduced, Tyranid-specific "shoot the big ones" (no joke; that was actually the name of it) rule meant that our opponents could ignore standard rules for target priority/screening and fire on any Tyranid unit they liked.

The codex was set up in a similar fashion to others of the era, with a complete list of Tyranid creatures at front of the book, allowing a few options per squad, and you could build a full army from that list.

But then there was this mad, secondary list at the back of the book that fell under the heading of "Mutable Genus List," and it detailed the various "Mutable Genus" species of Tyranid (Gaunts, Warriors, Rippers, Carnifexes, and Tyrants).

Each genus' entry had a stripped-down versions of each creature that you could mutate, using a limited number of biomorphs, into the specific type of spawn you were looking for. The spastic, essentially-broken-but-damn-fun wargear-like Biomorphs of second edition were streamlined and simplified into a list of options available to each of the mutable genus creatures. Each option could be taken once and would affect a given statistic (Str, Ini, WS, BS, etc). Weapons "slots" were also standardized with gaunts having access to one option while larger creatures gained access to two.

It was a brilliantly Tyranid idea. Not only did the codex give wider access to biomorphs, but with the mutable genus rules, Tyranid players could guide the evolution of their swarms. What's more, these mutable genus creatures could be combined with the "fixed genus" or vanilla creatures from the front of the book. There was even a system for achieving special, individual, mutant creatures based on the number of species you had in your army vs the number of wounds you had in a unit. These mutants could take the form of Hive Nodes to include a single creature with LD10 to help with Synapse/Instinctive Behaviour. They could have Acid Blood to damage opponents when they were slain in close combat. Or, best of all, they could be Weapons Beasts, which gained them access to any Tyranid weapon, so you could have one model in a squad of gaunts rocking rending claws or something as absurd as a venom cannon.

It was, as far as Tyranid players were concerned, the COOLEST system. However, it was also a system that was ripe for abuse or plain misunderstanding. Players would strip down their forces to include only 3 or 4 different genuses of Tyranid so that they could maximize on the number of mutants in each squad. Others would try to field mutable genuses/swarms that were illegal, claiming that the mutable genus rules were too complicated. The most popular abuse was filling squads of combat units with hidden rending claw mutants (mostly among hormagaunts or the wound-rich rippers) as rending claws were the best bet Tyranids had for tearing open tanks at that time.

Thus was one of the most innovative things to ever happen to the Tyranid swarm lost due to the misunderstanding/abuses of a few players. Even before the 4th edition of 40k was released, the mutable genus rules had been banned at Games Workshop Tournaments.

However, it wasn't all bad. To accompany these mutable genus rules, the father of the swarm, Mr. Jes Goodwin, provided Tyranid players with some of the most mutable models they had ever seen: multi-part plastics for Termagants, Hormagaunts, and Tyranid Warriors.

PLASTIC TERMAGANT {SIC. NOT YET. BE PATIENT}

PLASTIC TYRANID WARRIORS
Granted, some of the models (the warriors) were more modular and multi-pose than the others (the gaunts), but when you're fielding scads of gaunts as cannon fodder, how many poses do you really need? Heck, these plastic models even came with ripper swarms included in the box!

PLASTIC RIPPER SWARM
Fun Fact: when these new plastic gaunts were released, they weren't segregated: you got one box of 16 gaunts, and 8 of them were termags while the other 8 were hormags. Thus, anyone who'd been into Nids since 3rd Edition likely had no problem rounding up enough Termagaunts for their Tervigons as, back when they were trying to pad out their Hormagaunt broods, they'd been forced to buy just as many Termags. Then again, this was the age when the cheapest cannon fodder unit the Tyranids could muster was the spinegaunt (mutable gaunt + spinefist) for the bargain basement cost of 5 points per model, so it's likely a lot of those spare termags saw action as spinegaunts.

Oh, and there were plastic genestealers, too, but they were the same plastic genestealers we'd been using for an age, born of Space Hulk (long ago discontinued) in the distant mists of time. They were even still casting them in that weird-o dark blue plastic until GW realized that they should probably switch them over to the same grey plastic everything else was being cast in to at least give the illusion that they were in some way new. (/rant)

But they came in Hive Fleet Kraken colours now!

SAME. OLD.
And that was the end of the plastic line for the time being.

To compliment the shiny shiny new plastic models, the entirety of the rest of the Tyranid line was redone in pewter, from the somewhat familiar looking Hive Tyrant...

HIVE TYRANT. I PROMISE. DEFINITELY NOT A HIVE QUEEN.
...to the even-more-hellish-to-assemble-and-no-less-tippy metal gargoyles...

GARGOYLES. LET'S SEE HOW LONG THEY STAY AIRBORNE THIS TIME.
...to the Lictor, who, it is my opinion, came with one of the sexiest pairs of rending claws that have ever been cast...

LICTOR. HE COULD BE A HAND MODEL WITH THOSE CLAWS.
...the first of the floaty-brain Zoanthropes (possibly my favourite)...

ZOANTHROPE. LOOKIT ME FLOAT!
...and, finally, the obviously-ork-inspired Biovore, who could now, awesomely, choose between three separate Spore Mine types: the anti-armour, flamer-template Bio Acid; the wounds-all-comers Poison; or the quick-and-dirty Frag.

BIOVORE. NOW WITH ADDED BOOM.
A decent line, all told, but I can't help feeling that the pewter models never really measured up to the quality of those fantastic plastics. It's a niggling thing that, likely, isn't helped any by once having overheard Someone Who Should Know at GW (not a redshirt) commenting on how the 3rd Edition Tyranid line had kind of been rushed out the door.

That being said, rushed or not, there were some new additions to the line in 3rd Edition. We received a much speedier, though less synapseful, warrior-type critter known as the Ravener:

TYRANID RAVENER
Now that the rules had changed, and all our opponents could point their lascannons right at our Tyranid Monstrous Creatures with glee, the Hive Tyrants gained a few ablative wounds in the form of their first retinue, the Tyrant Guard, who came equipped with a lash whip, a rending claw (one), and the newly invented spineshield (basically a fancy spinefist).

TYRANT GUARD
But, coolest of all in 3rd Edition, was the fact that the Tyranids received their first independent characters...of sorts. They were unique mutations that were limited to only games of a certain size. There was the carnifex Old One Eye, who is still kicking around in our current codex and whose model I'll get to later, but the real star of the show was The Red Terror.

THE RED TERROR
This bad boy was meant to be a massive Ravener who made a habit of swallowing his prey whole--a fluffy bit of backstory that was actually reflected in the rules for the model. Should you hit home with four attacks, you could instead elect to use a single swallow attack to remove your opponent from combat as the Red Terror gobbled him down. Now that's a cinematic way to rid yourself of a powerfist.
Oh, what? Carnifex? Oh, yeah, I guess there was a new carnifex released in third edition. The only problem was that in the interim between the release of the 2nd and 3rd edition Tyranid codexes, I'd picked up a little book of Games Workshop art entitled Inquis Exterminatus, and somewhere near the back of the book I came across this: 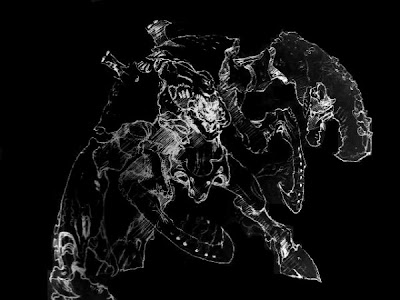 ...and it was the most bad-ass, face-ripping, carni-fexing thing I had ever freakin seen. It haunted my dreams every night. It had to be the direction that Games Workshop was going to take the Tyranids' biggest, baddest killing machine!
And then they released this:

THAT'S NO CARNIFEX.
The Grinfex. The most disappointing bit of this line (and that's saying something--did you see those guard?). I mean, they tried to bad-ass him up a bit (and, perhaps, get him a little more in line with that sketch) by tearing out one of his eyes, slapping some barnacles on him, giving him some crushing claws, and calling him Old One Eye... 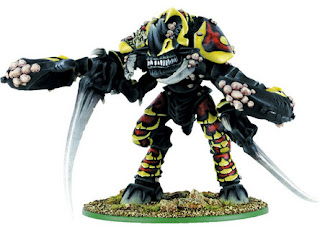 OLD ONE EYE? OLD STINK EYE IS MORE LIKE IT.
...but I still wasn't having any of it (though I did take a run at making the fex of my dreams with Hel). Likely, that's not fair, and after seeing that Dave Gallagher sketch, it's likely that nothing would have ever lived up to my expectations for the carnifex. To make matters worse, this was back before the draconian rules about rumours, and I swear that Jes Goodwin would run his mouth at any event he attended about how they were working on a plastic carnifex, and how it was right around the corner, and how--MY GOD--it was going to change our lives.
...and that freakishly talented git was right, but that's a story for next week.
Posted by Mr_Pink at 05:00