EDIT: I updated this article on 12/28/2016 with a new options and some more pics, and I'll try to continue to keep it updated as it's one of the most popular posts here.

Anyone familiar with the Dark Eldar scene knows that there is one big, burning question from anyone with eyes, limited funds, and even a passing sense of aesthetic rigour.

What am I going to use to convert Grotesques?

"But," I hear you saw, "GW already HAS a model for Grotesques."

Yes, that is true, but the thing is expensive, statically-posed, lacking on additional bits, and, well, UTTERLY GROTESQUE! 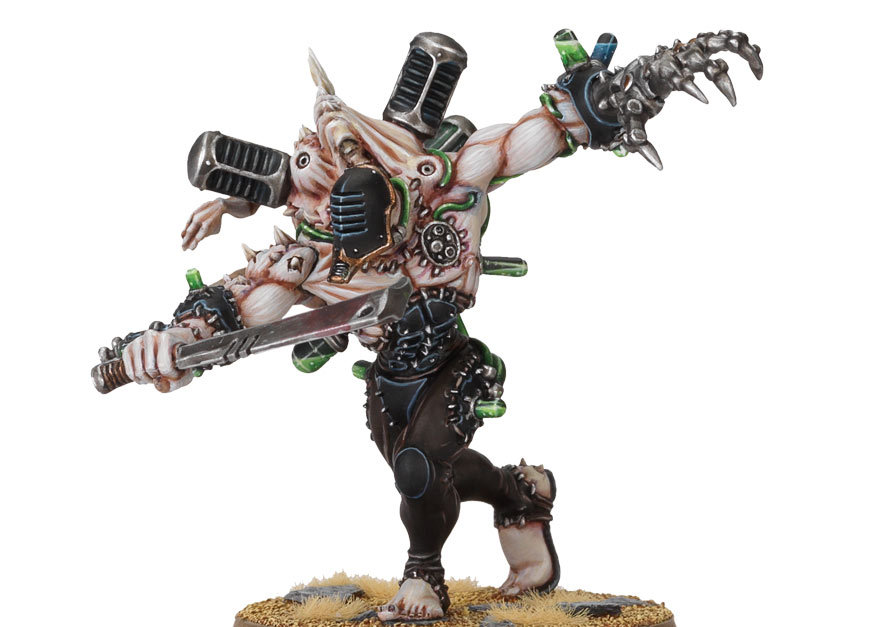 I that way I guess it's perfect for representing the unit that it is meant to, but I certainly cannot respectfully field that "Breakdancing Bigfoot"(TM someone brilliant who isn't me) in my army—particularly when I put so much work into converting so many of my models.

Long ago I settled on a more promising alternative base model from which I could convert grotesques: the now-sadly-long-OOP (hence why I numbered them option 0) Paulson Games Bioterror: 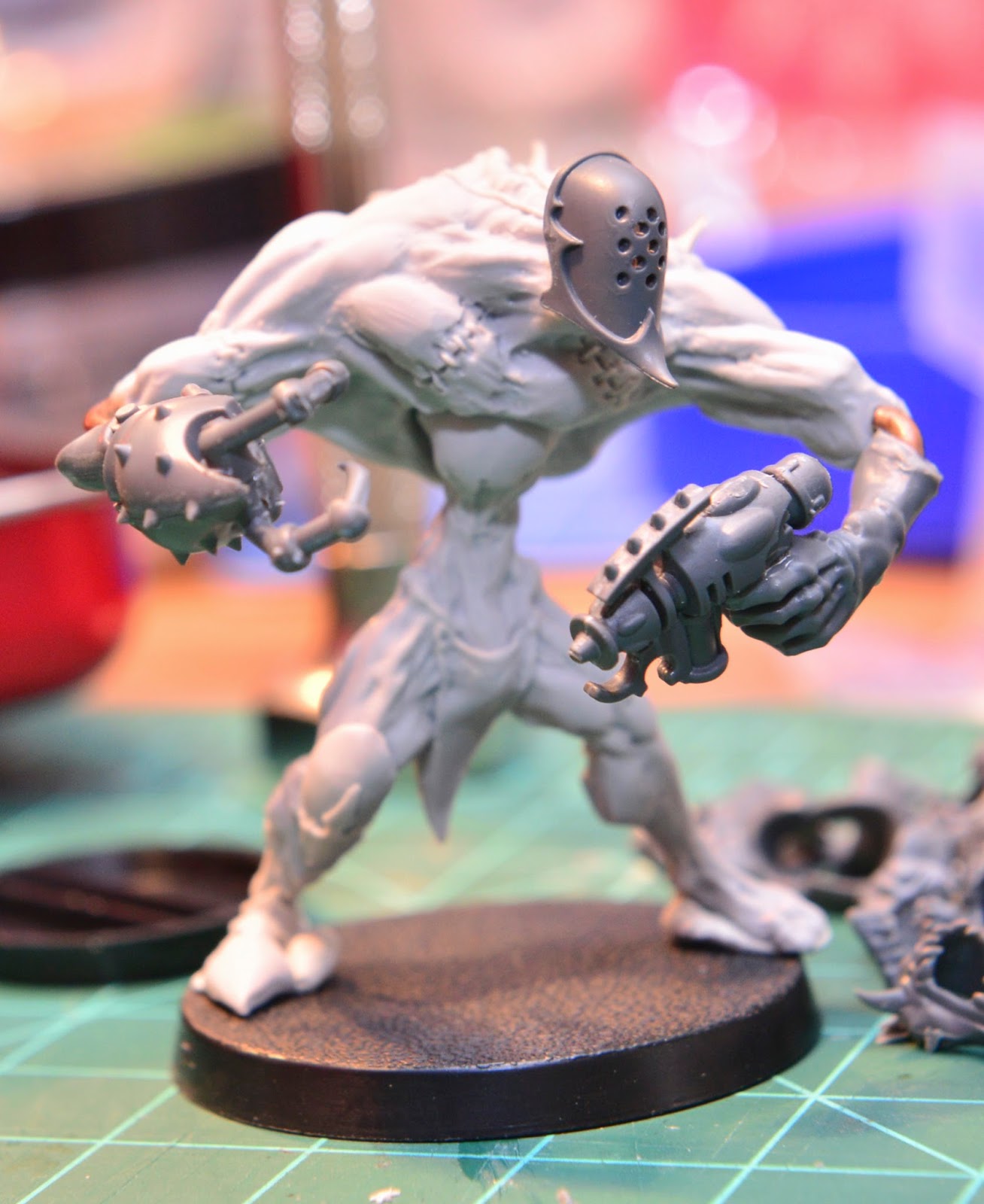 But, of course you know about that since I've already detailed my decision to use them here, and the finished products of my last round of grotesque conversions here. 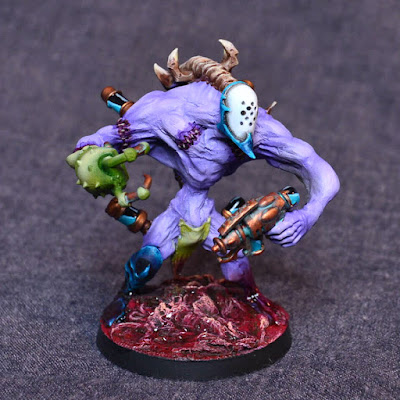 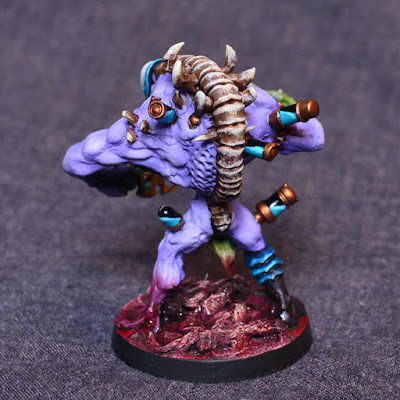 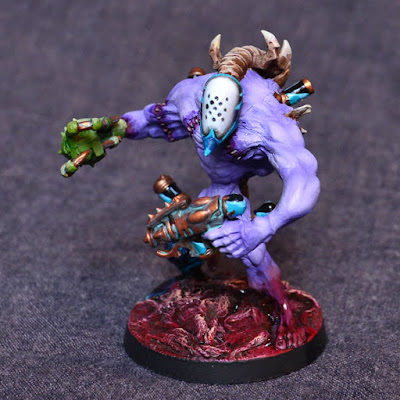 So why rehash that now? Because the idea to convert Grotesques from Paulson Games Bioterrors was just the beginning. That was the easy bit. My real fit of madness came with the idea that there needs to be other places where Grotesques show up in the Dark Eldar list because what self-respecting Haemonculus doesn't want more giant walls of twisted flesh running around?

I've mentioned this a bunch of times in different places before, but for the sake of completeness, I'll restate it here. There are at least two other entries in the codex that are BEGGING to have Grotesques stand in for them because the statlines are so similar.

1) Crypt Fiends/Vargheist (Count as Clawed Fiends in my Coven)

This one requires less of a leap. The statlines are similar, they are both mounted on a larger base, and though there are defined beasts that Beastmasters are meant to use in the codex, I feel like Beastmasters would happily bring on all kinds of beasts, and the Clawed Fiend statline is just meant to represent the idea of a large beast, just as the Khymera statline represents a medium beast, and the Razorwing statline represents a small/swarm beast. In my mind you could just as easily represent the three levels of beast with ever larger rat models.

I have Coven-themed ideas for the small and medium beasts as well, which I'll get into in a later post, but I wanted to start with a way to rep the large beast and to use the entry to sandwich in more Grotesques. In my Coven of the Unmarred fluff, I talk about how the Coven draws a lot of its flesh stock from a real-world bits bin, which is called The Pit. When the master Haemonculi of the coven are dissatisfied with one of their creations, or with a particular creature from the Real Space harvests, they chuck it into The Pit.

This pit is watched over by Pit Masters (see where I'm going with this), and, should any hideous horror ever manage to claw its way out of the seething mass of The Pit, the Pit Masters reward it by pressing it into service as a beast in real-space raids >:)

The largest of these creatures are grotesque-size creatures referred to as "Abominations." They may have once been promising grotesque candidates, or they may be smaller, wrack-sized constructs that have swelled in size by eating their way through The Pit. Picture them like Grotesques, except hideously savage. I'll be repping them with the following conversion from a Crypt Fiend/Vargheist (though this is still early days and he'll have more stuff added to him): 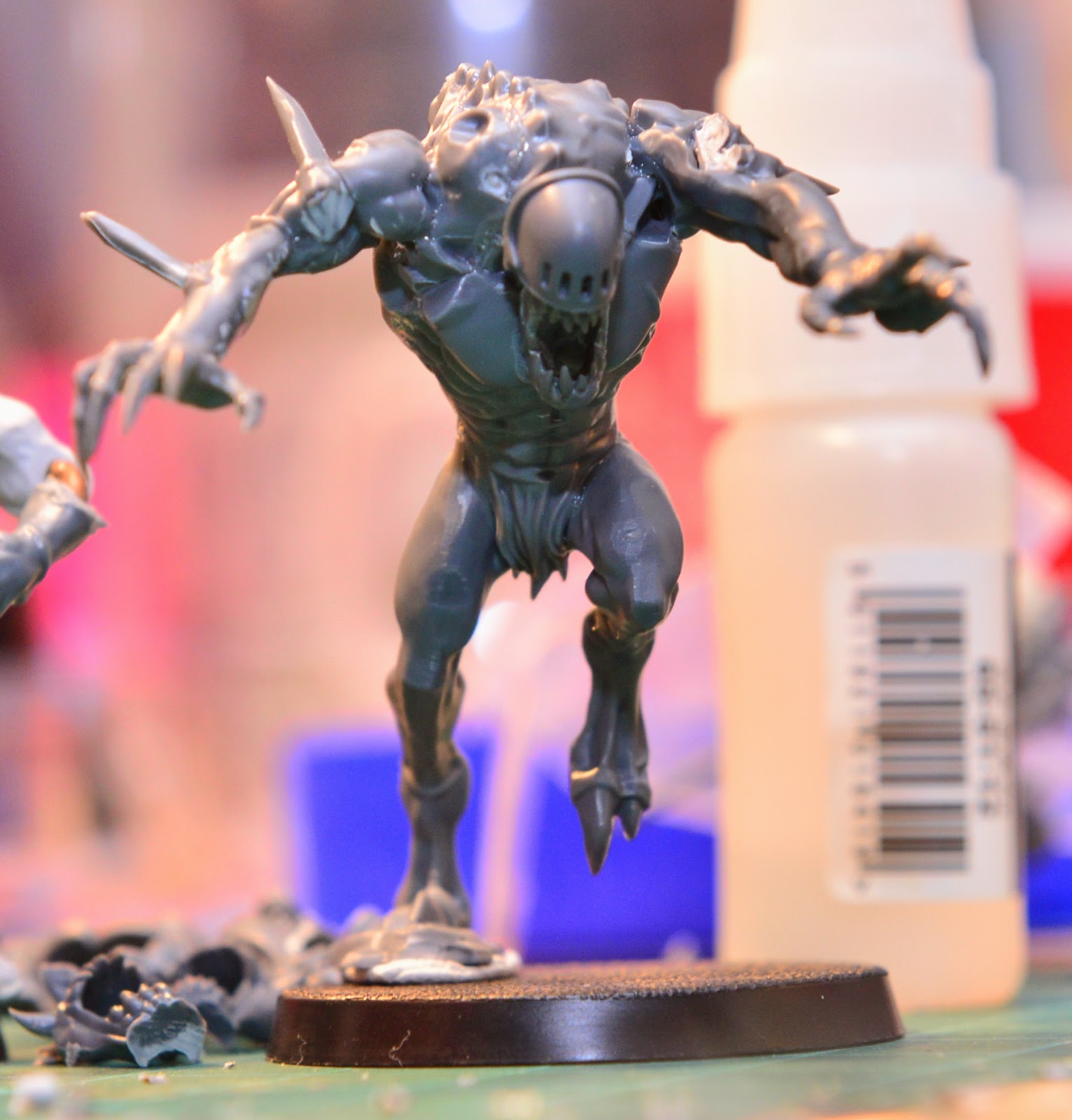 This ones a bit weirder, so bare with. I've decided to rep Sslyth with another kind of Grotesque, but this is based almost purely on the statline and the fact that they Feel No Pain. It's common practice to convert Grotesques from Everblight Warspears. It's a great idea, pioneered by the very talented Eye of Error, but, for me, these Grotesques are too clean, too neatly portioned, too...controlled.

So, too normal for an actual grotesque, but perfect for a cleaned-up version there-of, like—say—one that escorted my coven's Lord of Flesh into battle as part of his retinue >:)

These ones also need a lot more conversion yet, but they will be pretty closely based on Eye of Error's designs: 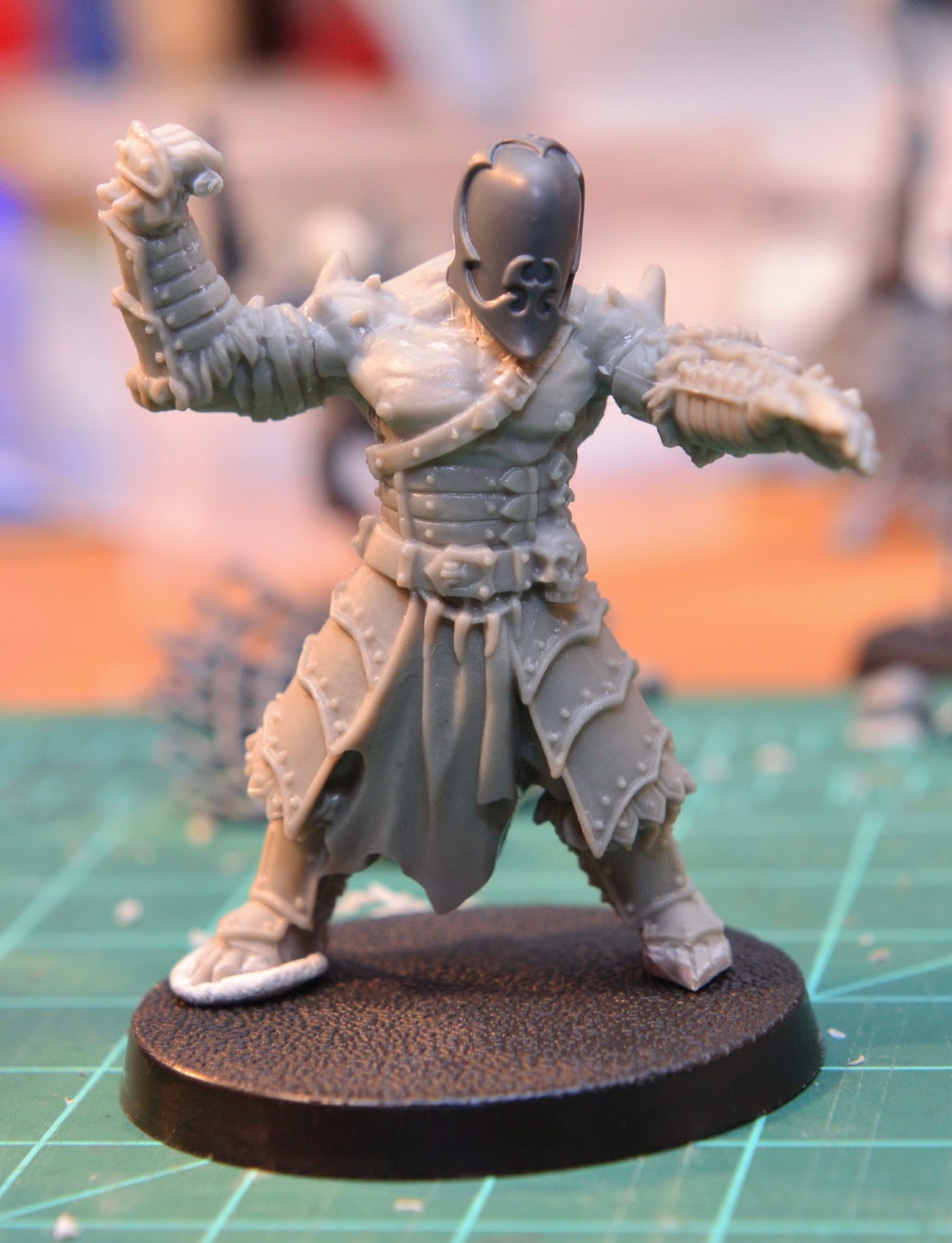 These things have Grotesque conversion potential written all over them. They are very large for a Grotesque, especially when you embiggen them by elongating their waist like I did... 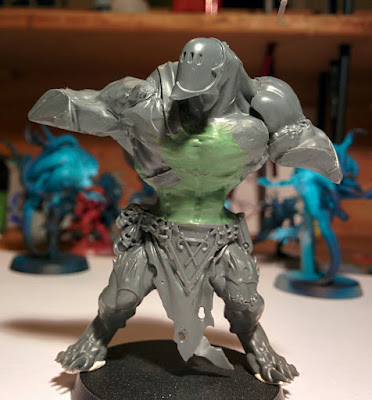 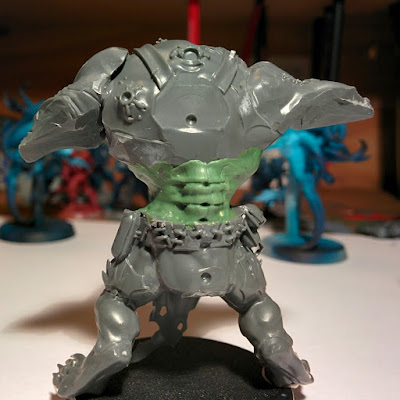 ...but in the end they make a very nice, very BEEFY Grotesque model with just some simple armswaps from the Talos kit. If you don't care about you'd rather make a big, fleshy statement on the tabletop and don't worry about making the hitbox on your models bigger, I would 100% go with these. 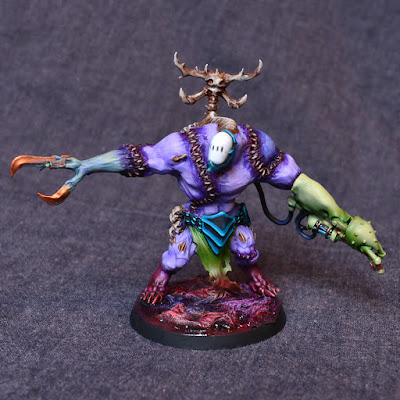 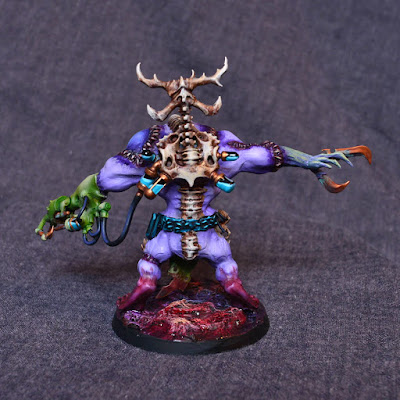 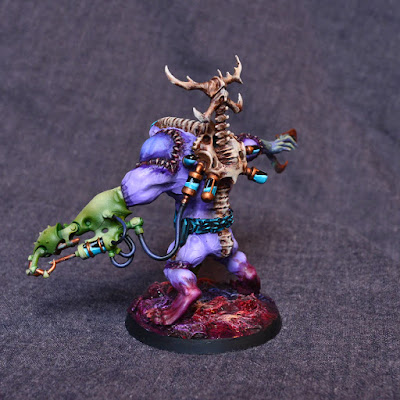 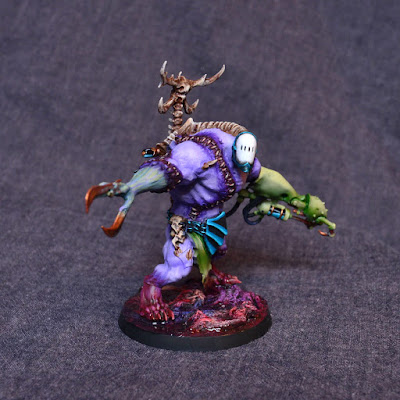 I'll share more on all of these soon, but I've been thinking about these different strata of grotesques for a while, so I'm happy to finally get cracking on my clawed fiend and sslyth grotesque conversions :D

If anyone has other models they're using to convert Grotesques, please share away.
Posted by Mr_Pink at 09:30