Something exciting arrived in the mail on Thursday: 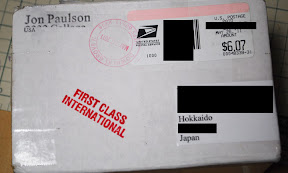 ...apparently shipped at the SPEED OF LIGHT from the 'States as it made it here to Japan in just under a week. It's my first order from Paulson Games, and with service like that, I'm sure to be a repeat customer!
Here are the contents, still all mysteriously and protectively packaged: 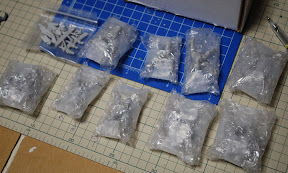 And here's what they yielded: 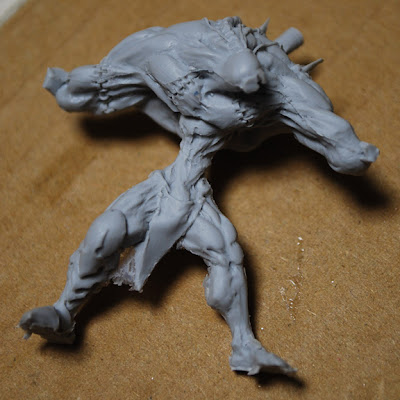 That's right, baby! Time to unleash some Paulson Games' brand Bio Terror on the world. I've thought that this model would make THE PERFECT basis for Dark Eldar Grotesques since the instant I laid eyes on it. As the Finecast release approached, I awaited pictures of the GW Grotesques with equal parts excitement and trepidation: excitement because they're concept art was so fantastic, and trepidation because I really wanted an excuse to mess around with some Bio Terrors, and if GW put out nice Grotesques, I'd have little reason to (aside from price, that is--YIKES!).

Then this was released... 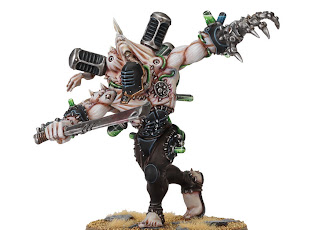 ...and I actually celebrated its static pose and wholly underwhelming weapons sculpts, its strange pleather pants and underwhelming muscular hump/spine area. To me, the model was eponymous: it was just grotesque. Rather than being disappointed, I was ecstatic about now having even more motivation to take my own run at Paulson's superior Bio Terror model. And, thanks to my new Bob's Coven (more details on that later) commission project, I've now got 8 Bioterrors to play with! Excellent.

I've been stalking this model online for a while, and I have yet to see anyone post a worth-while review of it, so, to that end, I got a bit obsessive when taking photos of it to show people how it all looks up close. The following group of pictures are from an uncleaned, straight-out-of-box Bio Terror model. You can see some flash on the model, but there wasn't nearly as much as I've seen on some resin models (in fact, I think I've seen much more on the Citadel Finecost range). 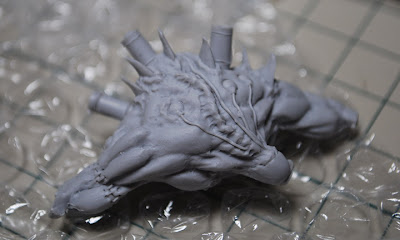 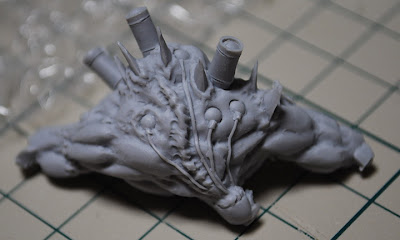 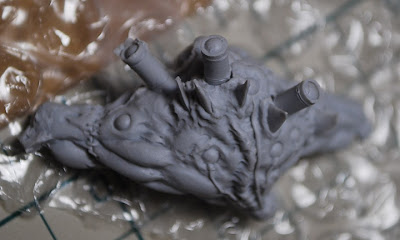 The socket between the leg section and upper body section, as seen from below: 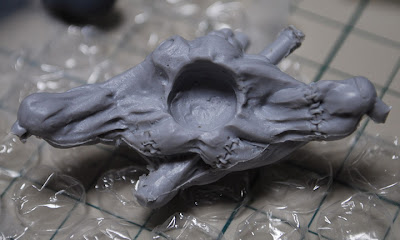 Next up, the creature's legs: 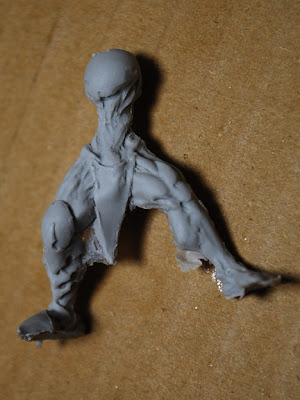 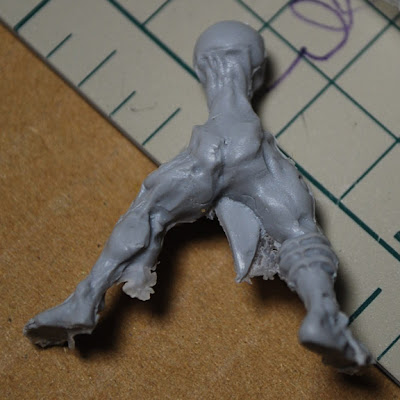 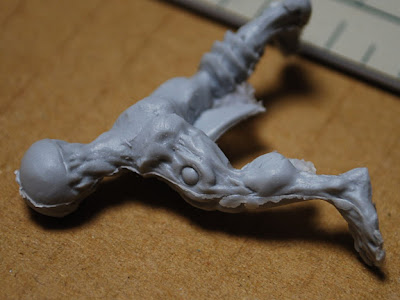 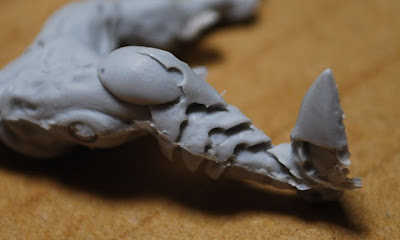 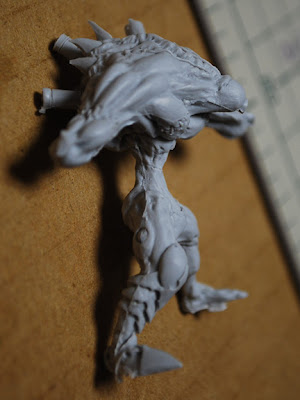 And Bits Shall Not Be Appearing In This Project: 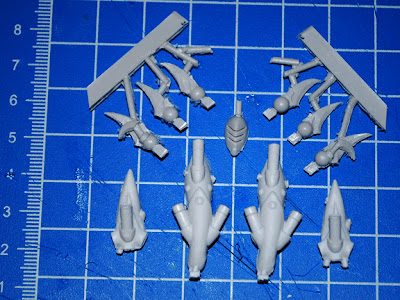 I haven't got any photos of the full model assembled as I'll only be using the legs and torsos for this project (I'll be scratch-building or stealing from the Talos kit for heads and weapons). I only bought one full model for myself, and that's going into the packrat collection, so I won't be assembling the claws/adding the head. Sorry, folks.

Now, I must say that I've very happy with the casts. There are no miscast bits, there are no bubbles that I've noticed, and the flash on the models is minimal (I was able to clean the torso and legs in about 10 minutes tops...which includes time spent ogling the model). I'm not sure how to rate resin, but the resin is light and firm. It's easy to clean with a hobby knife, and I'd describe it as more on the solid side of things than the rubbery side. I haven't tried snapping or bending them yet.

One thing that was apparent, though, is that you won't be able to get away with not washing the models as the mold-release agent left on them meant that not even blu/sticky tac would adhere to them. I gave them a quick bath in warm, dish-soapy water, scrubbed each one with a toothbrush, and they seem fine. 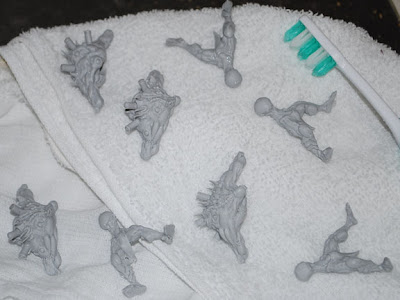 Next up, here are some shots to give an idea of their size. Unfortunately the only Barry I've got on hand is Batty Barry the Gargoyle. The scale behind the models is in centimeters. 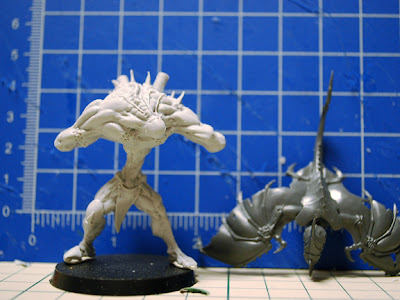 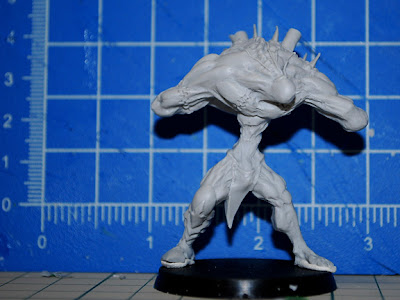 They're big, they're beefy, but they're not extreme or anything. I find them far more distorted and muscle-bound-looking than the GW option, and that really works for me when it comes to creatures that are meant to have been produced by the Haemonculi. People have complained that the claws supplied with the model make it overly large/wide, but as I won't be using them, that won't be a problem. I've also heard complaints that the waist is overly narrow. I can see where those folks are coming from, and I may sculpt in some armour/ichor injectors on either side to bolster it, but I don't think it's THAT narrow, and it helps to accentuate how twisted/muscular this thing is.

That being said, it could use a little more creepy, Haemonculi love, so I gave it the kind of external spine/bone growth that a drugged-up, shambling Frankenstein could be proud of: 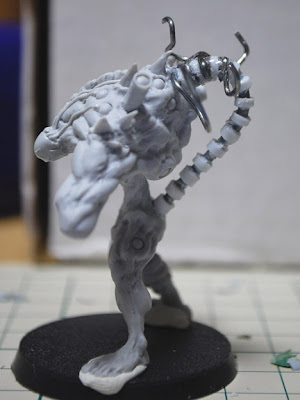 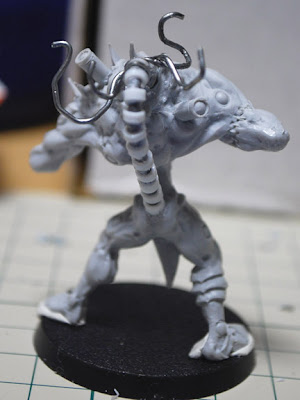 And here's a close-up on the beginnings of the bone rack: 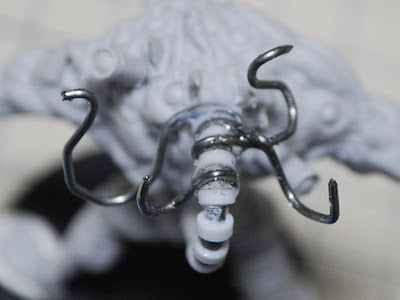 I am really happy with how it turned out. It's made from a wire coat hanger, plasticard tube, and some fine...floral? wire. The only pain was bending the very sturdy coat hanger to shape, and it made me wish I had some copper wire lying around.

While working on the creature, I also started in on some syringes to use as one of its weapons arms (or to transfer over to smaller wracks later). You can kind of see the evolution of them in that shot from the smallest, simpler, to the larger, more complicated models. I look forward to taking a swing at some really over-sized ones for grotesque weapons for to rep Liquifiers. 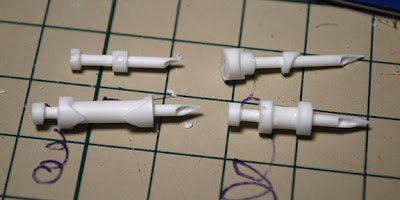 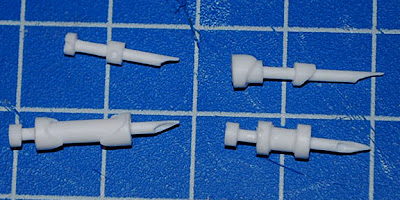 Client Bob has expressed an interest in having the Coven I'm whipping up be surgical-themed, so you can expect to see a number of syringes around. Next up, I need to come up with a decent shape for a Dark-Eldar-y scalpel ;)
Posted by Mr_Pink at 22:29