Love is a drug, but my Lady prefers Polymorphetamines 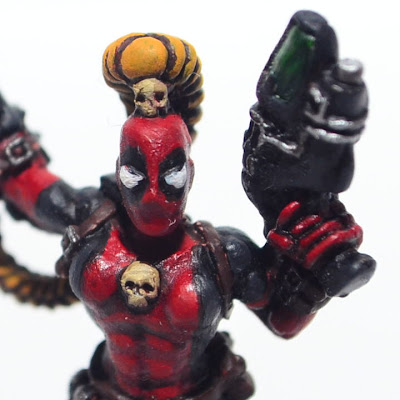 Here's another guest post from the PinkPonny, but you should already know that since it contains a model that has actually been painted ;). On the surface, the following is an article about painting a Callidus Assassin. However, delve a little deeper, and you'll find this is another angle on something that I touched on in my Wisdom of the Norns article about balancing The Hobby with relationships.

Well... Have you heard of Deadpool? He’s a Marvel comic character, he says silly things, sometimes he’s a villan, sometimes he’s an anti-hero? Yeah, that’s all I really know about him. Still I had this Callidus assassin floating around for upwards of ten years. One day I just looked at it and realized this model had the same face as deadpool (and spider-man, for that matter).
I base-coated it scorched brown (my all-time favorite basecoat colour), and with Deadpool as inspiration the model practically painted itself. The first time I painted the Callidus, I painted her body suit with a citadel colour called Tin-Blitz and hit a dead end. I couldn’t think of how to accessorize anything else with this colour. I think I tend to paint most models red because it is a colour with which I can easily accessorize.

I knew that if my Callidus had a Deadpool theme, the ponytail would definitely be yellow. Subsequently I discover Marvel Comics has a Lady Deadpool Character and she in fact has a yellow ponytail. 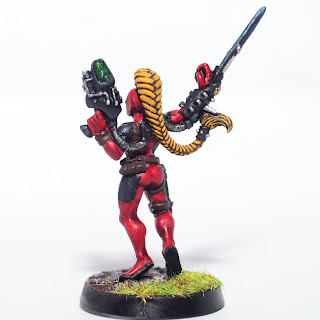 Six months ago my girlfriend was sitting at my work desk. She told me she wanted to make a warhammer model. She picked up a random unprimed model held my cutters to its head and took special delight as I frantically tried to talk her down.

I work with children who cannot communicate verbally and I know every difficult behavior is an attempt to communicate something. GirFriend was telling me if my attention is divided between her and my hobby neither of these thing will thrive. I knew next time it would be Tycho, Dante, or Sanguinator that would lose their head. These things do not matter; I invest the importance in them. I could hand my GF any model and say: ‘paint’ but she would not get the satisfaction I gleam from them. 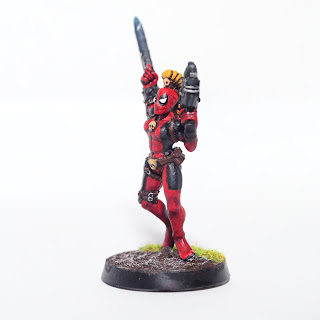 I made a vow. I picked up a Vindicare Assassin I knew I’d never get around to using, glued, primed him and began to paint. I painted that model faster than I’ve painted anything: the lives of my favorite (unpainted) HQ’s were in jeopardy!

Painting for someone else is a liberating exercise. I knew the recipient in this case would never be as scrutinizing as I could be. Any back tracking and trying to fix earlier mistake would cost me time. Time was of the essence, the quicker I could finish, the more I could show my Guardian Force that I prioritized her over my hobby. If I never make any headway with this hobby that I pour so much time into, she has every right to claim it is either her or the hobby.

When painting was finish I based the Vindicare with textured paint (which has now completely dried up), I glued a little static grass down and shipped it off to my Girl Fiend. She loved it! Actually her favorite part was the static grass; but that’s what I love about modeling, one little detail that draws the viewer into the world the figure inhabits. 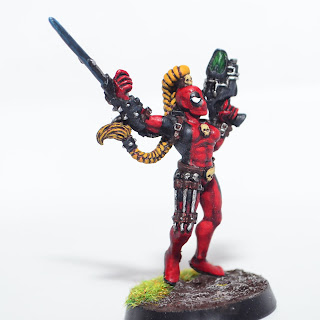 My girlfriend has no interest in Deadpool, she likes two things: big boobs and sexy ladies. Beyond my hobby of modeling my idea around empowering my Grill Friend with two assassins is that in a game of 40k, she is invited to stroll up anytime interrupt any game I am having, infiltrate her two assassins, and become a third side of a two-sided battle.

After boobs and sexy ladies, her next favorite thing in this world would be torturing me. I doubt any opponent would protest the addition of these two powerhouse models to impede my progress and draw my fire Hilarity would ensue from either the damage she could cause, or the rage I would unleash towards the goal of tabling my Griffen’s army of two models. 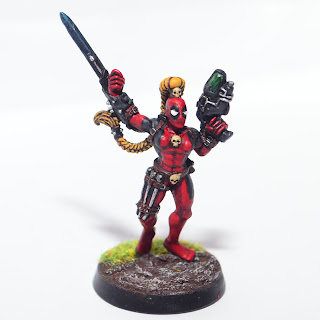 They say if you love someone, set them free. I feel if you love someone give them the keys to your destruction; if they destroy you, it was never meant to be. If you care enough about them to trust them with your kryptonite, the power you give them combined with your love for them should always keep you on the straight and narrow.