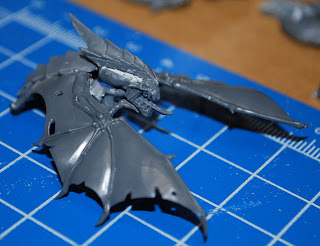 This is my attempt to make cheap 'n easy winged Tyranid warriors. It's an older project that I'm rolling out again to get it finished off. I was inspired to go this route because one of my mad ideas (other than a full Coven army) is to have a full warrior army. To do that justice, I would need me some winged warriors/shrikes, but I want more than wings tacked on a warrior model!

So, on this attempted return to Tyranid Tuesdays, I'll be showing the work I've done so far on converting shrikes out of--mostly--spare bits.


Moloch has always been a huge proponent of flying Tyranids being modeled as more than just Tyranids+wings. Nothing angers him more than hooves on a flying nid (and if you take a look at his winged models, you'll see that his flyers always have feet, rather than hooves). When trying to come up with a concept for Shrikes, I definitely didn't want them to have hooves, like normal warriors. Nor did I want them to have much in the way of feet at all, hoping to pattern them off the gorgeous new Gargoyle plastics.

Since, after getting my hands on the garg models, I became obsessed with the idea of repurposing their torsos as armoured shins, and their tails as lash whips (more on that later), I had a glut of garg wings lying around (how often do you hear that sentence?). This shrike concept was inspired by that glut of wings, as well as a certain extra bit that came with the Trygon. 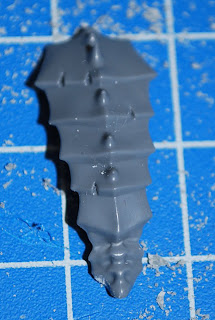 It was probably just luck of the draw with the first set of wings I attempted, but the line of them meshed up with the curve of the Trygon armour bit almost perfectly with minimal cutting required. 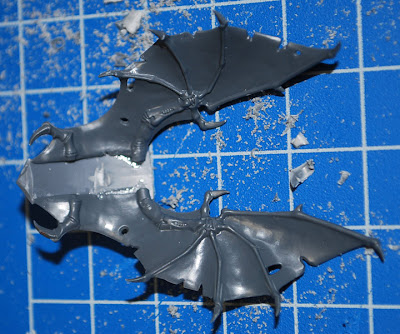 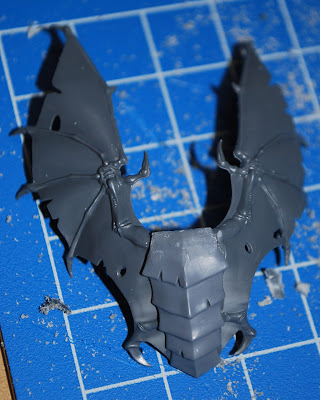 Using gargoyle wings may not seem like a cheap solution since they aren't usually just kicking around once you've finished building another model. However, if you look at a box of Gargoyles as more of a bits box than a set of models, $30whatever dollars for 8 sets of wings (from which you can make 8 flying warriors) isn't such a terrible proposition...particularly when I show you how useful Gargoyle torsos can be for other things ;)

Once I got the wings attached to the Trygon carapace piece, I just needed to attach a ribcage on the front of the model. I chose a Tyranid warrior one, severing it from its carapace (which was saved because it is an awesome bit for armouring up all manner of things later), but you could also use a ravener torso as you get a pile of those in a ravener box. 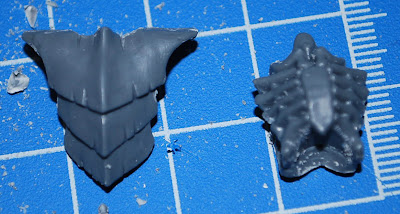 My only concern with the ravener bit is that it's fairly barrel-chested in comparison to the Warrior torso, so it may further strain the idea that normal garg wings could hold it aloft.

For the creature's tail, I elected to use a garg torso/tail. I know I said that the Garg torso/tails were meant to be used for armoured shins/lash whips, but I fell so very in love with them as conversion bits that for a while I was buying them up from online bits suppliers. Here's the cutting work I did on the torso/tail. 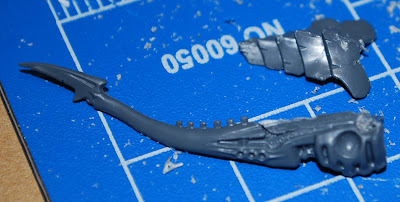 As we're building this shrike on Gargoyle wings, it is important to cut things down as often as possible: both to make the model look streamlined and aerodynamic, as well as simply to make it look smaller and less ridiculous flying around on the somewhat diminutive garg wings. One place I did this was the warrior's head, though I still wanted to leave a bit of crest to harken to both the gargs and the creature's synapse roll: I tried attaching the Garg torso/tail directly to my warrior torso construction, but it seemed like something was missing. 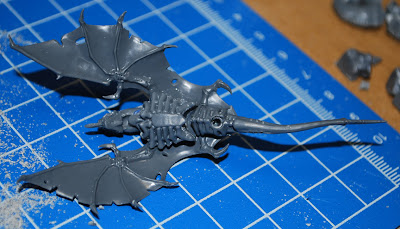 Therefore, I went back in and sculpted in a bit of extra waist-like stuff to link them up. 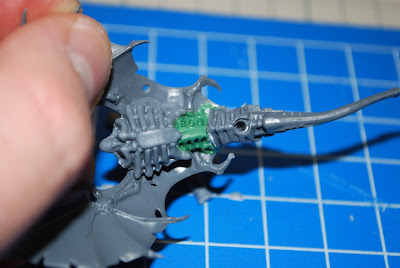 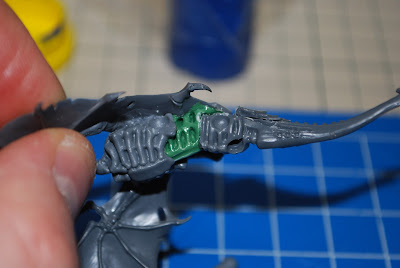 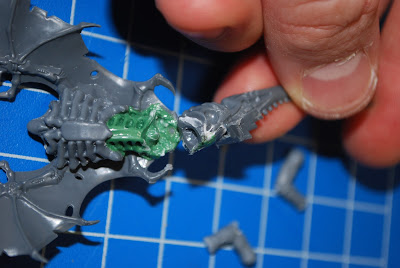 Here's a shot of the beast all together at this stage. 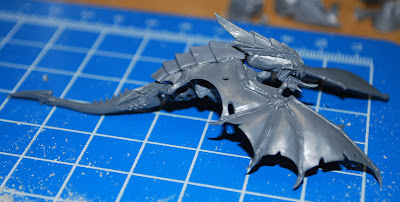 You can see that it is getting a little large for its Gargoyle-wing-britches, but PinkPonny tells me it still looks okay/passable. I'm not sure why I didn't get a shot of it with a proper gargoyle barry, but I will do so.

Next up, I'll be adding an under-slung devourer and some vestigial legs in the back to represent rending claws. I've tried a couple of configurations for these claws, and they always seem to wind up looking awkward, so we'll have to see how it goes :/

Due to the size concerns, it may not be the ideal solution for Shrikes, but I'd say it is at least WYSIWYG passable, and the design links the Shrikes to any Gargoyles in the force aesthetically.
Posted by Mr_Pink at 10:00