In honour of 40k's 25th Birthday this year, I'm working at an ongoing series called "The Tyranid Archive," which is meant to be a historical look back on where Tyranids came from and how far they've come. Here's our last installment, for now, tracking the chronology of the main Tyranid model line's evolution. However, there are some gaping holes in this chronology that I'm trying to get some help to fill (Space Hulk? Genestealer Cults?), so those may be cropping up soon. 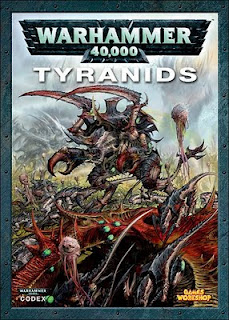 (Also known as The Age of The Trygon, Great! New Units!...Now Where Are The Models?, and Oh You'll Get Your Second Wave...Someday)
With this article, we're brought up to the current generation of Tyranid models and rules. As it's the one that current Tyranid players are most familiar with, I won't spend much time talking about the rules. However, some notable changes from 4th Generation/Edition for those of you who only started Nids recently were things like the strength and number of shots of ranged weapons going back to being an absolute value, rather than based on the strength/attacks of the creature carrying them. Our Niddy guns hadn't been like this since second edition, and though it makes things a little easier, I far preferred when the creature influenced the strength/attacks. It made for comedic possibilities like Carnifexes totting Str 9 or 10 Fleshborers. Then again, the new system makes things like devourers a little more useful on gaunts


Just like with my 4th Generation write-up last week, I'll be skipping over the tried-and-true models that remained in service from the old codex refresh through to the new one. However, If you're keeping score: Plastic Gaunts, Hormagaunts, Rippers, Warriors, Genestealers and Carnifex; Metal Hive Tyrant, Lictor, Tyrant Guard, Broodlord, Biovore, Spore Mines, and Zoanthrope.
With all those ranked up, you'd wonder what model slots were left to fill in the Tyranid range. Well, that'd be a good question because there weren't any. We had models for every unit in the 4th Generation Tyranid Codex. So how was Games Workshop going to justify a new Tyranid Codex? How were they going to sell new models if people already had access to the whole of the range?

Easy: by inventing a whole slew of new Tyranid units that needed new Tyranid models >:)
Well. That's a bit mean spirited. The Tyranid refresh that accompanied the 5th Generation codex brought some welcome plastification of models that had, until now, only been available in pewter, like the Raveners, and--to the immense relief of all the long-suffering Tyranid modelers: GARGOYLES! 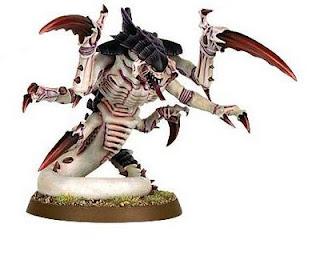 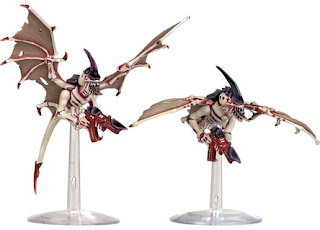 PLASTIC GARGOYLES. SWEET JAYZUS, PLASTIC GARGOYLES. PRAISE BE!
Man, were those plastic gargoyles ever a long time coming. The metal gargoyles that Nid players had been trying to make work for two generations were so fiddly and disaster prone that they resulted in the effective disappearance of Gargoyles from the game board for two generations (with the only people fielding them being the ones who had converted their own from plastic gaunt models).
Oh, yeah. And there was that other model that was release in plastic, having only previously been available in resin: The Trygon! 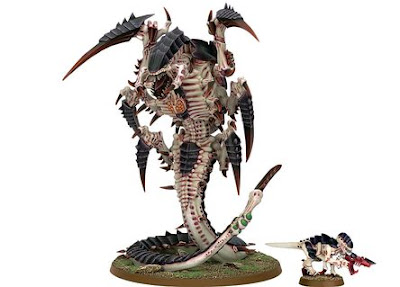 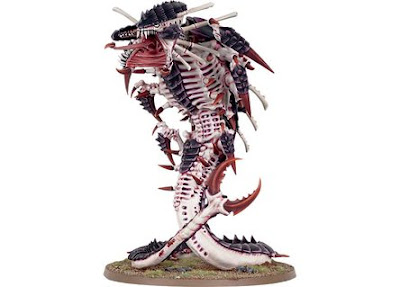 PLASTIC TYRANID MOLOCH. CRAP! I MEAN RED TERROR--NO, THAT'S NOT RIGHT!
Between the plastic Gargs and the plastic Trygon/Moloch--oh, sorry--MAWloc kit, Tyranid players were wetting themselves with unfettered plastic modeling power. Just as last generation's plastic carnifex had set off a kitbashing bomb, this generation's plastic Trygon was a similarly hot commodity for conversions: most of them to represent the absent Tervigon (but more on that later). The Trygon/Mawloc was also the first multi-use Tyranid kit, which inspired a whole fleet of converters to bust out their rare earth magnets to make one Trygon kit serve tripple duty as a Trygon, Mawloc, and Trygon Prime.
It was the biggest plastic kit in the Tyranid line, and there were rumours of its existence going back to the release of Warhammer 40K Apocalypse in 2007, stating that it was meant to release alongside the Baneblade and Stompa. Heck, I had even stumbled across some of the bits for the model on a visit to Nottingham in June of 2007. When the model released with the codex in early 2010, some enterprising sleuths at Warpshadow went combing over shots from the Apocalypse book and Phil Kelley's army on the GW site, and--using the small diferences between the plastic and resin Forgeworld models--they determined that the Trygon had been hiding in plain sight in the Apocalypse book for all these years. 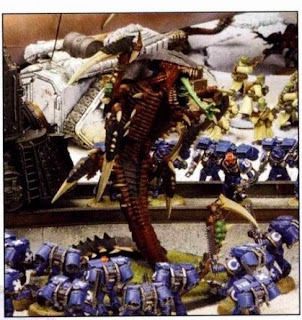 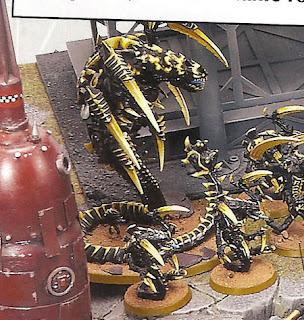 WHAT A TEASE! THESE PHOTOS SHOW SOME COMPONENTS THAT WERE CONSIDERED FOR THE PLASTIC TRYGON, THEN DROPPED.
The Trygon was the first of the new Tyranid creatures to be included in the 5th Generation codex, and there were many more where that came from. All told, the 5th Generation included 19 more entries than the 4th Generation one had, and when the dust settled on the initial 5th Generation model releases, only 7 of those new entries actually had models: 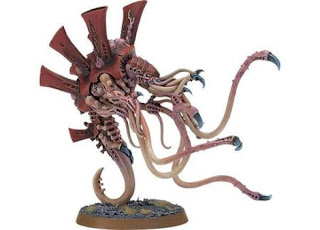 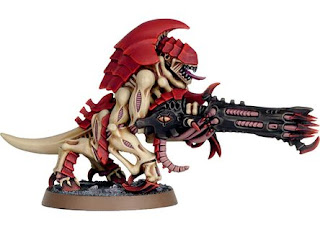 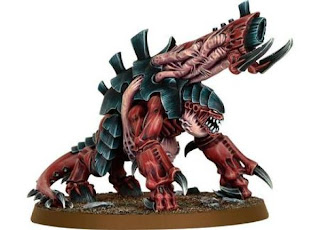 METAL PYROVORE. LIKE A BIOVORE, EXCEPT SHORT RANGED
AND WITH NO COMBAT ABILITY... :( 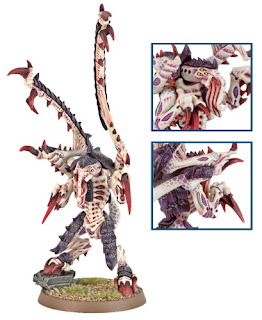 For some, it was an epic opportunity to convert up a whole pile of new Tyranid strains that had only the vaguest of concept art and description. It was carte blanche to hack up existing Tyranid kits and create something original, then have rules to use the thing. For mad people like me, it was a fantastic modeling challenge, and it was issued as a challenge on Warpshadow for a number of modeling challenges. I pontificated on how this was a great opportunity to come up with something more than a simple 'Fex conversion, and I even took up the challenge myself.

However, for others it was an annoyance: there were all of these great new entries for units with interesting rules (most interesting among them, likely, the Tervigon), and if you wanted to field them, you needed to convert them yourself. Except, there were only the loosest of descriptions for the models, so Tyranid players were faced with the question of how best to legally represent these creatures.

And then there were these rumours that Games Workshop had a Tervigon/Tyrannofex model completed, but they were, reputedly, sitting on it, waiting for a time to release a second wave of Tyranid models. There were rumours that the wave was held up over litigation with a third-party modeling company. 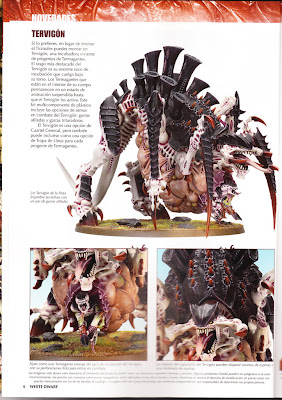 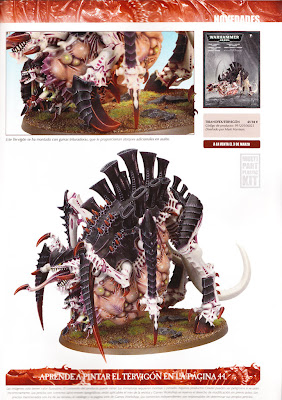 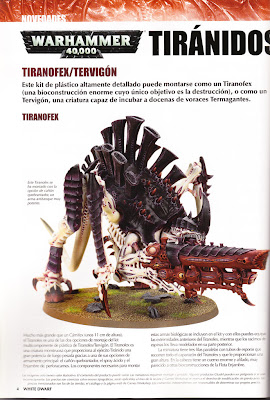 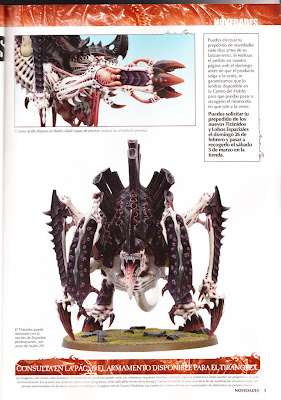 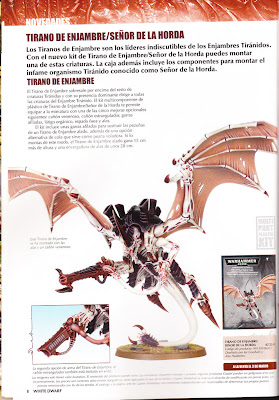 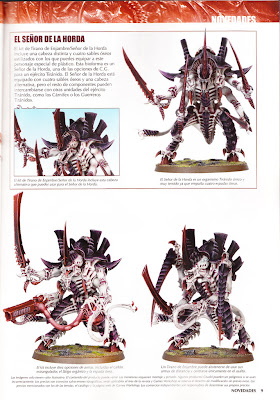 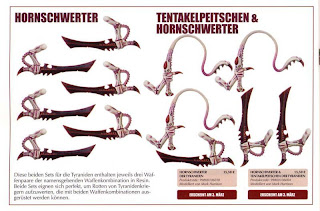 FINECAST BONESWORDS AND LASH WHIPS.
TOO BAD ABOUT THE PRICE AND THE LACK OF DETAIL.
There were, of course, a whole pile of Finecost recasts of the metal Tyranid models, but we need not talk about those as they were pricey, and, often, miscast.

Though we were all elated to see this second wave when it dropped at the beginning of March, in case you are keeping score, it only actually provided models to fill three of the empty slots in the Tyranid model line (I hadn't counted Winged Tyrant or Bonesword/Lash Whip options in my initial tally). That means that, with all of the variety provided by the most recent codex,  there are still 9 entires in the Tyranid codex that are awaiting models (19 –7 new models in the first wave –3 new models in the second wave = 9 entries missing models). Some of those are easily converted away (Alpha Warrior/Tyranid Prime, Harpy now that we've got a plastic Winged Tyrant, Shrikes, Winged Rippers), but you'd wonder why GW still hasn't come around to making a Mycetic Spore model when it is an option open to most entries in the codex, AND it is such a very popular model to field. There have been whispers of a Finecast Doom or Ymgarl 'Stealer, but those rumours have yet to materialize into actual models.
Still, at the end of the day, Tyranid players haven't got much to complain about. We have an amazing range of plastic kits, with two of them now being classifiable as Apocalypse-sized, and you can, pretty much, field an entire army from that plastic line with a little conversion/invention. What's more, the fact that we still have 9 entries outstanding in our codex makes it a converter's dream as they are the perfect opportunities to put your own spin on the Tyranid line/provide unique centrepieces for your fleet.

To give the impression that this generation made the Tyranid line into one big, happy family, here's a great scan from a Spanish White Dwarf, showing all the Tyranid models released to date: 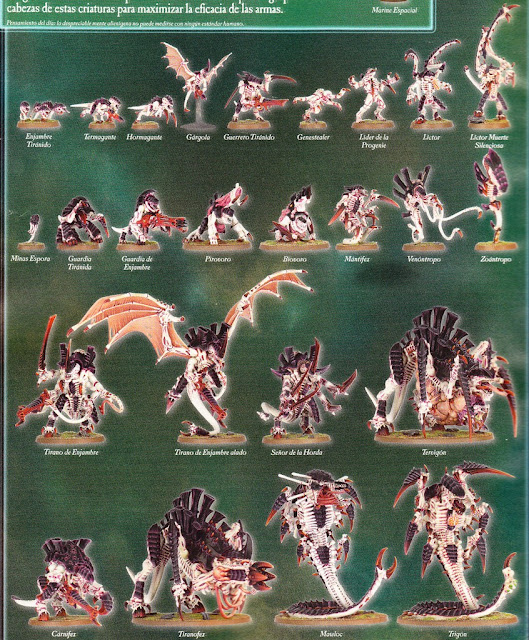 Not too shabby for a line of models when you rank them all up, eh?
Posted by Mr_Pink at 06:00