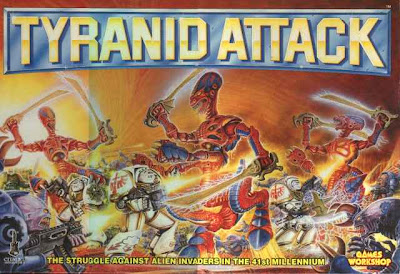 With a little helpful suggestion from a Warpshadow member, I came up with the idea of cataloguing the genesis of the Tyranid model range since its introduction way back in the fuzzy mists of Games Workshop history. It's something I've always been kind of obsessed with: keeping track of older models and making sure that newer modellers knew where their beloved bugs originated. What's more, this is the year 40K turns 25, so what better time to look back on our beginnings?

Thus, this will be the beginning of The Tyranid Archive, a historical look back on where Tyranids came from and how far they've come.

That being said, before I get into anything, I need to plug Stuff of Legends as, without their help, some older parts of the GW lines wouldn't have any kind of home on the internet. If you've ever thought "hey, whatever happened to that old, pewter (or, in ancient cases, lead?) model I can barely remember," Stuff of Legends is, likely, a great place to look it up:
There is also the Collecting Citadel Miniatures Wiki:
I'm not really sure how to proceed with this, so I'll divide up the models in by generation, including dates and additional anecdotes where I can. That being said, I've only been keeping pace with the Nids since 2nd Edition/their first codex, so most of this post will be based on only what I've heard/read about after the fact. If you're reading this, and you've got interesting stuff to contribute or if I've gotten something terribly wrong, please tell me in the comments below.
1st Generation
(Also known as Advanced Space Crusade, Rogue Trader, and TyraWHATnow?)
When Tyranids first burst onto the scene, they were little more than a cool story element in the fledgling Rogue Trader universe. As can be seen from the earliest of Tyranid models, their design concept was rather loose, tending more toward dinosaurs or daemons rather than sentient space horrors: 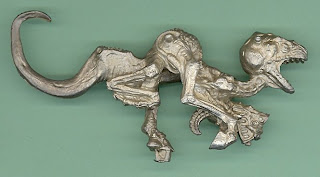 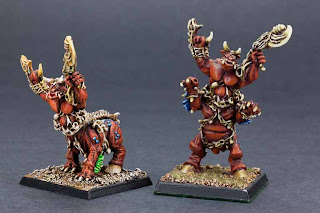 DOMINATOR
The dominators, it would seem were eventually massaged into a more cohesive concept in the form of the Zoats, a race of centaur-like, Tyranid creatures that roved ahead of the swarm and...negotiated...(!?) with the other races of the galaxy. 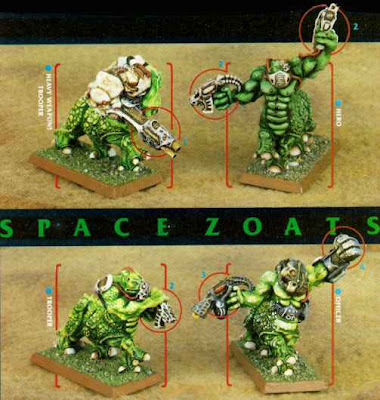 ZOATS
However, when you've got a Hive Fleet full of gribbly space aliens, intent on devouring any and all biomatter in their path, negotiations make little sense, so though they were neat models, the Zoats were eventually phased out of the Tyranid line.

Still, some of our most recognizable, persistent strains of Tyranids had their humble beginnings way back in the days of Rogue Trader/First Edition of Warhammer 40,000. Creatures and concepts that started out seperately as the freakish Tyranid Grabber Slasher and the muppet-looking Tyranid Swarm would eventually be streamlined into a single unit that we now refer to as a Ripper Swarm. Then again, now that I think on it, I'm not sure if the Grabber-slasher was a proto-ripper or a proto-lictor as its fluff had it crawling through rafters and dropping down to assassinate its prey. 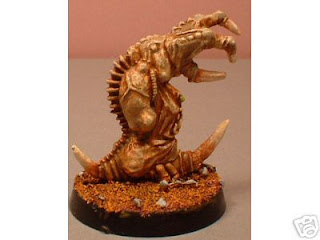 TYRANID SWARM
There were, of course, Tyranid Warriors to lead the broods. They were cast in metal and were the first Tyranid units to carry boneswords. 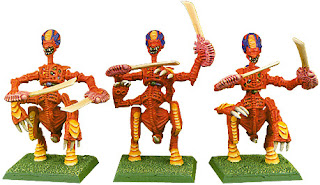 METAL TYRANID WARRIORS
Following along in their thrall were the realization of the Proto-Tyranid concept, the fore-runers to gaunts that then went by the name of Hunter-Slayers.

HUNTER-SLAYERS
And, rounding out the hivefleets' ancient beginnings were a strain of Tyranids born in the shadowy, cramped confines of vast, abandone space craft. They were the only things that could really strike fear into the heavily-armoured Space Marine Terminators. They were, of course, the Genestealers, and these metal models with plastic arms are still, I think, the prettiest Genestealers that Games Workshop has ever released:

GENESTEALERS
Now, there is one more model that I believe to have been created and released late in first edition (based solely on the fact that it originally had a two-part, hyphenated name and I've seen photos of it painted with the odd head markings that Rogue Trader Tyranids featured), but I could well have been released during the early days of second edition. I'm pretty sure it's the model that got me interested in Tyranids (and, by extension, 40k) in the first place when I pulled it out of a friend's gaming case, and even with all the leaps and bounds of computer-aided, injection-molded, plastic sexiness of current miniatures, this old, metal model may still be my favourtie. It was sculpted by a young up-and-comer at GW who went by the name of Jes Goodwin and was destined to aesthetically define broad swathes of the universe we all know and love. What I'm dancing around is, of course, the Screamer Killer. 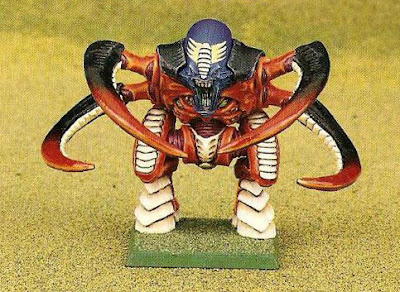 SCREAMER-KILLER
And back then that was as big as the Tyranids came: a sickle-bladed, bio-dreadnaught (I think someone told me the Screamer-Killer had armour values, but maybe I'm making that up...). There were no Tyrants or walking artillery batteries or bloated-headed, psychic lascannons. Fortunately, the Nids were in for a refresh, and what a refresh it was destined to be!