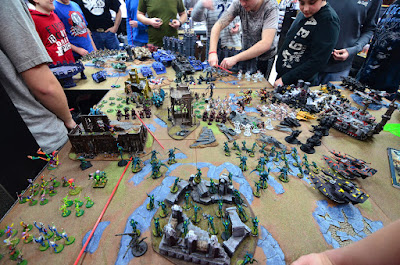 This past Saturday February 25th was Warhammer 40,000's 25th Birthday. To mark the event, Games Workshop released a very expensive anniversary model and some miscellaneous swag. They also host 40k-themed events in all of their hobby centres. As I haven't spent a meaningful amount of time in a Games Workshop store in years, and I generally focus more on converting, kitbashing, and sculpting than on painting and playing, I had written off these 25th anniversary events pretty much right out of the gate.

However, I'm blessed with a friend who is still into the gaming side of things (even if only sporadically), and an other half who is bafflingly interested in anything I sink my time into, regardless of how dorky it may be. So, between the two of them, they convinced me to take a chance on the 25th Anniversary events at a Games Workshop out in Ajax, Ontario, and I was left trying to figure out if I had a legal, painted, 1000pt list of Tyranids at midnight the night before to enter into the Apocalypse battle the next day!


Here are some shots of how the battle panned out, as taken from the "Ork/Badguy" lines of which I was a part. 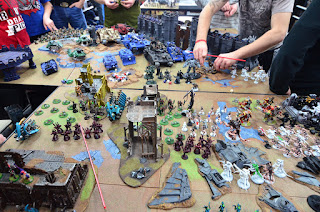 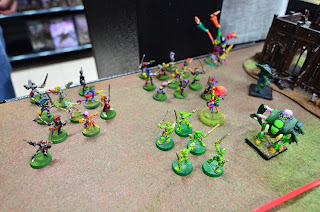 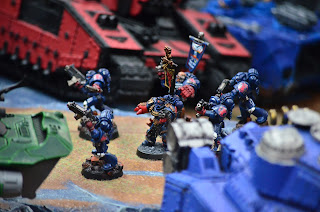 The beefed up (6 wounds, eternal warrior) Pedro Kantor, hoofing it for the objective 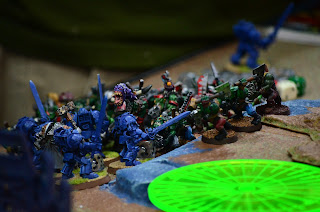 Some of the only Orks in evidence, getting kicked in the teeth by Ghost Knights. 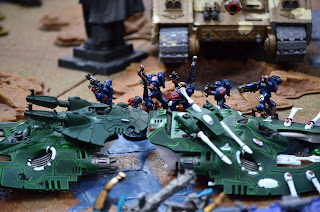 Cowardly marines advancing behind a literal wall of armour 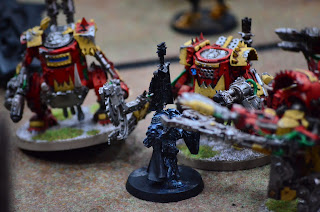 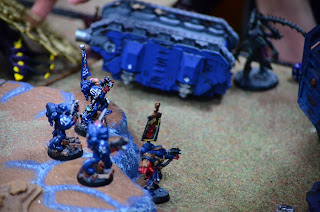 Kantor, within striking distance of the objective 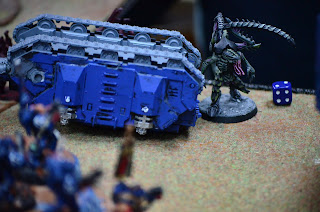 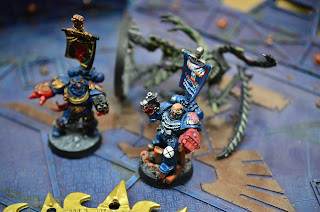 The lucky marines that survived far more fire and combat attacks than should be possible, giving each other Power Fist High Fives over the smoking remains of the Hydra Lictor. Bad Guys lose >:( . 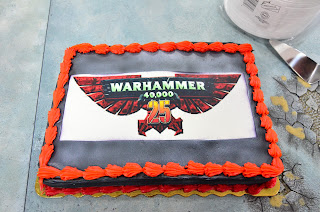 And then there was cake.
So, as proof that these was a time when I did, actually, paint some models and play some games, here are the Tyranids of Hive Fleet Fenrir: 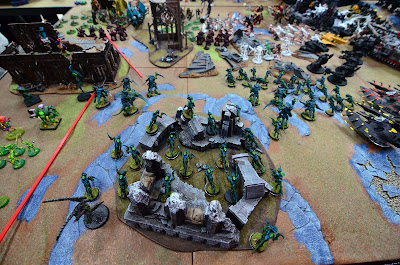 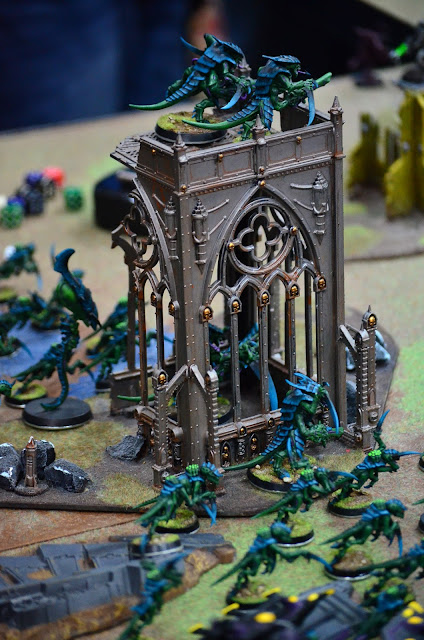 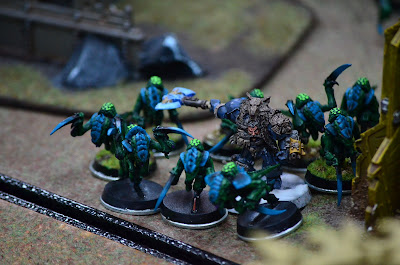 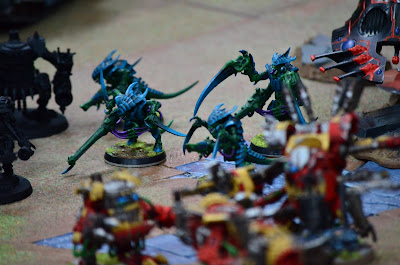 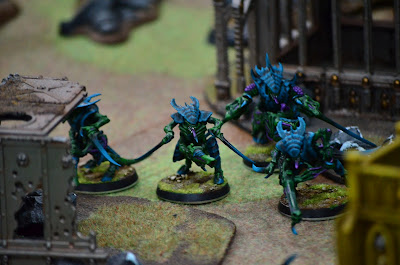 ...and as proof of my interest in Tyranid history, here are my 2nd Ed Carnifex and 2nd Ed Zoanthrope holding down the Nostalgia Quarter with my buddy's cavorting (metal) Harlequin Wraithlord (Dreadnaught): 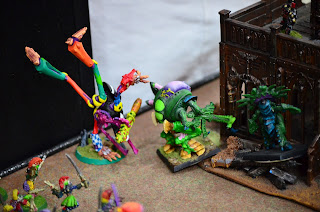 There was also a painting competition, so I entered one of the best models I've ever painted: Hel. 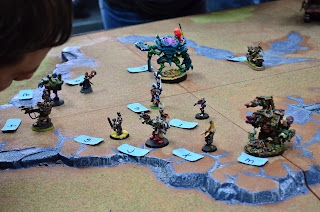 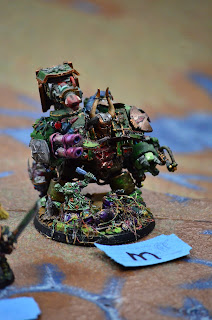 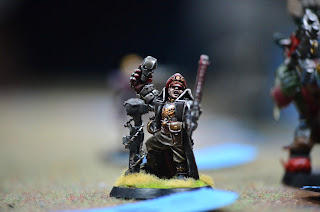 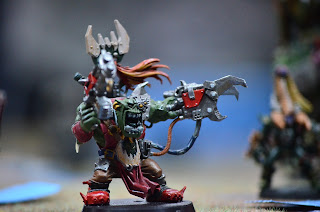 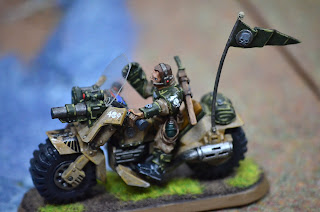 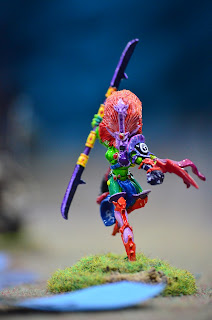 Fortunately, most of the models were of a tabletop to high-tabletop standard. Also, I was fortunate that the following model was bumped up into the Masterclass painting category so I didn't have to face off against him :/ 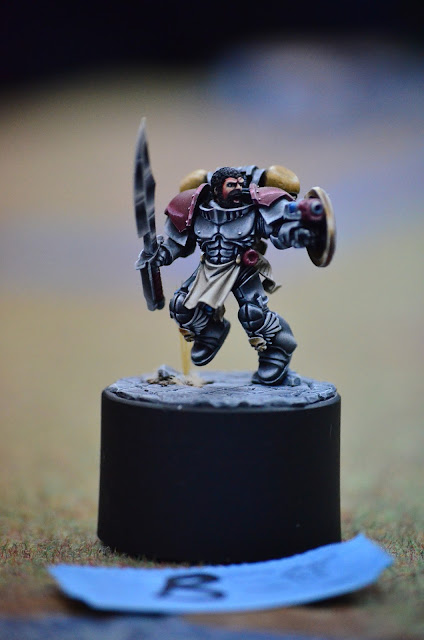 More info on that here.

In the end, Hel won the day, which was nice as she'd never garnered any more than First Cut recognition in the various Golden Demons where I'd entered her. 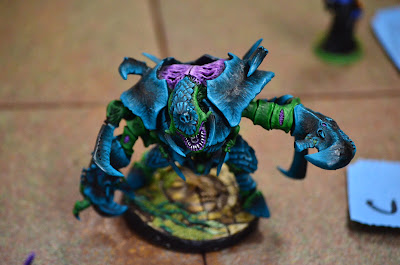 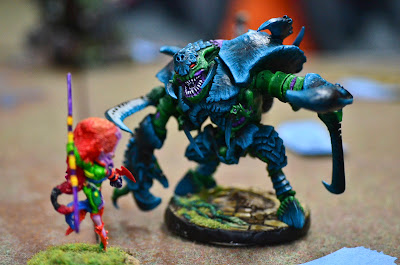 The prize? No more than a 40K25 anniversary pin (my second of the day after I was awarded one for volunteering to help run the Apocalypse game...me who had never before played a game in 5th Edition!) and some recognition, but that's alright. 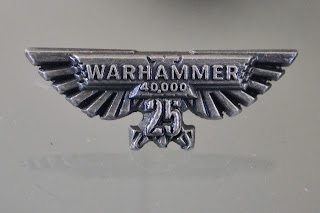 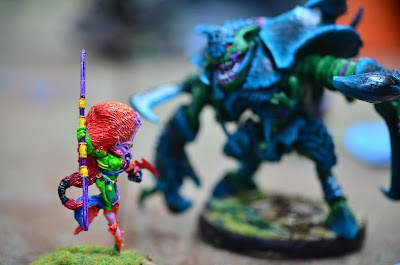 All in all, I was really glad I attended the event. The running of it was a little helter-skelter, but that is mostly because all of the different events were being run by the one store manager, Jordan, while he was still trying to check people out at the cash and answer questions for any other events going on at the same time. He was a fantastic guy who I was happy to meet: the kind of Games Workshop Hobby Centre employee who is more interested in the hobby than the models; more interested in enabling kids to be better painters than he is in getting them to buy more models. And that's genius, really, because what better way to sell more models than by trying to assure that new gamers have a good relationship with the game.

Long story short, I'd recommend the guy a hundred times, and if you're anywhere near Ajax's Durham Centre, you should swing by the Games Workshop there and meet Jordan...just not on a Monday or Tuesday because the guys is running the store alone and he needs some time off!

Saturday also made me feel fortunate to have a buddy who still wants to play the game and to have a Lady who is genuinely interested in anything in which I am interested. Apparently the only justification she needs is the fact that I think it's cool.

Finally, I think the most lasting part of the experience, for me, was a re-invigorated interest in parts of the hobby that had completely lapsed for me: namely, the painting and the playing. Actually seeing my models on the board and getting compliments on what I always thought was an only-sort-of-alright paint scheme made me think that maybe I should get back to making some bugs for my fleet now and again, and maybe it wouldn't be so bad if I got back to painting. Granted, I'm not sure where to find time for that sort of thing these days, when I should be focusing my modeling time on projects that will actually generate some kind of return.

However, it is still the case that I dug out two old Screamer Killer models yesterday, and while we were all watching the Oscars, I set to work cleaning and starting in on pinning them with the end goal of making their poses slightly more dynamic in the hope of bolstering my own fleet with them.

Here's hoping they're something I can share here soon!
Posted by Mr_Pink at 12:06