Brother P. and some of my models have actually gotten painted! I'm a couple weeks late with an update, though. After finishing the Daemonette, I started work on a techmarine, I made from a Deathwatch: Kill Team model, as well as a Diabolist, I made from a Betrayal at Calth Chaplain. 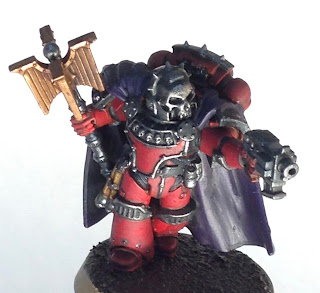 I've heard painting red is a pain for many people, but I really find it relaxing. I prime with Vallejo German Red Brown. It's my base colour anytime I need to paint red, bone white, or gold. Step 2 is to 'block in' panels or the armour with Mephiston Red leaving a gap between each panel where the red-brown can show through. Red paint doesn't give a lot of coverage, sometimes this means that you need to go over a model a second time and 'block in' the parts you just 'blocked in'. This factor can be a blessing, because when you slip-up, often the mistake can be easily corrected. I use agrax earthshade to correct any mistakes. Easy mode would be painting the whole model red, then completely agraxing it up, but it feels so un-civilized to me.


I am in the midst of getting into Airbrushing, but I'm still tracking down the last element I need (Red Cyclone Spray Booth). It'll be hard to break from my brush painting ways, but seeing how quickly, my brother, Mr. Pink works through his backlog using an airbrush, I am motivated to get started. 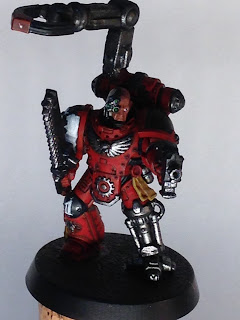 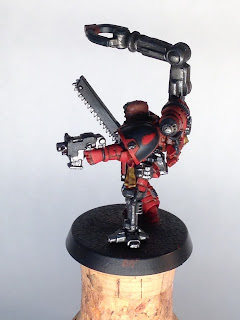 The Servo arm on my Techmarine is actually from a really cool Japanese model kit called Mechatro Wego. Each kit comes with two robots, so, after assembling the first one I decided to scavenge the second for parts. The Servo arm back back is actually magnetized, because in the Blood Angels codex, Techmarines can take a Jump Pack for free (by dropping the servo arm) and this makes them the cheapest Jump Pack HQ (50 points!) If GW ever changes this, I going to make a Karma Sutra themed Slaanesh army (using only GW minis, of course) and attend every single warhammer world event; that's Age of Sigmar, 40k, 30k... even the Hobbit!

Right now, about 50% of my marines have magnetized back pack (to facilitate Jump Pack options) and it really makes painting the model much easier. I've discovered there's a slight danger that people will pick up a metal model by its magnetized backpack... 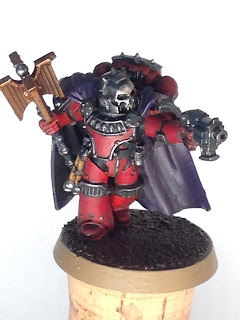 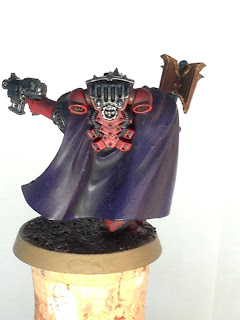 The second model is a Diabolist is for a Word Bearers army that's been brewing in the back of my mind. I use the same scheme as my blood angels, then just wash the model with Nuln Oil. I don't like the idea of washing an entire model, but it is hard to argue with the results. The head of the Diabolist comes from the recent Death Company Chaplain released by GW. It's a great head, but the teeth on it feel a little too demonic for Blood Angels, but it worked perfectly for Word Bearers. I attempted to give it green eyes lenses, but there simply wasn't any detail to paint within the eye socket... so that was a mistake, and I went with just filling the sockets in with black. 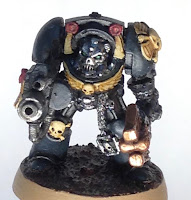 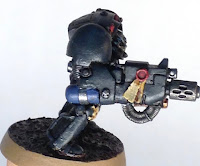 The third model I completed was this old Chaplain in terminator armour. I love the skull helm it has. I may have stolen this guy out of Mr. Pink's bits box... but it's the price he pays each time he claims "I'm getting out of the hobby".  I converted a rather weird looking combi-melta from an old terminator assault cannot, and plastic multi-melta off a landspeeder. The model is a little shorter than current models, but it's good to have a few nods to the past. All the old models are on 28mm bases, so for this chaplain I dropped his 28mm base into an 32mm adapter base. I recently bought a couple "Base adaptors" by a company called Wargamma.  Wargamma prices were good plus they sent me more than the ten bases I paid for, but shipping was a little slow.

Now almost all my models get a iron coin stuck under the base. The added weight keeps them from falling over so much, and while I'm painting the model I can pop them on and off the model holders I made by jamming a magnet into a cork. I have so many models on 28mm bases. A lot of them I'd prefer having on 32's. Specifically the Space Marines. I could glue these Adaptor on all my models, but I came up with a different idea. I want to re-cast Wargamma's bases in different coloured resins (this is technically stealing). Before the resin cures, I'll drop a rare-earth magnet into the resin. Once the resin hardens I'll have a coloured adaptor that will attach to any model. Having these bases cast in various colours means that it will help me differentiate squads. "See those guys with clear red bases, they're all one squad. See that guy with the neon pink base, he's a flamer".

I've completed 3 models, but none of them have received edge highlights. I know, especially as a 'brush painter' I've got to do my line highlights, but I'm calling it quits on these guys (for now) simply because I've got to post SOMETHING.

Anyways, I've basically lost this challenge with my brother, partly because of a (related) side project I should complete, and reveal within a week. I've told myself that by doing so poorly at the start of this challenge, I can trick mr. Pink to slowing his pace... but he's kicked my ass. The side project might score me some brownie points, but at this point Mr. Pink has a commanding lead on me. I just hope that when he wins, he doesn't order me to start (and finish) an Eldar army (within one year). I'm pretty sure that he'd order me to finish painting the Kroot Hunter he gave me several years ago, so I'm planning to complete that model next.
Posted by Unknown at 20:40