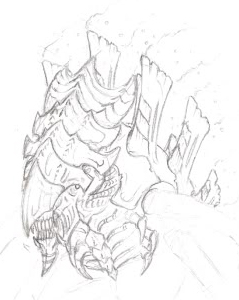 Callum MacDougall's (Iron Nid) concept for a Swarmlord. Sure, it's just a head, but I think it does a great job of marrying the current Tyrant design with the Aliens-rip-off-Queen head of the 3rd Edition Tyrant model.

I think that the aspect I love most about the Tyranid community that has sprung up around Warpshadow.com over the years is the artistic bent of the majority of our members. Sure, there are Tyranid tactical geniuses around, but I focus the majority of my attention on the Modeling and Painting section of the forums. That focus has meant that I've stumbled across some pretty awesome, innovative Tyranid designs over the years. And, now that we've got the "big guns" like Goodwin and Cirillo and Vermis out of the way, I figured it was about time for the Concept Series to focus on some up-and-coming artists. 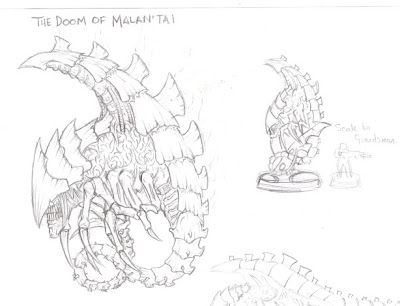 Iron Nid's Doom of Malantai concept sketch. An important aspect of it was his idea that the Doom would move by slithering through the air, held aloft by its massive psyker abilities.

This week, I'm posting up a few sketches by Callum MacDougall, who goes by the handle "Iron Nid" on the Warpshadow forums.


I've only got a few of his sketches, and he's a relatively new addition to the forums, but he's still, pretty much, the person who inspired this whole "Concept Series" thing. He posted some of his sketches to the M&P forum, I dutifully saved them in my "Tyranid Concepts" folder for later assimilation, and then I stopped. 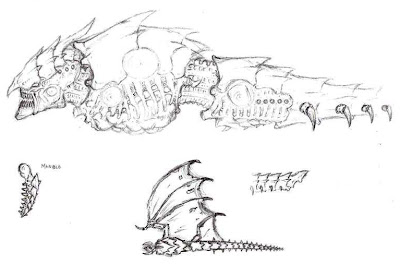 Hoo damn! If that's what the Harpy wound up looking like, I might have to contemplate lifting my nonsensical, self-imposed ban on winged Nids.

I thought back to a time when Moloch and I had been hanging in his workshop, and we'd gone through one of his "Tyranid inspiration" folders on his computer. He showed me shots of other people's models, many of which I'd never seen before, and he explained what kind of new, innovative, and inspiring decisions they'd taken with their conversions. The exchange planted a whole pile of ideas in my head, and it got me to start an inspiration folder of my own. As I'm rather obsessed with sketches, that inspiration folder split at the seems, spawning separate modeling and sketch folders. 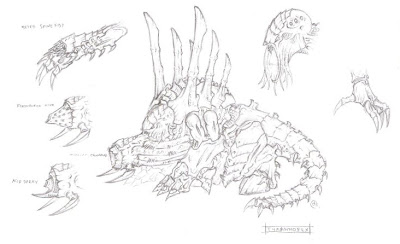 Iron Nid's Tyrannofex. Now that is more along the lines of the type of original concept I was looking for to represent this beast!

And, as I tried to cram Callum's sketches into that sketch folder, and I went back through some of the stuff I'd dropped in there over the years, I realized that I shouldn't be hoarding all this brilliant stuff away: I should be sharing it with other Tyranid artists in an easily-accessible archive. I thought the sketches might be a good thing to supplement a Tyranid blog, and when I asked Iron Nid if I could feature his work, he was all for it. So, though it was an indirect sort of process, I have Iron Nid to thank for inspiring me to share this stuff with other Nid collectors out there. Here's hoping that all of you find the material as useful and inspiring as I do, and I'll keep on posting up different artists for as long as I've got a supply of them kicking around on my hard drive.

That being said, if anyone knows of any artists who are doodling up some fantastic Tyranids, please drop me a line at modernsynthesist_at_gmail_dot_com.

Now, I'll leave you with Iron Nid's Tervigon concepts, which I think are both fantastic and original: 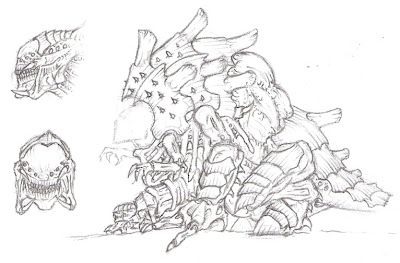 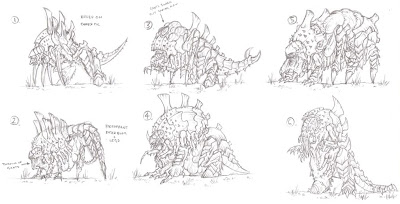