Spinal - A Grotesque Update--NOW in 3-D!

Okay, so maybe that 3D bit's a lie, but it is the case that I felt bad for not updating the Grotesque project on Friday, as I had been doing for the last two weeks, so I decided to use a new toy that just came in the mail to create a time-lapse-style video of me at work. It's the first time I've ever done anything like this, and the angle is a bit pants, but I thought folks might find it fun.
Featuring the sounds of fine, fine Canadian group MSTRKRFT. If you like the music, look them up. You won't regret it. Back to the video, though: I think that, should I do this again, I'll probably learn a lot from this initial outing.

So anyway, yeah: I got some more work done on the Grotesques this week, but not as much as I was hoping. Lesson? Don't predict that a week is going to be great for working until after it already has been!

Here are some pictures of the team in their current state:

The major development is that they all now feature external spines. That was the only development on the Aberation/Abomination/Squad Leader: 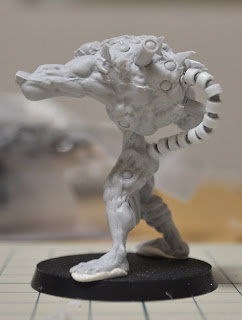 The trophy rack dude (let's just call him The Rack) got the beginnings of his over-sized external spine: 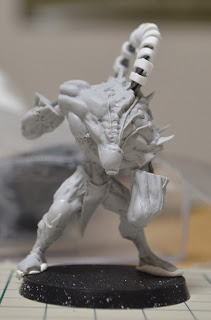 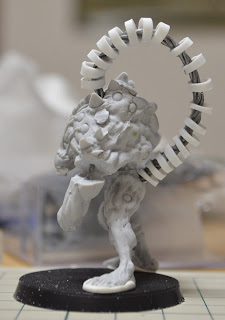 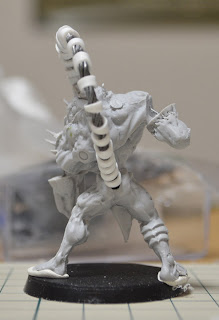 Next up: the liquifier-carting grotesque: 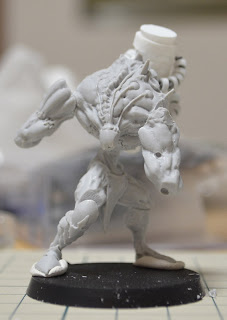 His external spine has mutated to the purpose of carrying around a tank of liquifier juice. I wanted to incorporate some device that would allow him to top up the tank from the slain on the battlefield, but all I could really think of was some kind of vaccuum, so I ditched the idea. 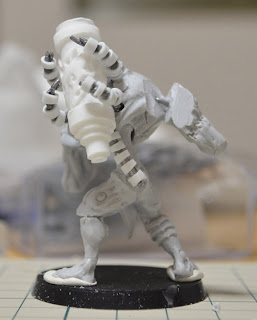 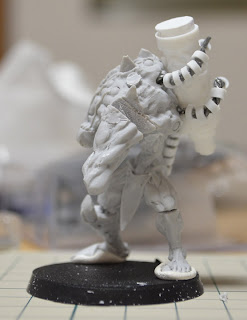 I modeled his external spine to stick pretty close to his body as it's meant to be running beneath the liquifier's tank. 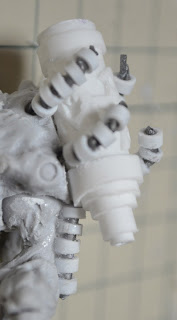 Here's the random tank detailing. That pattern across it was a happy mistake that was meant to be a more curved-and-bladed-looking casing for the tank. I now intend to add some greenstuff to it in the hopes that it looks like some kind of bony protrusions have grown in to encircle the tank. 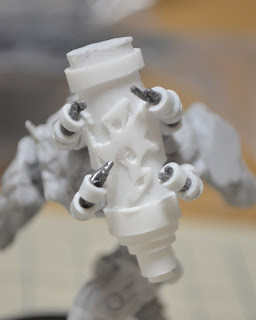 Next up, I'll need to expand on The Rack's spinal growths, and I need to see if I can't whip me up a Liquifier from some plasticard tube. Right now I'm having a hell of a time cutting plasticard tube straight. Any tips on that point would be appreciated!

In an annoying development, my order from Maelstrom, which I'd placed as part of their ROW sell-off, was significantly delayed by the number of orders they'd received. I'd pre-ordered some Talos to get bits to use on the Grotesques, and I was hoping they would ship out as soon as the release date. However, it still hadn't shipped by this week, and as I'm only going to be here until the end of July, I decided it might be a better idea to ship the whole order directly on to Canada. That means no Talos parts to play with until August :'(

...that was until Maelstrom mailed me this week to tell me that the order had shipped out to the originally-provided Japanese address, and not the Canadian one they'd say they'd ship to! Great in terms of getting the models to play with, but I'm guessing I'm not going to have a ton of time to use all of the models before heading home, so I'll, likely, be just paying to ship them on to Canada. Kind of lame.
Posted by Mr_Pink at 21:21