The Art of Jes Goodwin 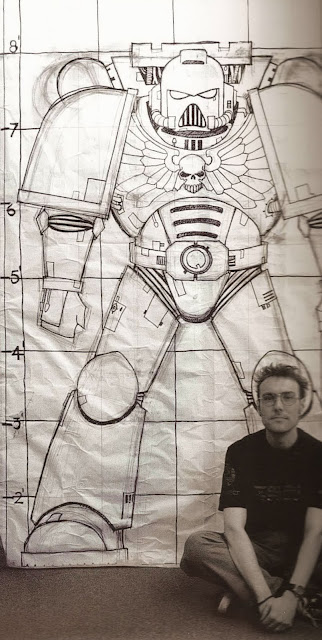 This is meant to be the first instalment of a recurring series that will showcase particularly talented artists who have lent their pencils to the Tyranid cause. I've been a fanatic for concept sketches ever since I--then a child--watched my best friend's older brother come up with sketches for the characters he was running in AD&D/Rifts. When it comes to converting and creating new Tyranid organisms, I have yet to find a better source of inspiration than the concept sketch.

And, if I'm going to profile some artists who have produced good, inspirational Tyranid artwork, what better place to start than with the man who, pretty much, set in stone the idea of what a Tyranid should look like: Jes Goodwin.

As the above photo of Mr. Goodwin demonstrates, he has been instrumental in defining the look and feel of large swathes of the Warhammer 40,000 model system through his work on the Space Marines, Eldar, Tyranids, and, most recently, Dark Eldar. Heck, the plastic bolters that every marine player out there equips their grunts with is referred to at the ".998 Godwyn pattern" Bolter.

As I dutifully purchased the Gothic and Eldritch book of Goodwin's art, and I continue to salivate over everything he ever draws up for the Eldar (despite not actually owning any Eldar models), it's safe to say that I'm a bit of an artistic fanboy for the man's work. I could fill this post with all manner of perfectly-executed pencil concepts he's created for a number of 40K races. However, I'll be focusing on his work for the nids, and I apologize for presenting such a limited selection of work as I haven't got my art books with me and, thus, have been constrained to only what I could dredge up from the Internets. 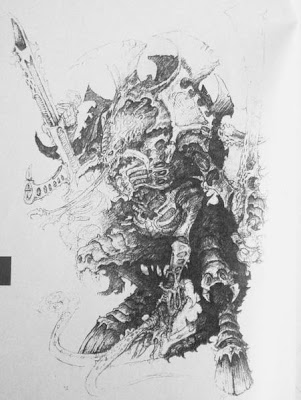 The first Hive Tyrant, unceremoniously scrapped in Third Edition in favour of a rough Alien Queen copy. Thankfully, the Tyrant returned to an updated version of this same concept in Fourth Edition. 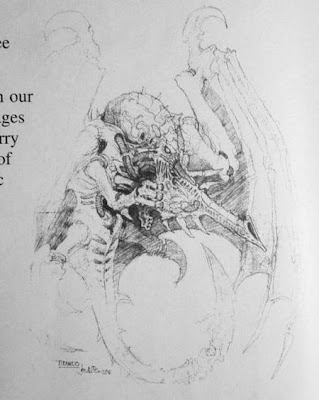 A concept from around the time of Second Edition, depicting the original Tyranid Gargoyles with their Flamespurt weapon. 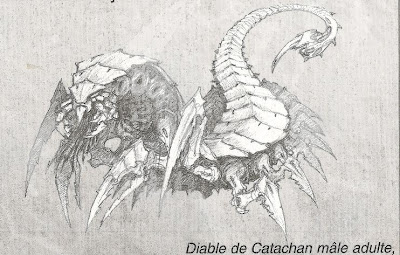 A concept for the never-before-seen Catachan Devil: a creature thought to be some lost remnant of an ancient Hive Fleet that may have preceded Behemoth.

Like I mentioned in the Screamer Killer post, it was the original pewter Carnifex, sculpted by Goodwin, that got me into Tyranids in the first place. Also, though I cited Hel/My Old One Eye conversion as being my first major attempt at sculpting and conversion, the reality is that it was only the first project that I actually finished. In reality, the first attempt I ever made at converting a Tyranid was a to-this-day-unfinished Lictor that I started in on when I had more motivation than skill, and that Lictor was based on the following sketch: 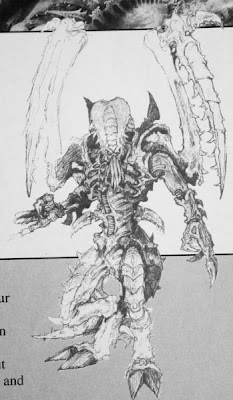 ...which, to this day, is still the most bad-ass depiction of a Lictor I've ever seen--accurately capturing the cruel alien intellect hiding behind the creature's eyes. I'll forever be jealous of Moloch for having been gifted a print of this sketch from Goodwin himself. All I have to gloat about is proclaiming to Goodwin--like a true fanboy--that I was intending to give the sketch life when he was in attendance at one of the first ever Games Days in Toronto. It was an exchange that I'm sure was completely forgettable, but I still cringe when I think about how young and brash I must have seemed.

Further things that Nid players should be thanking Goodwin for include the Forgeworld Hierophant. It's not a model I'm particularly fond of due to the fact that it's a scything-talon-stilt-walker (you won't find any of my bugs trying to shamble around on knife blades), but the thing almost overcomes that pet peeve with the way it adheres to the Tyranid design aesthetic (unlike the bloated-chicken Hierodule). That strict adherence to Nid design is thanks to a strict adherence to the original sketches for the beast, which, of course, were drawn by Goodwin (sorry about the horrible quality of the below photo; I haven't access to the original from GD Toronto 2004 right now, and I needed to poach this one out of a gallery on Warpshadow; don't bother trying to click on it for a closer look): 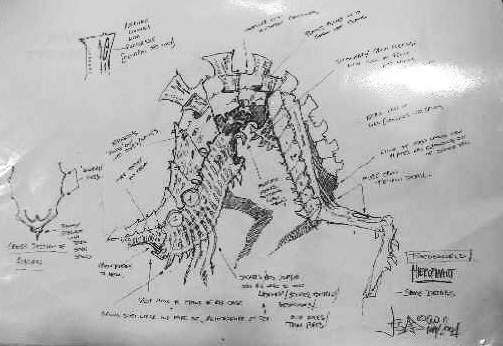 If we're keeping score, it was Goodwin's plastic gaunts and warriors that were the only models to survive the aesthetic disaster that was the 3rd Edition Tyranid release (yes. every single one of those metal models is now gone. gone gone.), he gifted us with the long-awaited rejuvenation of the plastic Genestealers, and, of course, he was the mastermind behind the biggest and most salivated-over Tyranid release in 4th Edition: 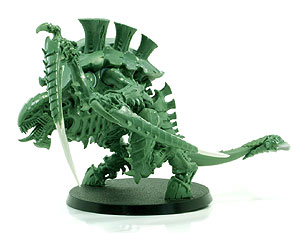 The plastic carnifex: a godsend for Tyranid modelers everywhere. That is a shot of the original green of the model, back before the introduction of all this newfangled CAD-sculpting. I could fill a whole post with all of the wild and wacky conversions that have come solely out of cutting up this one kit. It was sculpted by Goodwin and based on the following concept sketch: 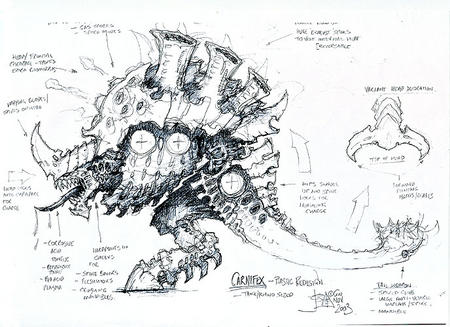 With the Tyranid release in 5th Edition, it got harder to determine exactly who sculpted what as GW seems to have moved away from openly publishing a model's sculptor in their online catalogue (likely to avoid creating fanboy cults for and against given sculptors). However, from a previous discussion around the difficulties of creating a new concept for Gargoyles that wasn't just gaunts+wings, I'd assume Goodwin had a hand in the plastic gargs.

Going forward with the whispers of plastic Tervigons, Tyrannofexes, and Hive Tyrants, I'm thinking I'm not the only one hoping that the design concepts for these new models are coming down from one of the longest-serving and most faithful of Tyranid artists.

If you're a Goodwin nut, too, and you're looking for an artistic fix, I'd recommend Gothic and the Eldritch, the book of Jes' art published by Black Library back in 2004. I think it's out of print now, so it's likely a little hard to find, but I'm sure it turns up from time to time on eBay and in the Amazon Marketplace. I, fortunately, picked up a copy back in the day, and though it's not wall-to-wall Nids, it is all Goodwin, and there's a lot of great stuff in there that can inspire some new ideas and conversions.

Next up in the Concept Series, I'll turn my focus to the talented amateur artists in the Tyranid community.
Posted by Mr_Pink at 21:17