The Art of Warren Beattie 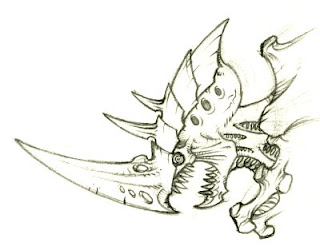 This is the second installment in the Concept Series: a recurring feature here meant to showcase the concept sketches of both professional and amateur Tyranid artists. When it comes to converting and creating new Tyranid organisms, I have yet to find a better source of inspiration than the concept sketch. The goal of this series is to make sure this work is visible, allowing converters and kitbashers to get new ideas for diversifying their swarms.

We started the series off with an artist as professional as they come: Mr. Jes Goodwin--a man who has been defining the Tyranid aesthetic since Andy Chambers was called The Great Devourer. This week, we switch tracks to an amateur artist (in that he is not employed by GW), and as the series progresses, it will feature many more amateur artists. However, the decision to start with Warren Beattie was a conscious one as he was the first to ever pop up on my radar, and he may be one of the finest amateur, 40k-related artists I have ever run into. 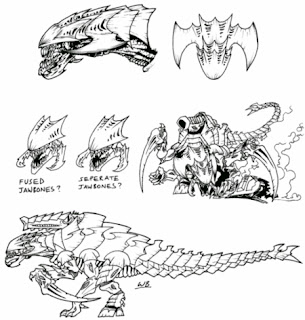 Or, perhaps, this version that he coloured up for Hive Fleet Moloch: 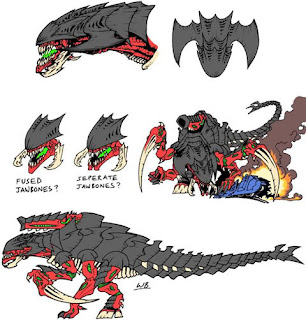 Vermis' sketch that had the strongest impact on me, however, was another one he whipped up in 3rd Edition:

It was for a Tyranid Warrior-based Hive Tyrant Guard. This was back at the time when Tyrant Guard had only just been added to the codex, and the models were striding around with two-handed spineshields and funny armoured hats. Their asymmetrical bioweapon load-out (a two-handed spineshield on the left with a single rending claw and a single lash whip on the right) made little sense in the new era of symmetrical bioweapon arms, so Vermis redistributed the creature's weapons, while at the same time tying them in more closely with the new plastic Warriors and Gaunts.

Vermis also redistributed the Tyrant Guard's large shields, breaking them up into sets of carapace plates along the creature's limbs. The idea was that the Guard could bring these plates together when it needed to protect the Tyrant from incoming fire.

Those of us on the Tyranid boards at that time thought it was a brilliant idea, and I think most of us took a crack at converting it up. The concept what so strong that when Roberto Cirillo's concepts for the redesigned Tyrant Guard surfaced in 4th Edition, some members joked that GW must have provided Roberto with Vermis' sketches to work from. We were having a laugh, but the truth in it was that Vermis had nailed what a Tyrant Guard should look like even before GW had settled on an acceptable design. I think that--to this day--I am not fully satisfied with the existing GW Tyrant Guard models because, as illogical as it may seem, they have yet to get the concept right: that is to say, they had yet to get Vermis' concept right.

Another huge contribution that Vermis' made to the online Tyranid community a couple of years back was his support of a mad idea that Moloch, Hive Trygon (now better known as Ed Fortae of Troll Forged Miniatures), and I had come up with. Jes Goodwin had just resculpted the Tyranid Genestealer plastics for their inclusion in the "Battle for Macragge" 4th Edition starter set, and our little group set out to use those plastics as the base material to further explore Genestealer genetics. We wanted to convert models to represent what might happen if a Genestealer infestation took hold on a planet inhabited by a race other than humans (ex: Orks, Eldar, Kroot, Tau, etc.).

To this day there is a chicken-and-egg-like fog in my mind, whereby I can no longer remember if it was a sketch of Vermis' that gave us the idea for the project, or the project that gave Vermis the idea for the sketch. All I do remember is that Moloch was pestering Vermis to sketch him up a Ork-Genestealer hybrid, and when Vermis finally did, here's what it looked like:

From that sketch, we succeeded in convincing Vermis to join our merry band and to contribute his artistic talents by whipping up some concept sketches for the various race-x/stealer hybrids. 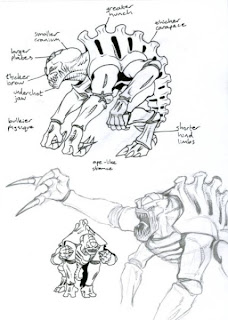 We invited Pedro Navarro to join the project (and I wonder if it was that invitation that sent him down the mad path to Biodiversity), and we gave the group a name: Genoproject. There used to be a nice feature on it up on Hive Fleet Moloch.com, but Moloch has been having some difficulties with the site of late, and the link is currently dead (meaning that I no longer have access to photos of my own Eldar and Ork stealer hybrids :( ). We got out a couple of stealer hybrids, but then we all got distracted by our various Real Lives, and the project was put on hold

I did, however, manage to find some shots of Vermis' own conversion/sculpting work to bring his Ork Stealer concept to life, and he did a far better job than I ever did: 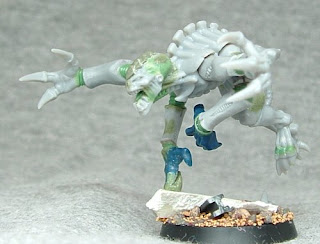 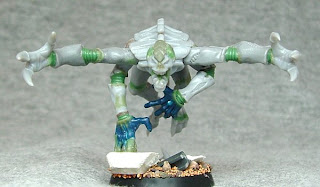 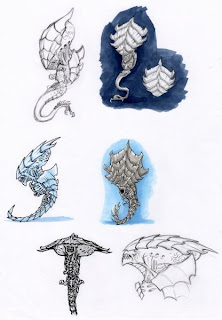 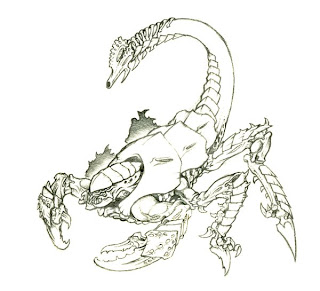 ...and this cute-looking, armoured brute was his answer to the Tyranid Malefactor transport: 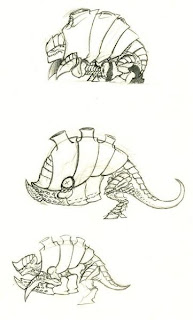 Here's a bad-assification of the 3rd Edition Grinfex, and it should be noted that Vermis was so sold on this concept that he actually started a model for it (a rare thing!). 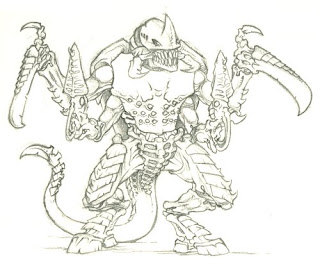 Now for some laughs. The following sketch was inspired by an actual game event where a Ratling Sniper infiltrated into a tiny belfry in a piece of area terrain, but the Tyranid player had already noted that structure for the secret deployment location of his Lictor. Poor, poor Ratling. 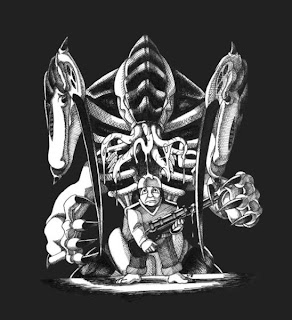 And, finally, we had a drawing competition on Warpshadow a couple of years back to try and drum up some more Tyranid concepts. Vermis entered the following and absolutely blew the rest of the entrants out of the water: 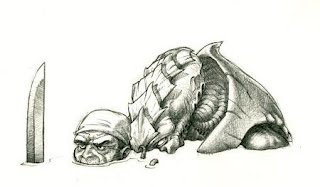 Though I haven't been in contact with Vermis for a while, if anyone likes what they see here and would be interested in trying to commission Warren Beattie to do some artwork for them, drop me an email, and I'll likely be able to track him down.

Tune in again next week for the next installment in the Concept Series, and if you know of any skilled Tyranid artists who should be featured here, let me know at modernsynthesist_at_gmail_dot_com.
Posted by Mr_Pink at 20:29