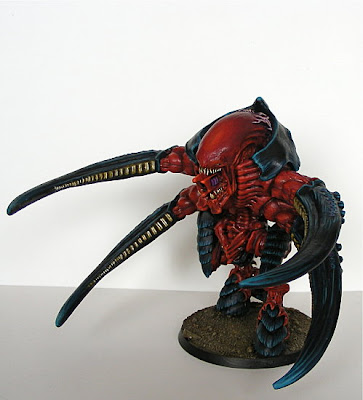 The classic Jes Goodwin pewter Carnifex/Screamer Killer has always inspired me. When they look at it these days, most people see an oddly constipated-looking beast intent on giving someone a big hug with those curvy arms of his. However, when I look at the thing, I see the model that first got me into Tyranids specifically, and Warhammer 40K in general, back in the mists of second edition. It also reminds me of the black-and-white sketch that greeted me when I first opened the Tyranid codex all those years ago:


Though I love the pewter Screamer-Killer, and I still field them to this day (well, on the few occasions when I actually play), I’ve always felt that there was so much more potential in that sketch than the rudimentary casting processes GW used to use could ever truly capture.


Thus, when Warpshadow came up with the idea of doing another Games Day table to follow the success of the Infestation of Casavant Prime project, and it was decided that we would endeavour to depict Hive Fleet Behemoth’s invasion of Tyran, I suggested that we do this thing right and attempt to remake the original Tyranid sculpts using modern models. Different forum members came up with solutions for “pre-heresy” (as it were) modifications to the current plastic Warriors and pewter Hive Tyrant to throw back to their origins, Moloch loaned us some of his beautiful Moloch Lictors as well as some of his pewter Hormagaunts, but I think my one motivation in this whole thing was to do an old-style Screamer Killer using the new plastic Carnifex kit.


I also eliminated any trace of a neck to tie it in more closely with the original creature. I eliminated the carapace plates on the head and modified it with apoxie sculpt to make it long and smooth, running back over the creature's shoulders. I also mounted the barrel of a Stranglehorn Cannon in the fex's mouth to represent the bioplasma biomorph.


The legs were modified to make the creature stand more upright, as well as to give him those classy "bell-bottom" hooves that the original had.


Finally, I whipped up some custom can-openers from scratch to take the classic Screamer Killer's scything talons in a new direction.


Fortunately, I was also able to inspire up-and-coming Warpshadow member and all-star modeler, Bocks, with the idea. In the time it took me to finish my one Screamer Killer, the Bocksman churned out two. Here his first SK towers over my own: 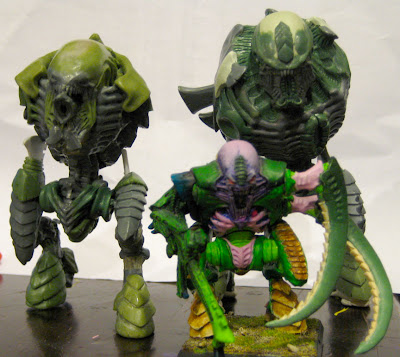 Bocks also scratch-sculpted a biggified copy of the original Screamer Killer claws for us to cast and use on our models. I came up with my own scratch-sculpt of some can-opener claws (completely departing from the original design for them), and I’m sad to say that the Bocks Claws came out far better than my own chunky numbers.


Though the beast came out looking as constipated as his forerunner, I was particularly pleased with the way the long, smooth head came out. I could understand how this weird design decision on the original Screamer Killer could put folks off, but it was always central to the design in my eyes, and I wanted to make sure it was preserved in my version of the beast. The legs/feet came out alright, too, and though there are, of course, areas where I could have done better, I feel that, overall, the beast is similar enough to the one that inspired it. Here are some photos of it completed and assembled that were taken by its painter. 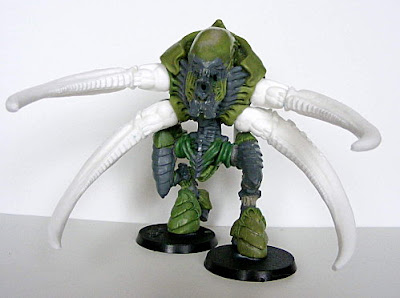 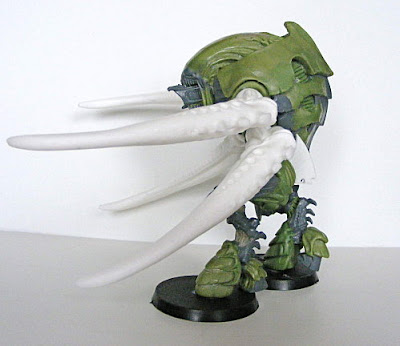 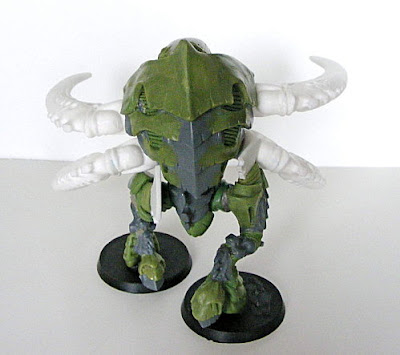 To continue on with the idea of the Tyran table build being a team project, we had various forum members contribute bugs from various parts of the world, with still other members painting up different parts of the swarm. As its been two years since the project, I would probably fail spectacularly if I tried to enumerate all of those contributors now. Here's one of the threads on Warpshadow about the project that probably does a better job than I could hope to of immortalizing all those fine folks (I think you might have to be logged in to view it).

That being said, I very clearly remember one contributor in particular: Eric Lambert (or Hellric, as he’s known on the boards), who volunteered to put his masterful brush to my Screamer Killer, applying the Behemoth scheme to the beast. 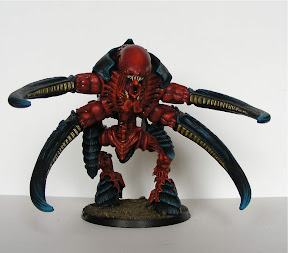 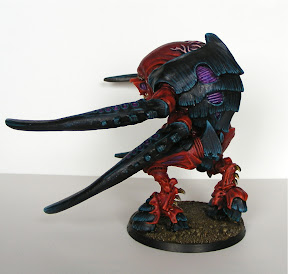 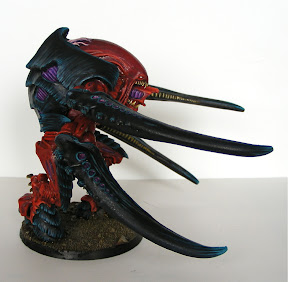 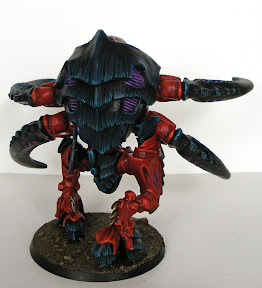 And here he is with one of Eric's Screamer Killers to give an idea of scale: 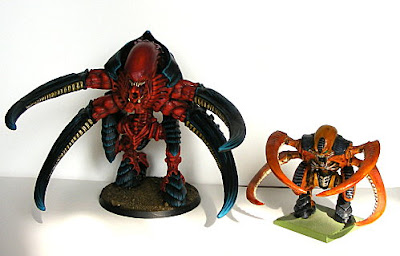 The pictures do a good job of highlighting his work, but—as is the way with these things—when I received the actual model in the mail ahead of Games Day Toronto 2009, I was utterly blown away by how much more detail was present in person. I owe Eric big time for the work he did on the Screamer Killer, and though I was unable to repay him immediately, it’s something that has always stuck in my mind which I would like to get to some day.

If you like winged horrors or giant Japanese battlesuits, you should really give Hellric’s blog a run through.

As always, here is the in-progress thread on Warpshadow, and both I and Bocks posted in it about our progress on our models as we built them (though it’s in an area of the forums that you need to be logged in to view).
Posted by Mr_Pink at 17:12