This is the Week 8 update for mine and Brother Pink's Paint Yoshit Challenge, and also happens to be my final update on my progress/participation in Stepping Between Games' Squaduary challenge. To review, here's where we are in my own Squaduary schedule:

...and what do I have to show for myself?

I had been hammering away at painting yesterday to have as many models as I could absolutely done for the Squaduary deadline at midnight on February 28th, but then I saw this post from Rob over at Broken Paintbrush about how he'd failed at Squaduary.

Except he hadn't. Not in my eyes, at least. Sure, his Orc Bloodbowl team wasn't based, but they looked pretty great to me!

...which made me realized that I could base the models I had in their current state, and call it done, even though I knew I'd have to go back later and touch up/finish some of their details. So I got out the pin vice and my already-painted bases and set to work!

To review, I took on a VERY AMBITIOUS pledge at the beginning of Squaduary. I'm working towards a tournament deadline at the end of April for my Genestealer Cult, so I thought Squaduary would be the perfect thing to get me ripping through painting most all of my infantry for that tournament force. Here's what that looked like: 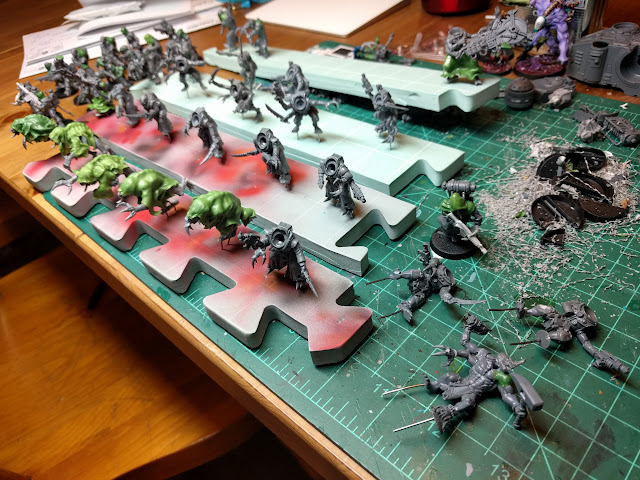 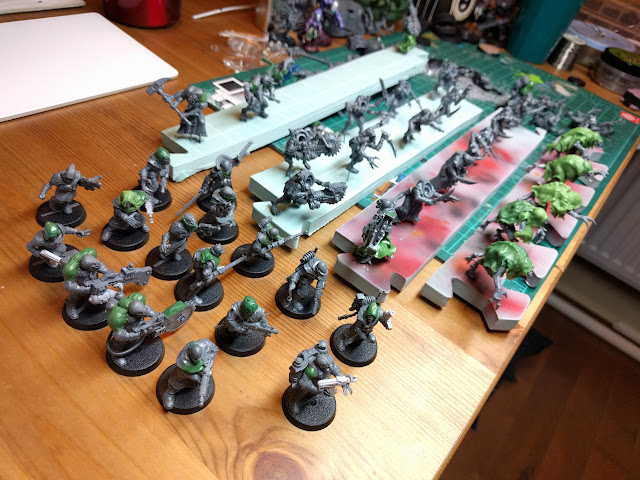 All told, that was about 46 models...which is nuts for a challenge where you're supposed to paint a squad. But I had an airbrush, so everything was going to be FINE!

In the end, I wound up completing three squads, for a total of 21 models, which is less than half, but I'm pretty happy with that I DID accomplish. 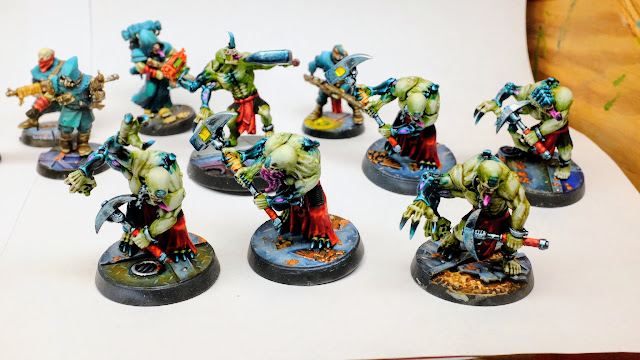 - 6 Aberrants: I'm not really sure why, but I REALLY love the Aberrant models...particularly with their power hammers. Thought there are still some final touch ups to be made, I'm really happy with how these guys came out—especially the one who's setting up to hurl the dynamite. 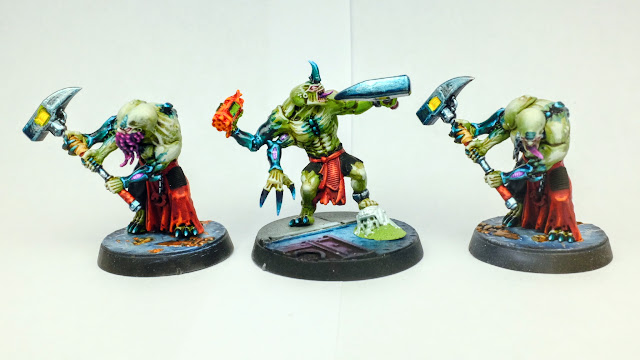 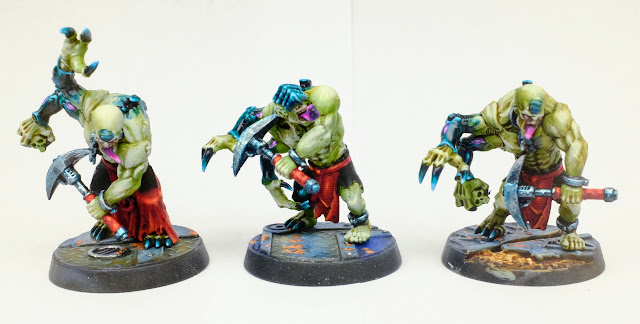 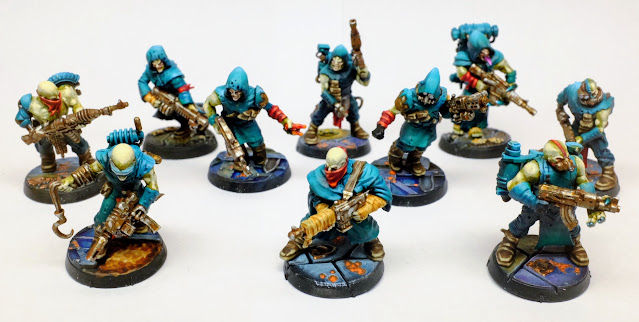 - 10 "Unwashed" Neophytes: In addition to my standard, vanilla genestealer cult neophytes and acolytes, my force has a separate combined arms detachment, and I modelled the neophytes and acolytes in this detachment from Chaos cultists to be a separate cult militia drawn from the "unwashed masses" on the planet. These guys have not officially be inducted into the cult yet, so their kit is hodge-podge and rusted out. That being said, I still feel their uniforms are too uniform and clean, so I might try to dirty them up a bit with some more washes. 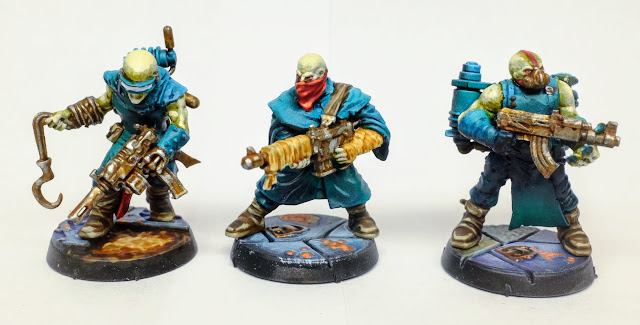 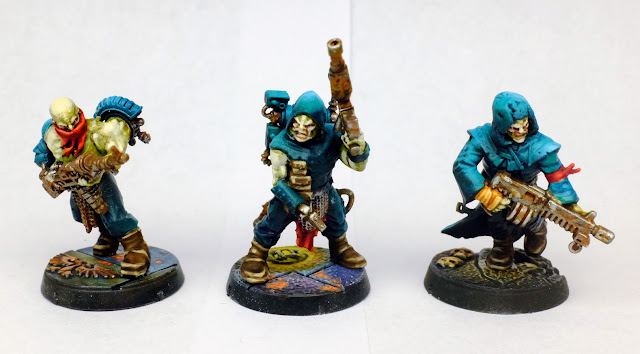 - 5 "Shrouded" Genestealers: Of all the models I've completed this week, the Aberrant may be my fave, but the shrouded Genestealers are the ones that have grown on me the most. I wasn't really sure if this concept of disguised genestealers was going to work, but I'm really happy with the end result! That begin said, I most regret the decision to transplant them to larger, non-slotta bases without pre-cutting the bases to somehow fit their slotta stands. I'm sure I'll regret this even more when they all snap off their bases >:( 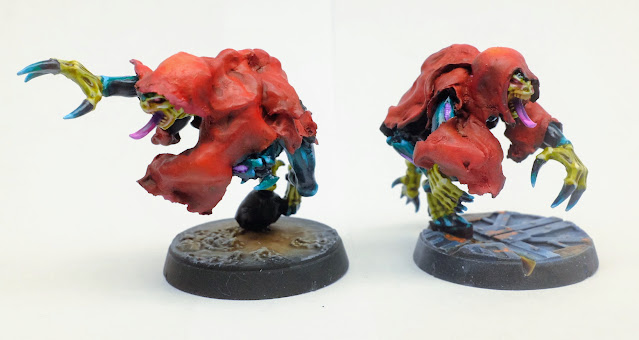 Added to the rest of the force on my display board, they look like this: 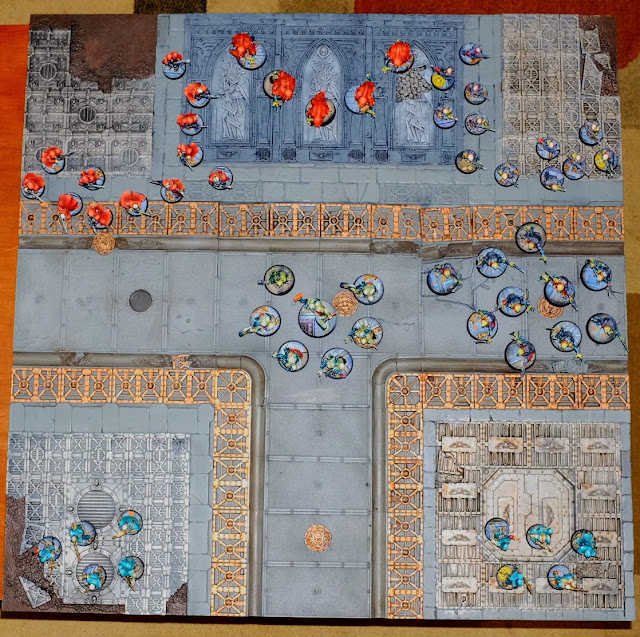 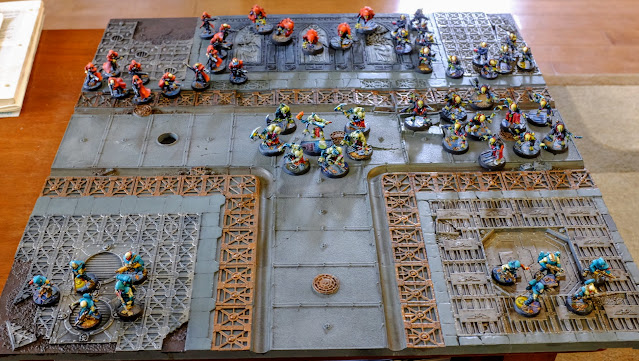 - 1 Bloodbowl Nurgle Spawn: This one's kind of a bonus. It's a commission I took on for one of the dudes at our local GW. It's the second commission I've done for him, and I promise I'll post a separate post about my bloodbowl work in the not too distant future! 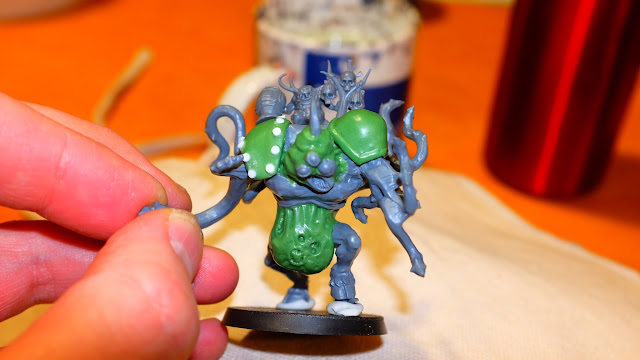 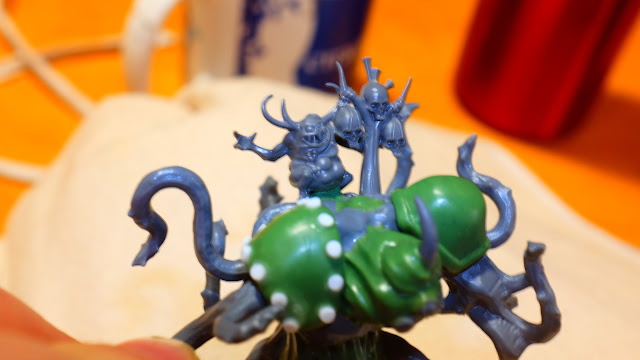 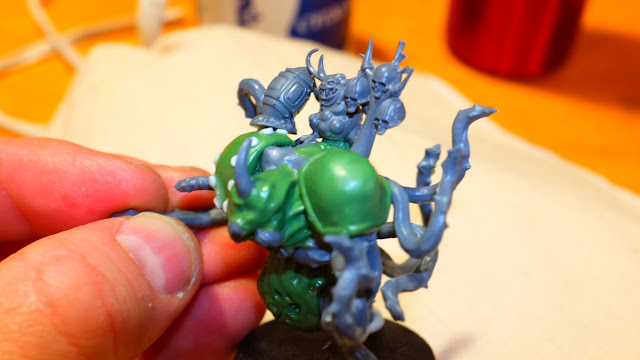 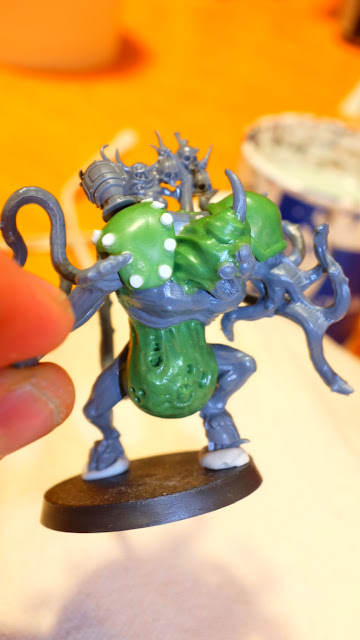 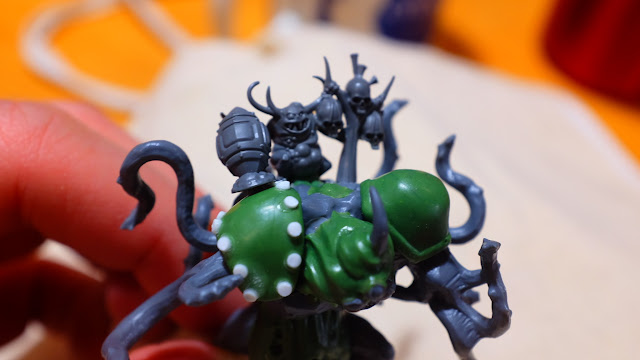 Same junk that was still in progress last week. I'm feeling a little bit of painting burn out right now, so I'm hoping I can polish these off as motivation strikes around other projects.
- The 10 Red Cloaked Acolytes
- The 8-or-so Normal Armour Acolytes
- The 7 "Unwashed Masses" Acolytes

Here are pics of them anyway in the hopes of shaming myself into speedier action: 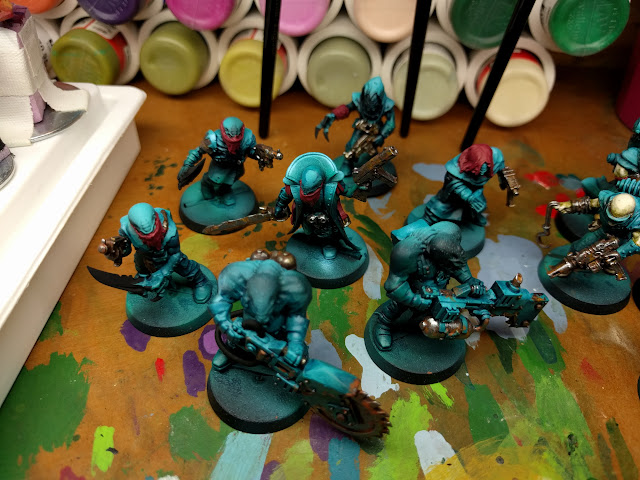 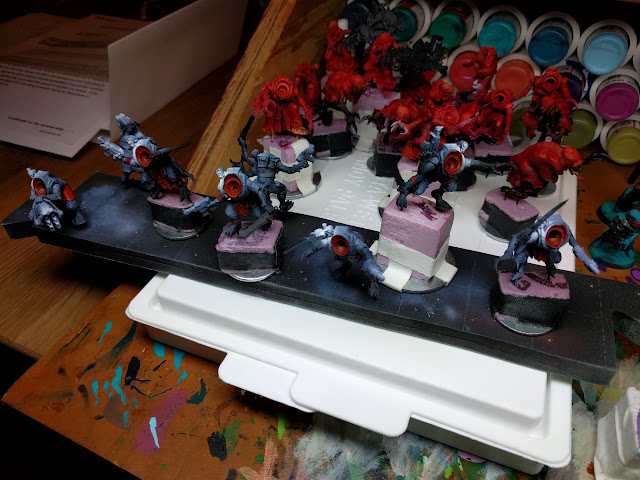 With #MonsterMarch coming up, I took a trip to my local GW for a conversion event their were hosting as part of the North American Inner Circle competition. I had intended to get back to converting the rest of my Hybrid Metamorphs, based on this concept mini of mine: 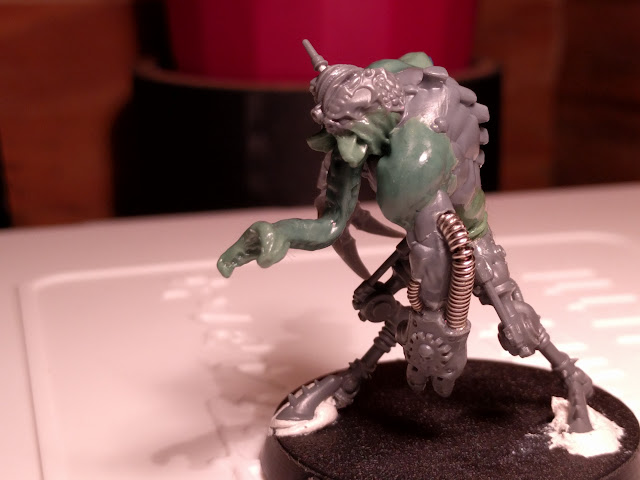 However, I instead started working on my Patriarch model, positioning and pinning the extremities that hadn't yet been attached, and I kind of ran away with the project, resulting in the following whose gaping throat maw had our GW's Manager dry-wretching from revulsion (his back plates are blutacked on): 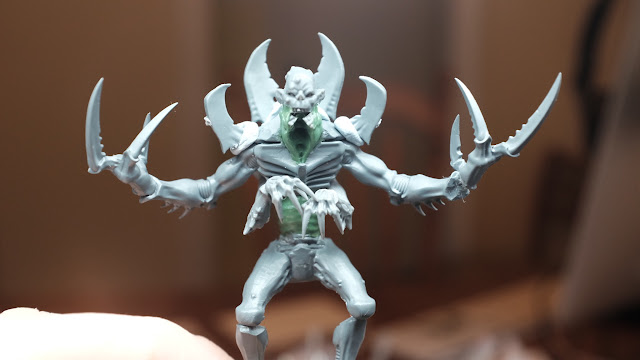 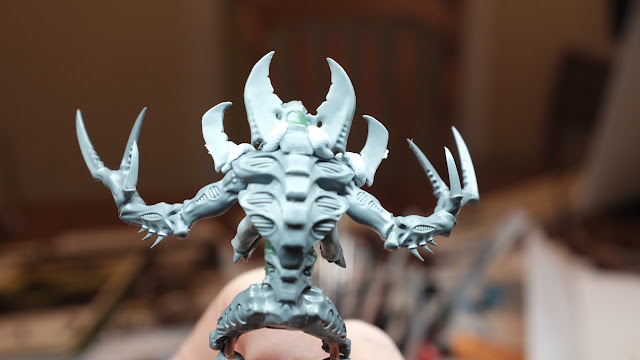 I'll be diving into #MonsterMarch with the Patriarch being my pledge, but I'll also be hosting a MechMarch of my own, wherein I'll try to finish up the following mech projects for my genestealer cult: 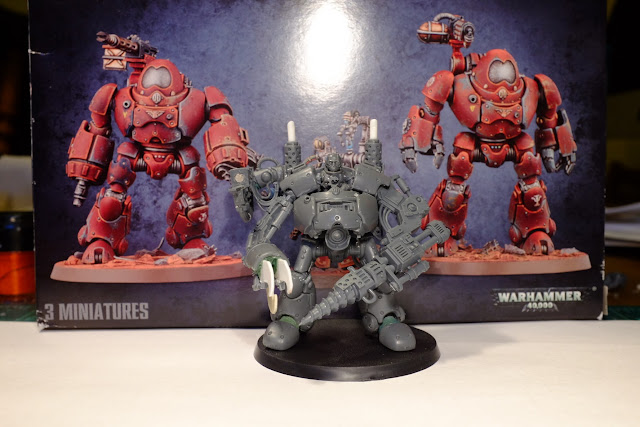 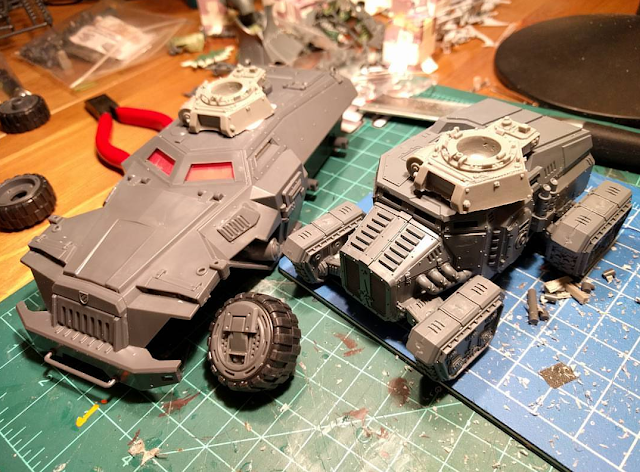 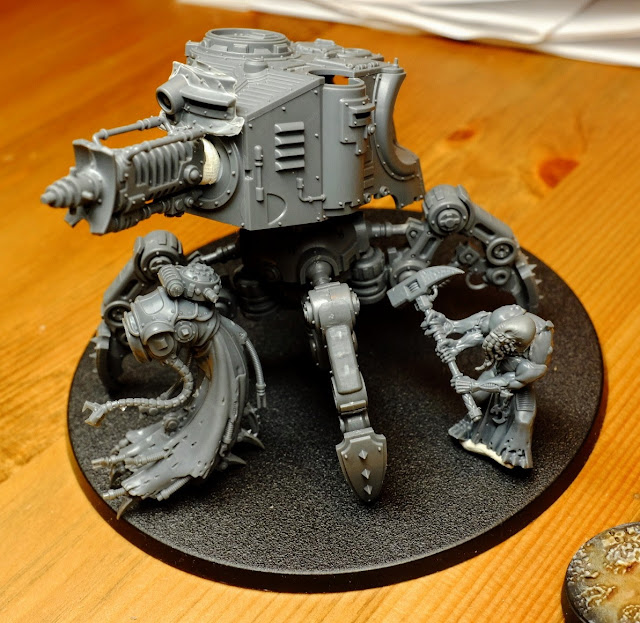 How did the rest of you make out with Squaduary?
Posted by Mr_Pink at 13:00