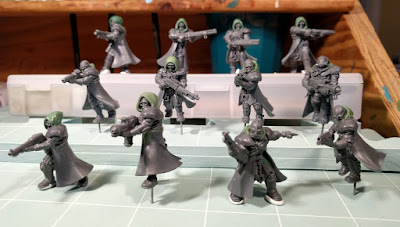 Though I shared some shots of these guys as part of the Paint Yoshit Challenge, I love them so much that I think I need they need their own post. They've also been pretty popular on Twitter and Instagram, with a bunch of people saying they reminded them of House Delaque from back in Necromunda days. 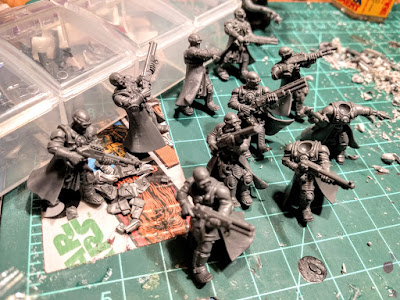 These guys came out of a want to make some slick Neophytes that would stand out from the rank and file, whole serving as appropriate escorts for my Primus.

The unit type "Enforcer" is pure invention on my behalf, but it seemed appropriate

In terms of the conversions involved, they are fantastically simple. Just get some Skitarii Ranger torsos, which have the sweeper jackets built in. All you need other than that is a box of Genestealer Neophyte cultists. That box provides the shotguns, heads, and legs...though I guess I cheated and high-graded two separate boxes to get enough running legs and more human looking hands and arms for the shotguns...and two flamers.

Once you've got the bits, the hardest part is just cutting down the hips on the Neophyte legs so that they fit in under the Skitarii cloaks. It mostly involves cutting off their holsters and grenades. I'd do them custom for each upper torso as each has different clearance under the cloak.
Then you just glue the legs in, the arms on, and a neophyte head, and you're golden. 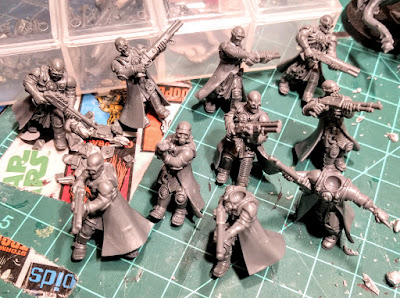 Also, if you're not a cult player, all you need to do to imperialize the conversion is cut off any genestealer sigils, and swap the heads for something less freaky. Conversely, non-admech players should probably remove the sigils from the fronts of the torsos. However, my cult is based on the bladed cog, and I intend to paint these guys with red robes (I'm using red robes to mark the upper echelons of my cult). These red robes serve the double purpose of making them look like actual admech troops, which I feel like suits their fluff as a sneaky force subverting admech authority!

The only extra work I did for this squad was add some shoulder pads that I had left over from the passenger models for my Dreamforge APC, which I'm using as a cult limo. Here you can see a comparison of two enforcers with shoulder pads left and center, then one without on the right. I elected to five all the guys one shoulder pad on their left shoulder, then the squad leader with two. 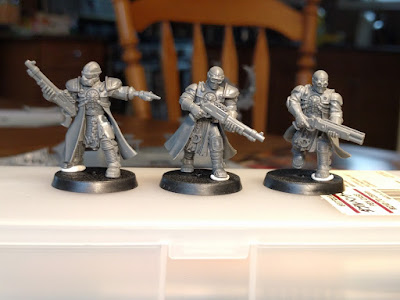 I also had to convert two more special weapon enforcers as these would be a 12 man squad, and the Start Collecting Skitarii box had only 10 rangers.

For the first extra, I grabbed an upper torso out of the Onager Dunecrawler, some Neophyte legs and the lower cloak/jacket from a Genestealer Primus. They all fit together pretty well with minimum Greenstuff. He's on the right below: 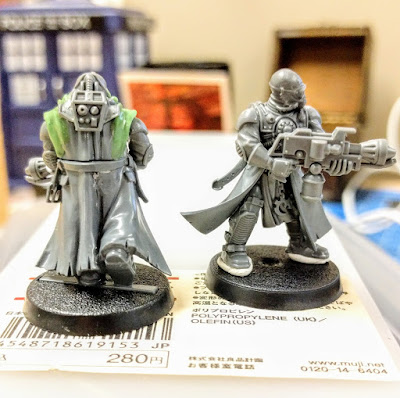 The second one (on the left above), I love a little more. He's based on what is pretty much the best of the chaos cultist models with the big coat. I'm a masochist, so I cut down a neophyte mantle so that it would fit inside the models jacket at the front, and over it at the back. It didn't fit perfectly, so I left a little gap that I had to Greenstuff in. Then I plunked an appropriate Acolyte head with re-breather on. Here's the front view on him: 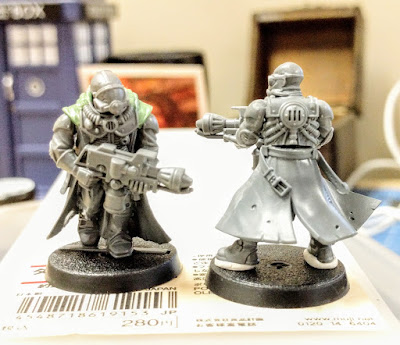 In the end, I love the bulkiness of the model. I feel like he cuts the shape of "enforcer" a little more convincingly than the rest. I would not want to mess with him.

At that point, the Enforcers would have been good to go, but, like I said, I'm a masochist, so I decided, inspired by my Quinlan Primus concept... 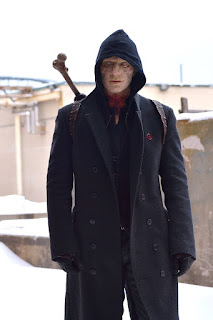 ...that they'd look even better and more covert/sneaky with hoods. Out came the greenstuff!

Bar some experimentation on my chaos-cultist-come-neophyte-unwashed-masses minis, this was my first time seriously sculpting hoods. 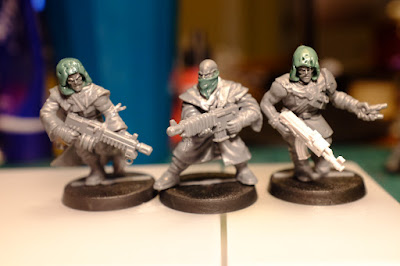 Like I mentioned in the Paint Yoshit update,  I'll be doing a tutorial on How to Sculpt hoods soon, but for now, here is a look at how they turned out: 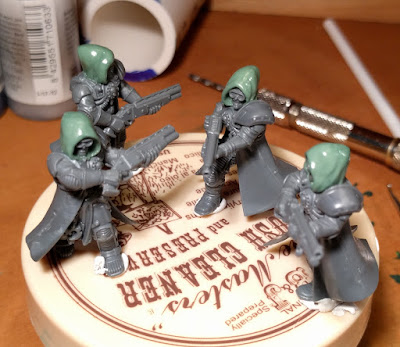 That was the final batch of hoods. The earlier ones turned out far rougher :P

As these Enforcers are meant to be really coming to get 'cha, and a bunch of them are running forward, I also tried my hand at sculpting some hoods in the down position. 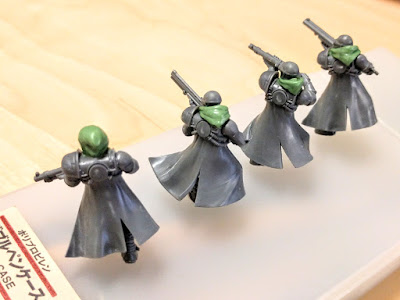 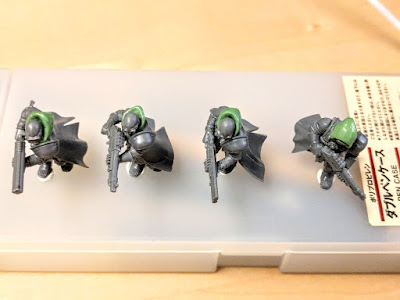 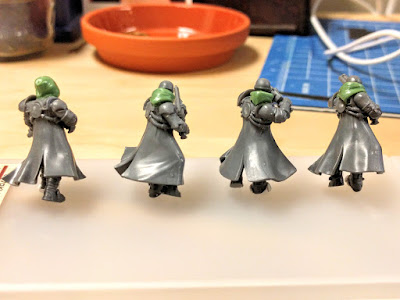 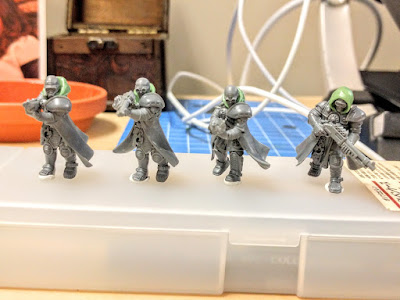 In the end, they all came together as a pretty badass band!

They're also the perfect evidence that the Genestealer Neophyte box is a VERY versatile kit for creating troops beyond worshipers of the cult. I feel like with the removal of a few cult icons, these guys could very easily fit into any imperial force.

Here are all 12 of the Enforcers all ranked up and ready for priming. I hope you're as happy with them as I am :D 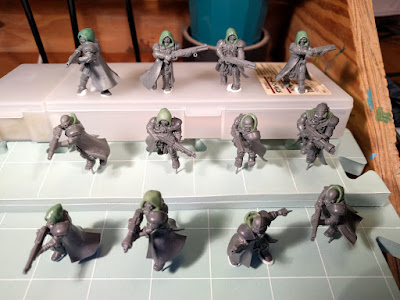 ...and apparently Google photos hates me, so I can't find a way to make this photo of the back row NOT hideous and stretched :P

What do you think? Too much work for a simple squad of neophytes? Or a decent way to inject some character into the cult's rank and file?
Posted by Mr_Pink at 09:10