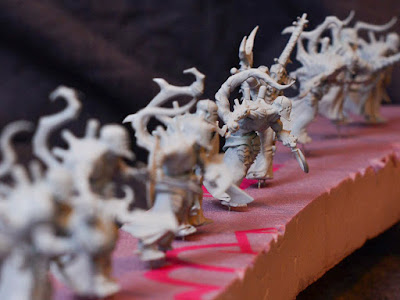 Well, I've officially polished off the first part of my November modeling vow by completing the conversions and sculpting on my first unit of Wracks since the Bob's Big Bad Coven commission. 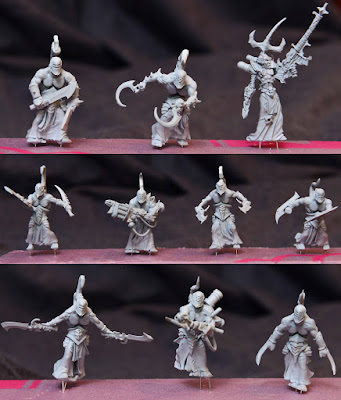 Why go to so much work, employing bits across to many different stock models?

1) Wracks are expensive. Close to $50 for 5 models? If I want to have any hope of fielding a full carnival of nightmares (or whatever the formation is called), I'm going to need about 45 wrack models. That is a whole lot of $50 boxes when it takes $100 in wracks to build a 10-man squad I'd rather just bits order the parts I need, along with some bits I already have lying around, to pump out 10-man squads for close to $50. 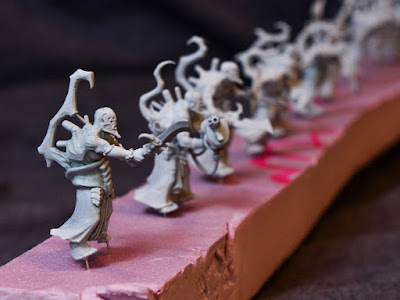 2) Conversions are fun! If you've been following my work, you know I'll never use a stock model when I can, instead, use something more interesting/converted. 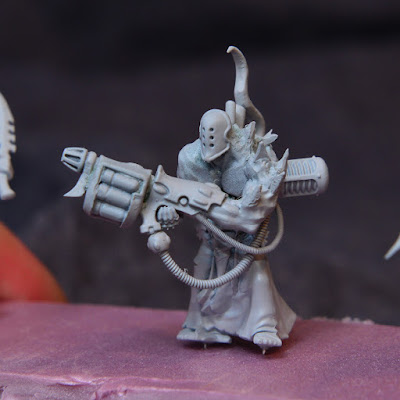 3) Wracks are boring. I remember getting the Haemonculus Covens book and nearly falling asleep when I looked at the modeling pages. I actually wondered if they'd painted all those wracks, or if they'd simply copy and pasted the same five models over and over again. It could have been done so simply since the 5 sculpts in the box are, pretty much, copy-and-paste jobs of one pose with slight changes.

That's a lot of words. Here are some photos that I think illustrate why I've done what I done very clearly: 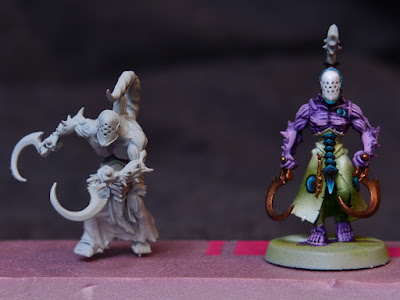 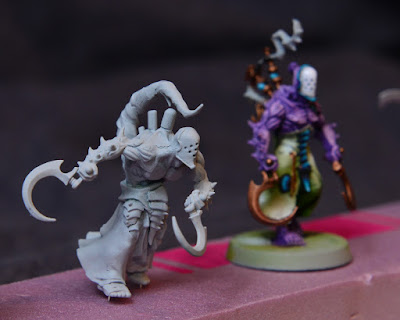 See? Bent, twisted, muscled, and very clearly coming to tear you apart! I liked that initial wrack, assembled stock from the box, but I love those scythes so much more on a model who looks like he might have the first clue what they're meant for.

This is my vision for wracks. Sure the original pose has a kind of mindless, implacable legion vibe to it, but the hunched profile of the bloodletters, combined with the dynamic posing of the flagellant legs, does a much better job, in my opinion, of depicting a twisted and dangerous servant warrior of the Haemonculus fleshcrafters.

Here's hoping you like them as much as I do >:) 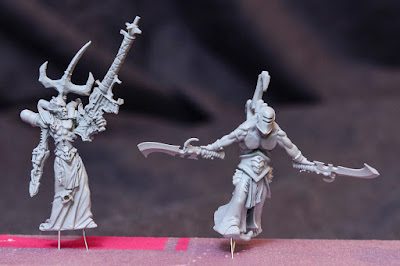 That old Haemonculus in the above photo is meant to serve as the squad leader. The fluff I came up with for it is that certain haemonculi who have fallen out of favour with the ancients in my coven and stripped of their mask and demoted to doing menial things, like leading wracks into battle.

Really, I wanted an excuse to include every haemonculus model GW has ever made in the force, but the old pewter ones were too hideous for positions of power in the army. 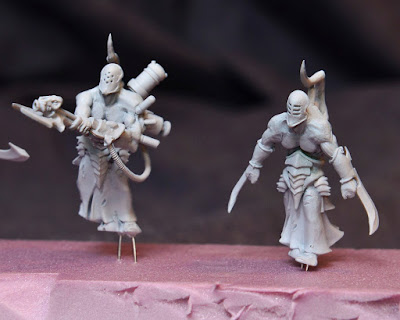 ...and though I did an arm swap on the Haemy to give him a Hexrifle, I wanted to preserve his destructor as the squad's Liquifier (see above) 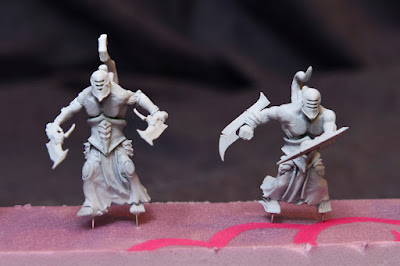 The blade bits I used came mostly from hellions (those glaives are AMAZING as knives/cleavers), and Skaven. 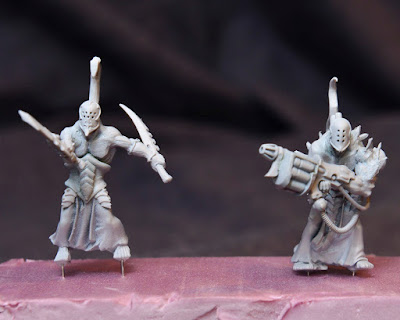 Above you'll see my converted Osteofactor. I built it from some discs from the Talos kit, a gun from a Wraithguard, some tubes from the back of a scourge, and one of the thrusters from a helion. It's beefier than the actual model, but that works for me. I've also modeled that wracks to look like the munitions are spilling into his system and causing some unfortunate bone growths. 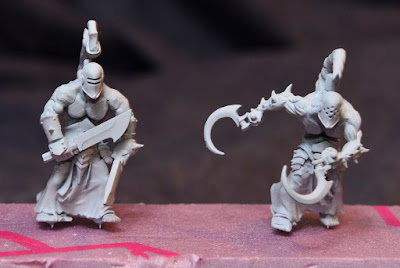 ...and here are some more random shots: 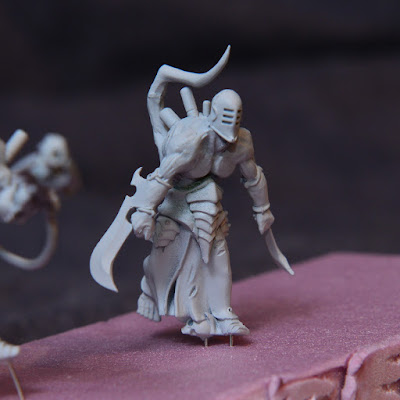 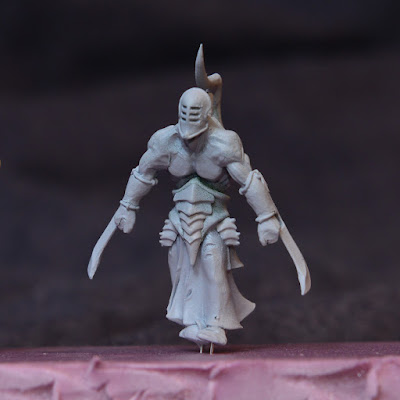 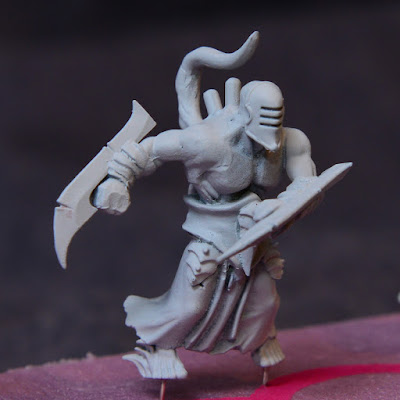 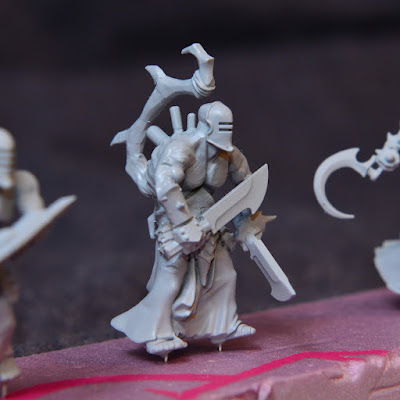 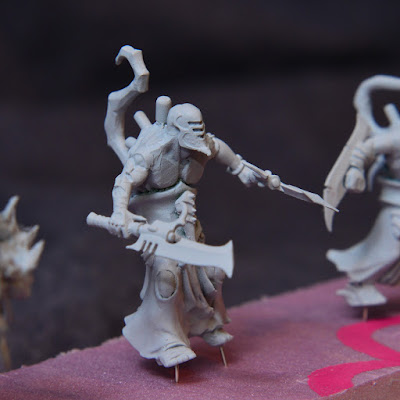 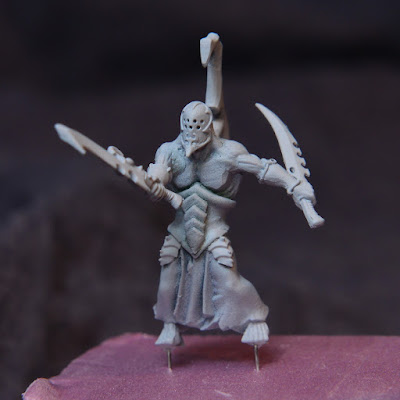 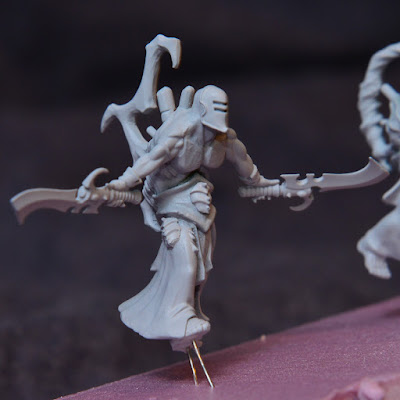 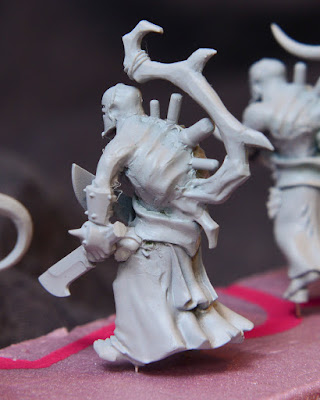 The beauty of Savage Orc Bows! 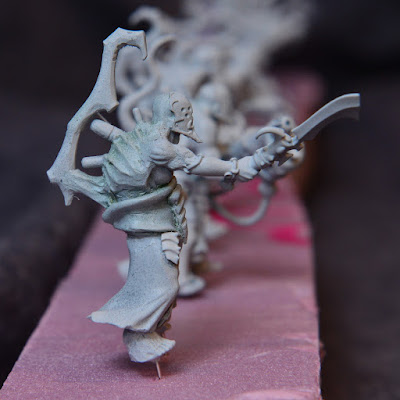 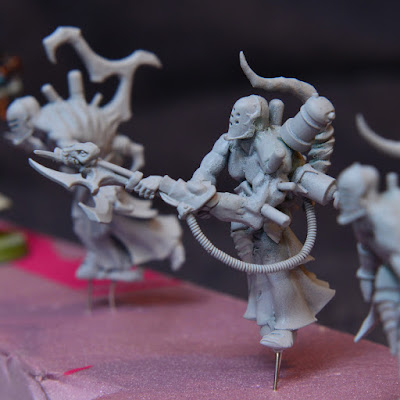