Back to the Coven: A Haemonculus Raider

Well, it's been a BLOODY long time since I posted anything here, and my only explanation/excuse for it was moving between three countries in under a two month span (Japan -> Canada -> England).  Now that I've finally settled here in the UK for the next couple of months, I've been using my free time to get back to work on the Coven.

And I jumped right in with one of my whackier ideas: creating a Haemonculus Coven Raider by crossing it with a Talos. I came up with two separate concepts, and I feel like this is the more normal of the two (I can't wait to get to the second concept as it's a little more grizzly). Here's another time lapse video showing some of my progress on the raider:

Though my first concept for the Coven raider was a Talos fused to the front of a Raider, as if it were driving it or towing it, I wanted to give the thing a slightly different profile than just a Raider+Talos.
To that end, in a fit of creative madness, I hacked the front off a raider, keeping the rear section, and flipped around the upper fuselage. I played with the idea of cutting out some of the fuselage so that more of the rear jets were showing through, but in the end I liked it better intact. 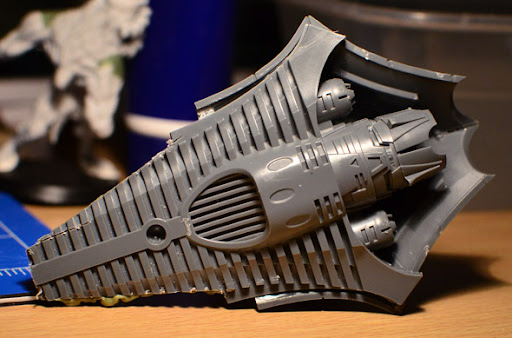 The whole idea of hacking up the Raider was to have it taper more towards the front, where the Talos would be. What's more, as I didn't want it to just be a Talos smacked onto a Raider, I wanted to carry some of the gribbly/alive bits of the Talos into the Raider. I've got a crazy idea of how this cut down Raider is going to be able to carry its passengers/host a trophy rack, and to accommodate those bits I did some organic-looking sculpting across the floor of the Raider. 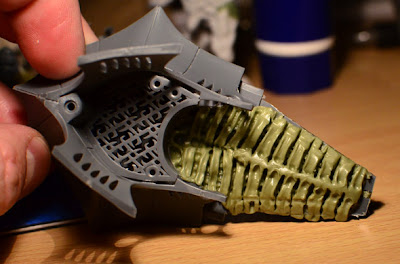 And here are some more looks at the beginnings of the overall revised profile of the craft: 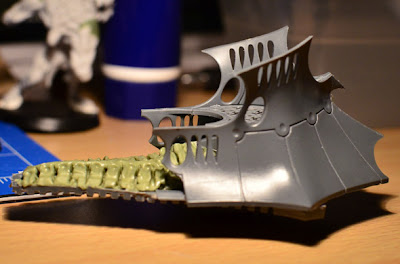 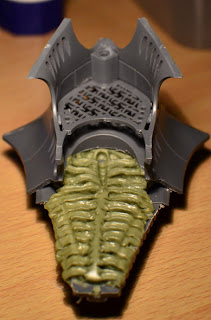 The organic/gribbly bits are a little rough as there will be a number of things sitting above/on top of them. Overall, I think that the front and rear bits of the Raider fuselage (cowling?) are interchangeable enough to flip them around without the giving an "AHH! IT'S FLYING BACKWARDS!" impression.

What's more, once I'd done the changeroo, I had a happy accident and realized that I'd be able to make good use of the fore weapons mount bit to host the "tiller" that allowed a crew member to steer the Talos pilot/engine running the Raider. As this is meant to be a Raider used by freaky Haemonculus kids, I needed a freaky steersman... 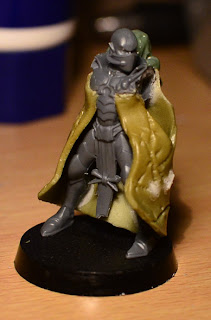 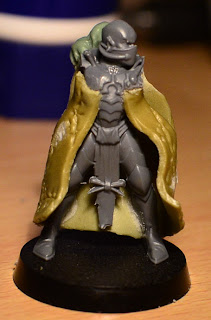 ...and he, in turn, needed a freaky means of steering the craft: 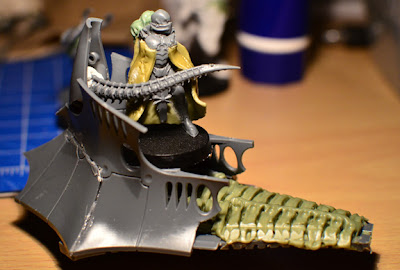 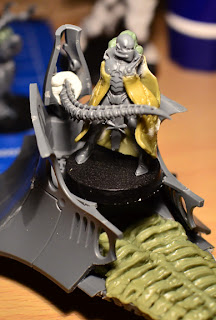 Enter the Spinal Tiller. My idea, basically, is that the Talos has become so integrated with the Raider that  the creature's exposed spine has been worked into both the structure an the control of the craft. This enlarged spine will run the length of the craft from the Talos (over that sculpted biological area), and it will terminate where it curves up and the steersman uses it as a tiller. Nasty, eh? He'll also have a syringe or two on hand so that he can inject the Talos with fun stuff to keep it on task.

The steersman's flayed flesh cloak was my first attempt at doing anything like cloth with a Greenstuff/Apoxie Sculpt hybrid, and though I've got some room to improve, I'm pretty happy with how it turned out. As I'd already mixed the putty and was running out of workable time, I rushed a bit. I'll be sure not to do that when trying to make flayed flesh bits for other members of the Coven.

To get the effect, I used a method I'd seen online somewhere involving saran/cling film, a lubricant (in this case: nivea), and a plasticard pattern for the cloak. First I measured out the cloak pattern using paper and a plastic warrior body for reference: 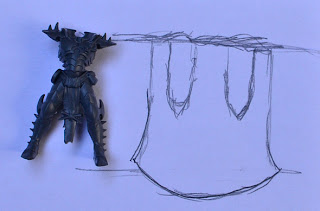 Once I had a paper pattern that seemed to be about the right size, I traced it onto some plasticard and cut it out. I flattened some putty across the lubricated cling film, placed the pattern on top of the putty. Here's a poor photo of it: 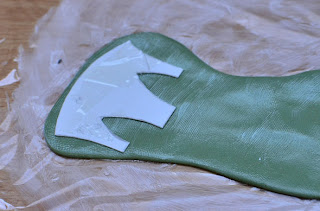 Using a sculpting, tool, I cut around the pattern in the soft putty, removed the excess, took off the plasticard pattern, then sculpted in the detail. I waited for a the putty to set a bit before picking up the cloak and attempting to apply it to the steersman. In fact, I let the putty set a bit too long and had to scramble to clue the cloak in place.

Oh, and once the cloak was in place and dried (with some help from a hot halogen lamp), I went back and sculpted in the beginnings of a Haemonculus-style hump back: 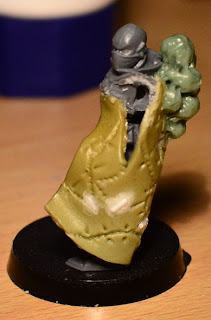 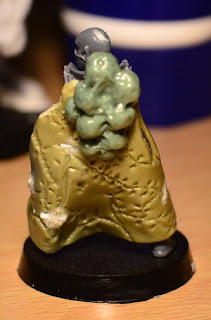 As the Talos would be exposed to a lot of fire driving a raider around, and he wouldn't be having any need of his arms in his newfound role of mindless engine, I made some changes to the Talos torso to armour him up: 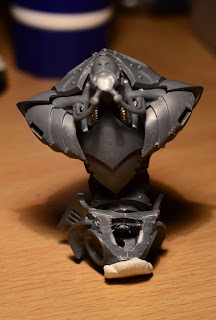 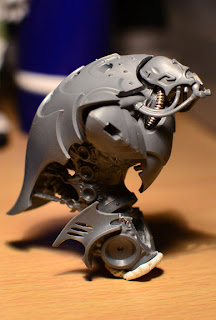 Now he looks a little more capable of taking on the job. There is still more work to be done (filling in those square holes, adding a lot more in the way of cables), but I'm happy with the way that the existing Talos armoured bits fit together so nicely.
Here is a mock up of the full craft in its current state. My next challenge is to figure out how to armour up the front of the craft suitably around the talos as he currently looks somewhat more exposed than I was thinking. 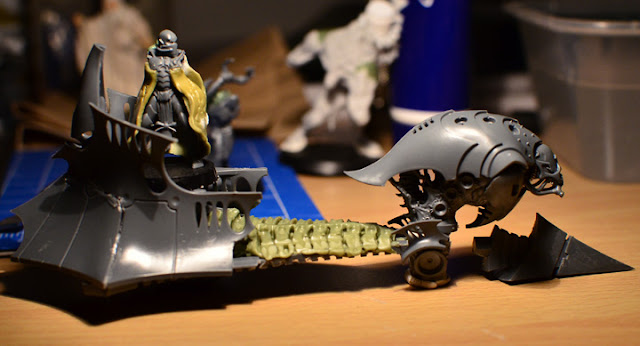