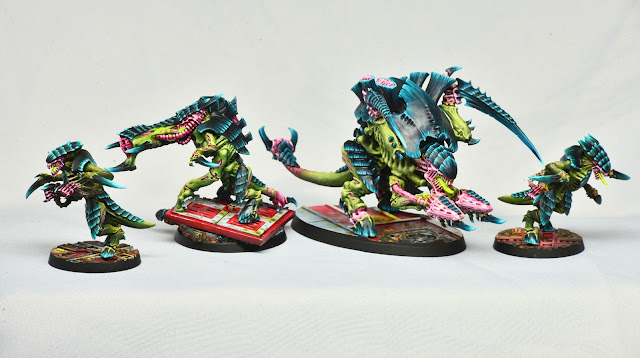 If you've been following me for any time at all, you may know one key fact about me:

I love building, converting, sculpting, but when it comes to painting, my hobby fire tends to dry up. I mean, I managed to grind through painting an entire Genestealer Cult force (helped mostly by an airbrush and a deadline), but, given the choice, I'd rather be sculting!

But then Contrast paints came along. And though they're not the be all and end all that the marketing campaign may have had us believe, they're a neat little hack for skipping a couple of boring steps in the painting process. And I firmly believe that they're the reason I've actually painted some Tyranids for the first time in a decade!

It all started with these two warriors, which I converted up to look a little smaller/slighter than your average warrior so that they could be used by my buddy Matt in our introductory game of Shadow War Armageddon (yes, I know that game is older than dust, but I had the rules and had an understanding of it, so we dusted it off when we played our first game in December of 2019): 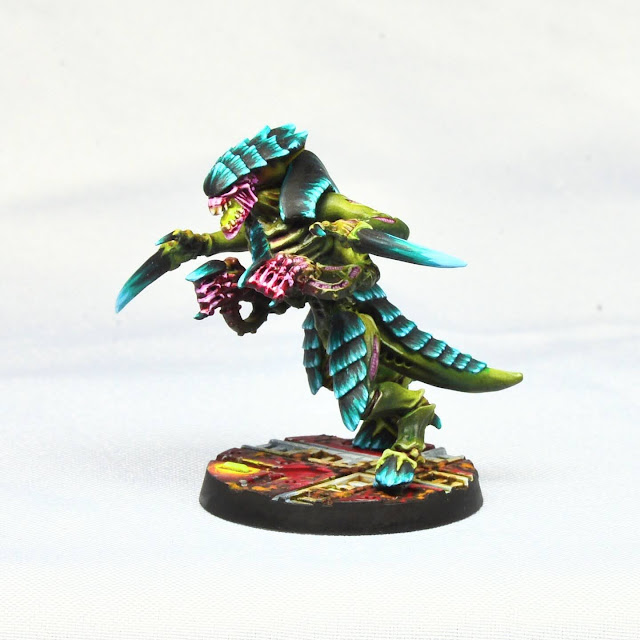 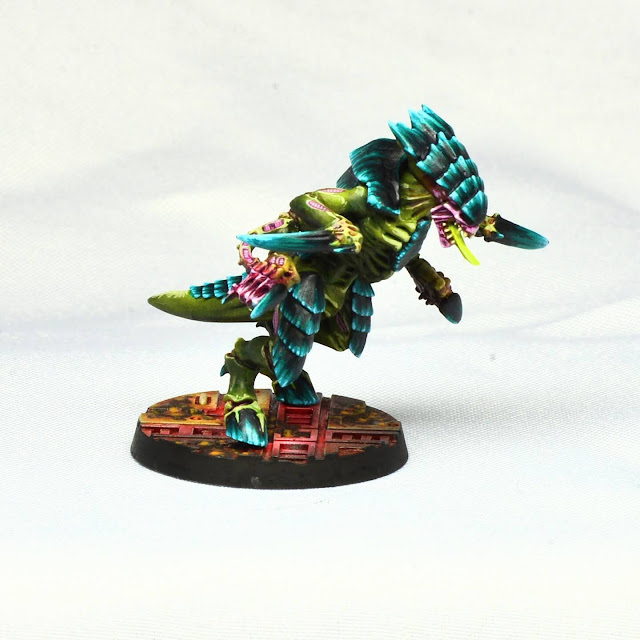 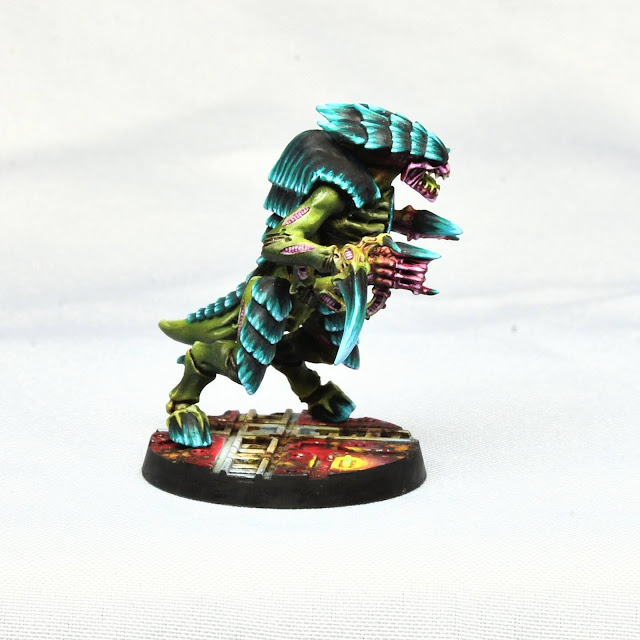 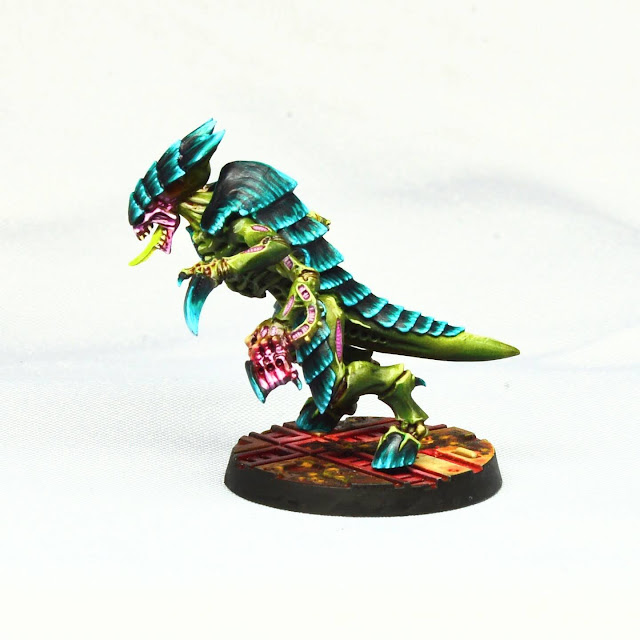 ...and Matt did so well in that first game that he was able to upgrade one of his operatives to be equipped with a venom cannon. Having had so much fun doing up the first two warriors for him, I set to work on making an original venom cannon warrior. Here's how he netted out. 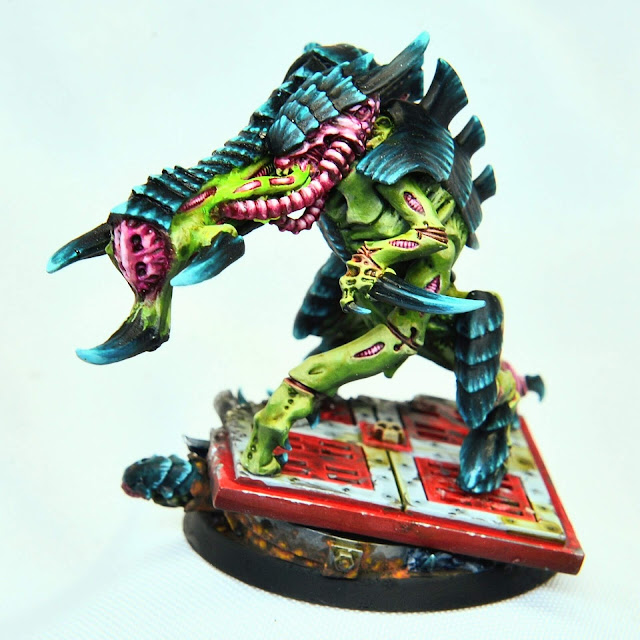 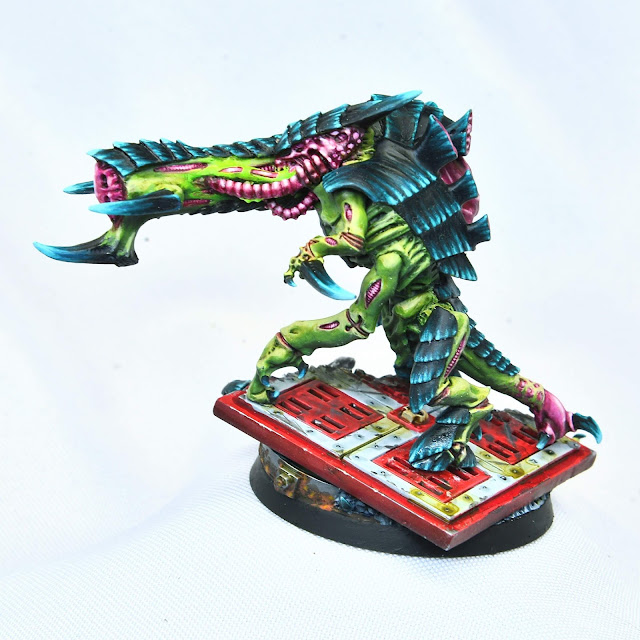 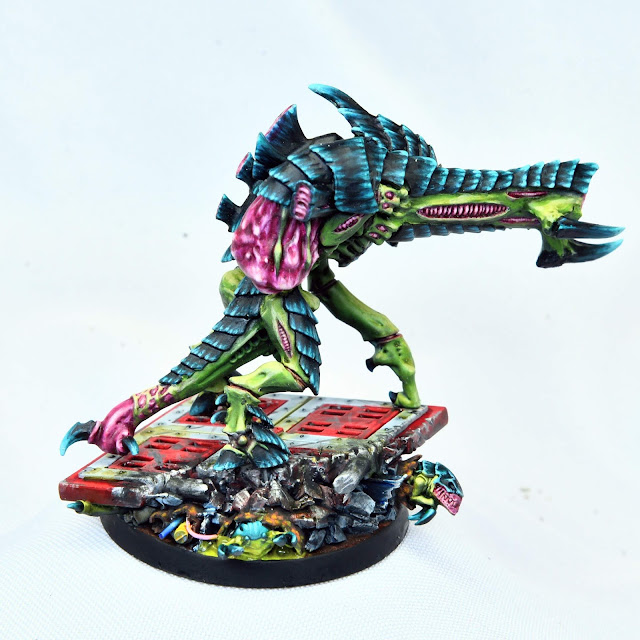 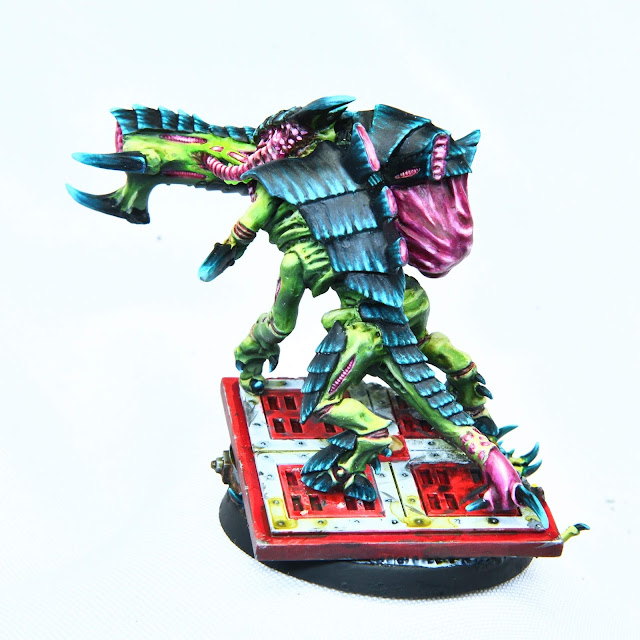 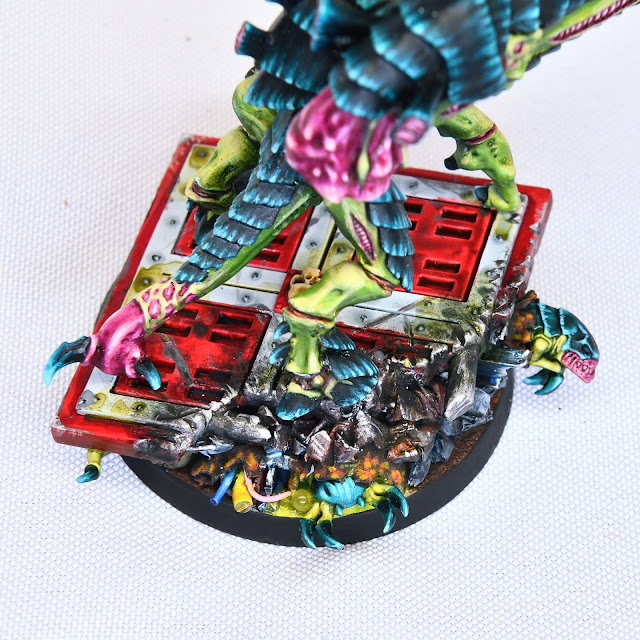 What I enjoyed most about this dude was using him as an excuse to play with my ideas about what a Tyranid warrior that had become specialized for ranged combat would look like. Notice how the combat limbs have atrophied, how the hooves and tail are modified to better secure him for firing, and how the gun itself is melding into his body/head for faster firing.
Here's the warriors all squadded up: 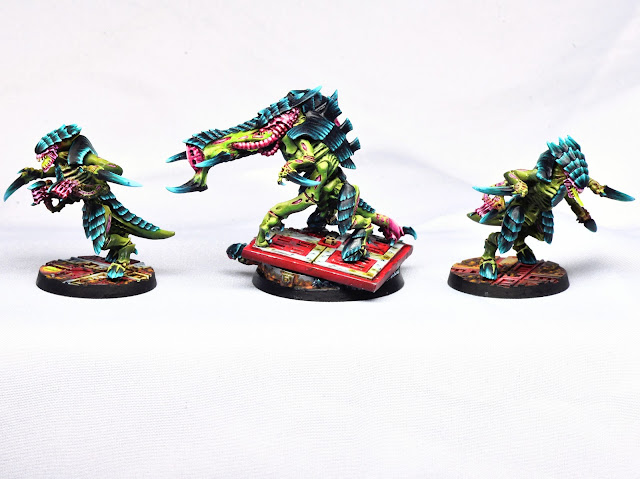 And, once again, I was so inspired by how much fun I was having painting up this new scheme that I decided I should paint my first carnifex ever. Yeah, sounds insane for a model that was released in...2004? But fact is I've converted nearly a dozen carnifexes, but I've never painted a single one of them.
In honour of the wondrous kit Jes Goodwin created back then, and in honour of what good stead it's kept Tyranid modelers in over the intervening years, I assembled this one MOSTLY stock. Just doing a bit of work on the placement of the devourers, and on their size to look like something more befitting a Tyranid Monstrous Creature! 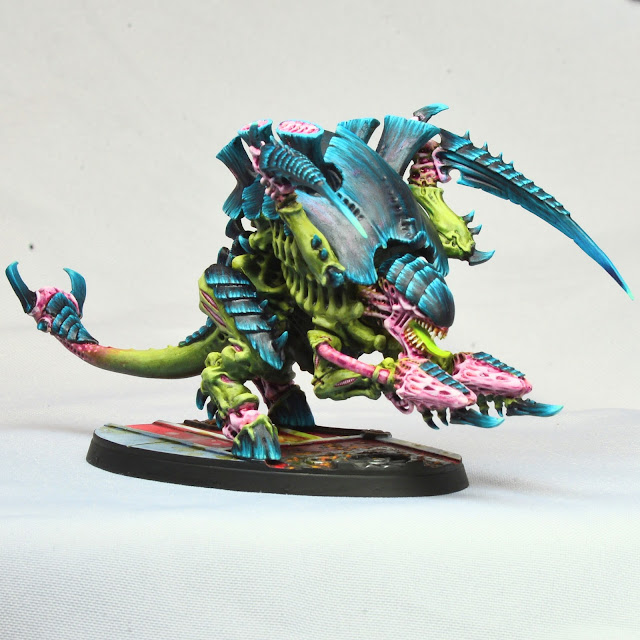 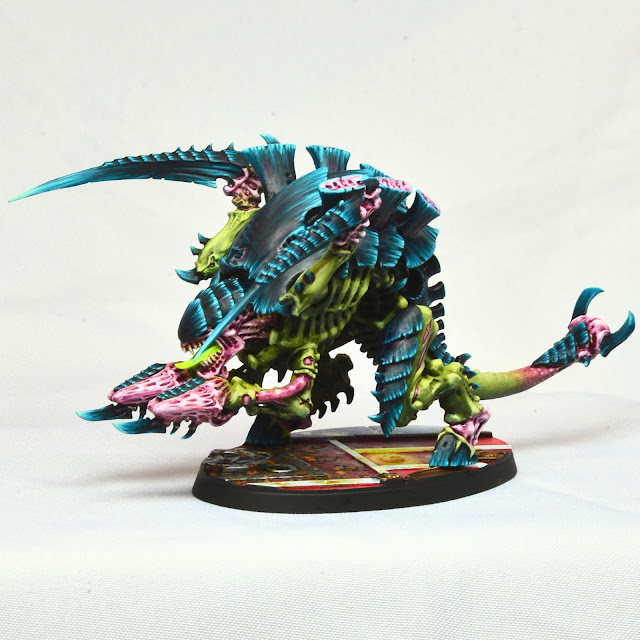 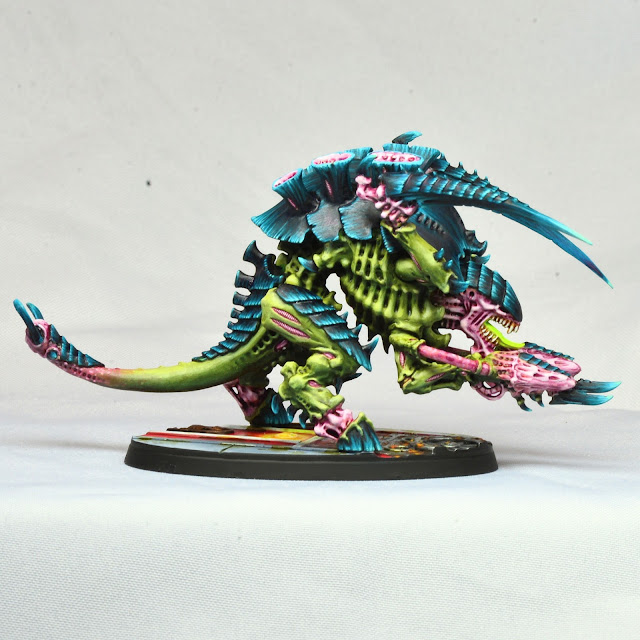 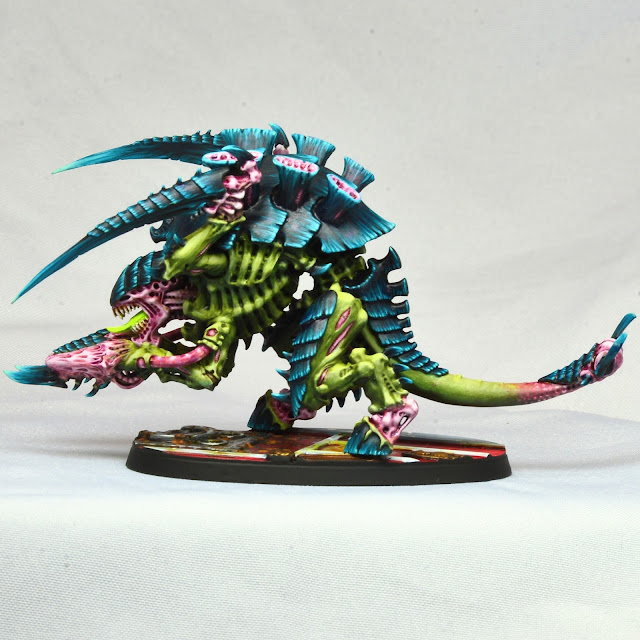 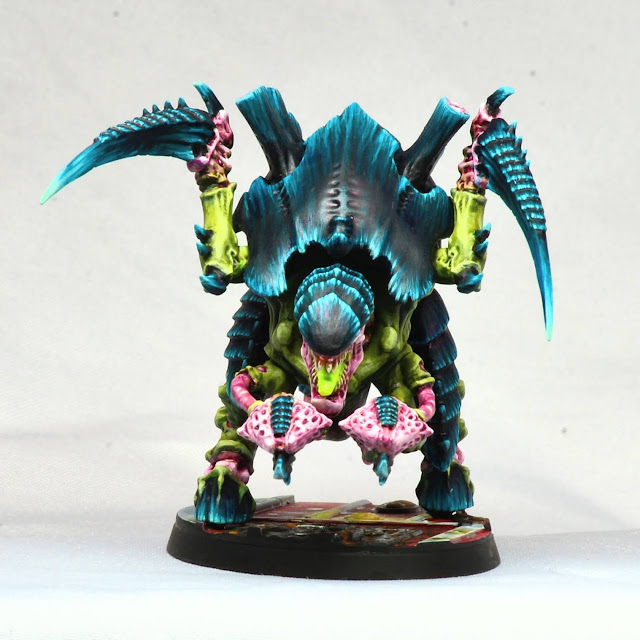 What's the story with "Angrboda"?

Once upon a time, when the 3rd edition Tyranid codex came out, and I realized I needed a name for my hive fleet, my dear cousin linked me to a listing of monster names, and I picked the name Fenrir. I thought the whole prophecy about Fenrir being chained but that one day he'd escape and devour Odin felt a bit like something a hive fleet could do, except gobbling the Emperor instead.
However, I didn't know much about Space Wolves at the time, and I have since learned that they've kind of cornered the market on Fenrir.
However, I'd still dreamed up this crazy fluff about how my hive fleet had been "chained" by having its Norn Queen crash onto a planet. The core of the Norn Queen, which was the bit responsible for the genetic synthesis of new Tyranid strains, was extracted and preserved by the Tyranids that survived the crash, and it became their mission to bring the Queen Core new biomass so it could flesh out its genetic library and complete the process of freeing itself from the planet.
Leading them in this effort would be a sort of Lictor Prime: a Lictor that had grown as large as a Tyrant, with all of the individual abilities and synapse nexus you'd normally expect of a Tyrant. The human inhabitants of the jungle world where the fleet crashed would worship this Lictor, naming it Loki for its clever nature.
And when they witnessed how the Lictor would "commune" with the core of the Norn Queen, implanting her with the genetic matter collected, and witness the new Tyranid Terrors she would birth, they named the Norn Queen the Mother of Monsters.
Or, according to their myths: Angrboda!
Anyway. Just a bunch of fluff for now, but my long game is to convert not only Loki but also the Norn Queen core itself.
But that's a story for another day.

For now, I'm just thrilled to be painting Tyranids again, and am really inspired by my scheme. And coolest of all is that the Games Workshop Community team decided to feature my fleet on their hobby roundup!

You can look forward to seeing more of my nids painted in the Angrboda scheme soon—likely my Tyranid Killteam, the Viridian Stalkers of Casavant Prime.

Let me know what you think of the new scheme?